Secretary of State Mike Pompeo told Congress today that the United States will appeal to the international community to extend the United Nations arms embargo on Iran that is set to expire in October under the terms of the 2015 nuclear deal. 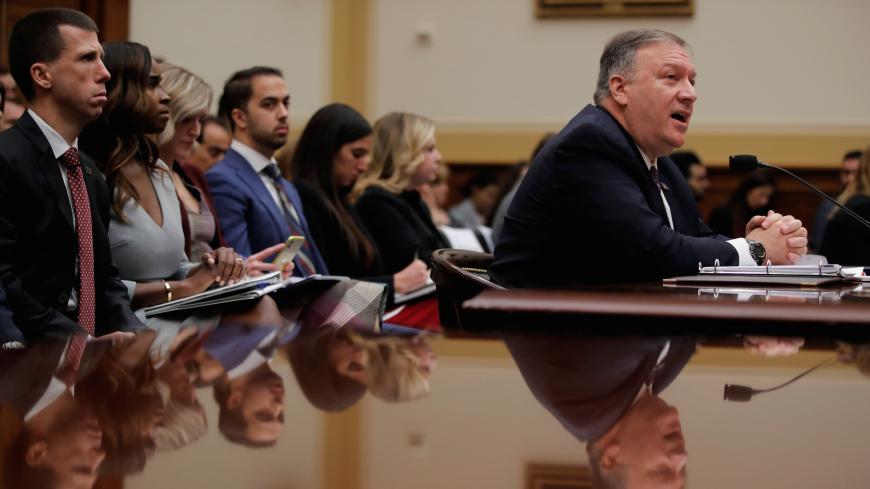 US Secretary of State Mike Pompeo testifies before the House Foreign Affairs Committee hearing on “Trump administration policies on Iran, Iraq and use of force.” on Capitol Hill, in Washington, US Feb. 28, 2020. - REUTERS/Carlos Barria

Secretary of State Mike Pompeo told Congress today that the United States will appeal to the international community to extend the United Nations arms embargo on Iran that is set to expire in October under the terms of the 2015 nuclear deal.

“We’re hopeful that the Europeans will take seriously the risk of the Chinese weapons systems, Russian weapons systems, sold to Iran,” Pompeo testified before the House Foreign Affairs Committee. “I am confident that they’re gearing up to deliver those weapons come October.”

Pompeo added that the United States will seek to “convince the Russians and the Chinese not to veto” a UN Security Council resolution to extend the embargo. His comments mirrored similar statements from the State Department’s top Iran diplomat, Brian Hook, at an exclusive Al-Monitor breakfast today.

“It would be diplomatic malpractice to let this arms embargo expire,” Hook told Al-Monitor.

Why it matters:  Iran said last year that China and Russia have proposed fighter jet sales when the arms embargo expires in October. The arms embargo is the first provision of the nuclear accord to expire under the deal’s sunset provisions. However, President Donald Trump withdrew from the deal in 2018 and Tehran announced that it would similarly pull out of the accord after the United States assassinated Iranian Maj. Gen. Qasem Soleimani last month.

What’s next:  Pompeo’s comments immediately prompted Iran hawks to push the Europeans to initiate snapback sanctions on Tehran should the United States fail to extend the arms embargo.

“If it fails, [the United States] will press [the Europeans] to complete snapback,” tweeted Richard Goldberg, who oversaw the White House’s efforts to curb Iran’s weapons program until last month. (Goldberg has since returned to the Foundation for Defense of Democracies, which paid his salary during his time at the White House.)

Hook told Al-Monitor that reinstating UN sanctions on Iran is “something that is available to us,” but noted that the United States is more focused on unilateral actions as part of its "maximum pressure" campaign. For his part, Pompeo told lawmakers, “We will urge our European colleagues to use tools that they have at hand to prevent conventional weapons sales from once again being lawfully sold to the world’s largest state sponsor of terror.”

Know more:  Diplomatic correspondent Laura Rozen has the roundup of Hook’s comments at Al-Monitor’s Middle East Mornings breakfast. And be sure to subscribe to Al-Monitor to receive exclusive invites to Al-Monitor breakfasts with other exclusive guests.