Top US diplomat Brian Hook tells Al-Monitor they are "looking at what we can do” to assist the Iranian people during the coronavirus outbreak and he has confidence in the new Swiss humanitarian channel, but "the regime has first responsibility to its own people." 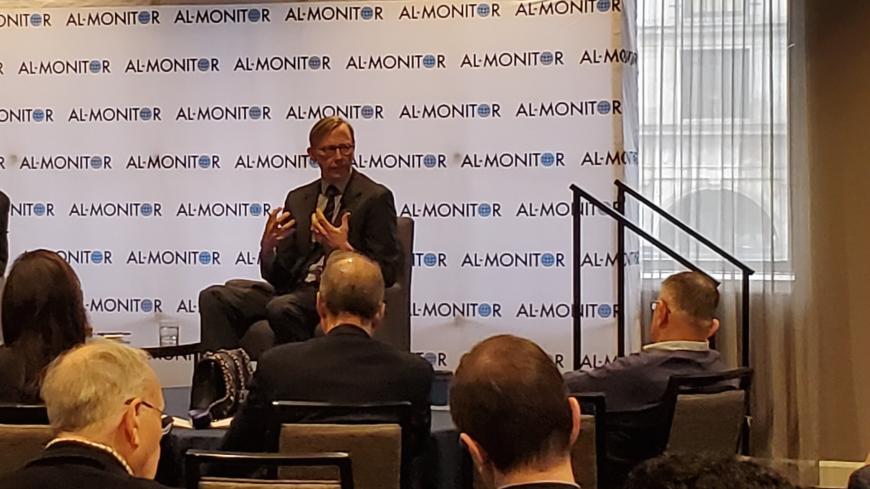 WASHINGTON — Top US diplomat on Iran Brian Hook, speaking at a breakfast meeting convened by Al-Monitor Feb. 28, said the US government is looking at how it might assist the Iranian people during the coronavirus outbreak but it was the Iranian regime that bore primary responsibility for how it managed the crisis.

“We are looking at what we can do,” Hook, the special representative for Iran and senior policy adviser to Secretary of State Mike Pompeo, said in response to the question of whether the United States would issue a general license to facilitate Iran’s procurement of respirators and disinfectant equipment to fight the virus, which Iranian authorities report has killed 34 nationals and infected almost 400. The BBC reported today that it has learned from Iranian hospital sources that the Iranian death toll from coronavirus is 210 so far, compared to the official Iranian government death toll of 34.

“We look for ways to help where we can,” Hook told the Al-Monitor Middle East Mornings event. “But people have to understand, the regime has first responsibility to its own people.”

Hook said the US administration has a lot of confidence in a new Swiss channel to facilitate humanitarian trade with Iran.

“We set up the Swiss channel and already processed a transaction,” Hook said. By contrast, a financing vehicle backed by the European Union to try to facilitate permitted transactions with Iran, INSTEX, “has yet to process a single transaction.”

Hook said it would be “diplomatic malpractice” for a UN arms embargo on Iran to be allowed to expire in October. But he suggested the United States may be looking for other ways to extend it rather than triggering UN “snapback” sanctions itself.

“It would be diplomatic malpractice to let this arms embargo expire,” Hook said. But while triggering UN snapback sanctions is “something which is available to us,” Hook suggested the United States is more focused on the significant impact its unilateral actions have had in bringing economic pressure to bear on Iran.

“We are out of the deal, [and] our energies have been focused on the measures we can do unilaterally,” he said. “We are trying to do what we can with the UN Security Council. … We need to renew [the arms embargo] in October.”

Hook said President Donald Trump is still willing to meet with Iran but has said he will not pay for a meeting — an apparent reference to possible US sanctions relief during talks on reducing tensions previously proposed by French President Emmanuel Macron and others.

“The president said he is not going to pay for a meeting,” Hook told Al-Monitor’s Andrew Parasiliti. “That has been our position.”

“The president is open to a meeting,” Hook continued. “But he is not going to pay for a meeting. We are not in any hurry. We are very comfortable with the strategy success we have had.”

“So much of this is up to the regime,” Hook said.