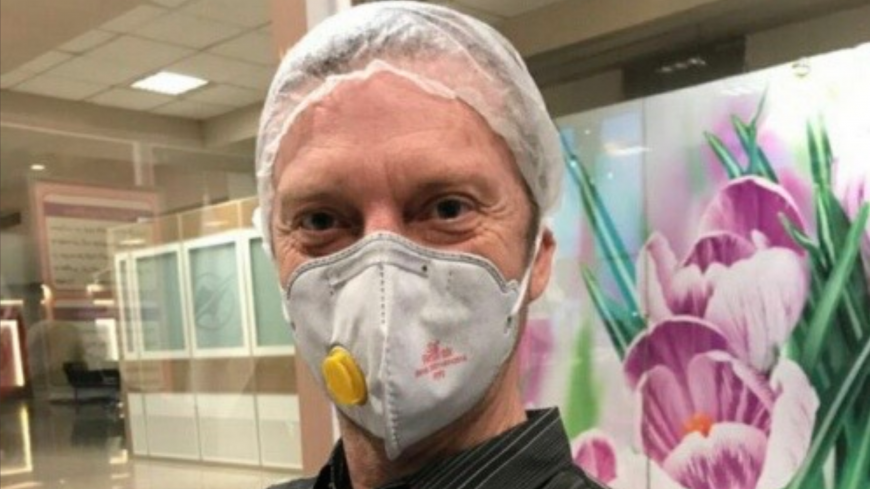 Michael White after being released on medical furlough, March 19, 2020. - TWITTER

Secretary of State Mike Pompeo thanked Swiss authorities for help in facilitating White’s temporary release, expressed hope that it would be made permanent and called again for the release of other US citizens detained or missing in Iran, including Morad Tahbaz, former FBI agent Robert Levinson and Siamak Namazee and his father, Baquer Namazee.

White “was released today on a medical furlough,” Pompeo said in a statement today. “His release on humanitarian grounds was conditioned upon him staying in Iran. Michael is now in the custody of the Swiss embassy and will undergo medical testing and evaluation.”

Jonathan Franks, a spokesman for White’s family, wrote on Twitter that White “has been running a fever the past few days … and has a cough.”

“The United States will continue to work for Michael’s full release as well as the release of all wrongfully detained Americans in Iran,” Pompeo’s statement continued. “We thank the Government of Switzerland for its continued and constructive role as our protecting power in Iran.”

The State Department said it is in daily discussions through the Swiss to try to secure the release on humanitarian grounds of the other US citizens detained in Iran.

“We hope this is the first step,” Brian Hook, the US Special representative on Iran, told journalists today. “Right now, it is just a medical furlough.”

Hook said that he had spoken with White and that he is in very good spirits, but had preexisting medical issues that required attention. Hook said White was released from prison in Mashhad into the custody of Swiss diplomats and was flown to Tehran today, where he can see doctors the Swiss work with.

An Iranian official told Al-Monitor the decision to release White on medical furlough “was purely based on medical and humanitarian considerations."

White, 48, from Imperial Valley, California, served in the US Navy for 13 years. He was arrested in Iran in July 2018 as he and his girlfriend were trying to fly out of Mashhad. In March 2019, Iran’s judiciary sentenced White to 10 years in prison. Pompeo’s statement today said that White had been sentenced to 13 years of prison.

The United States has opened a Swiss channel to facilitate humanitarian transactions with Iran impacted by crushing US sanctions on Iran’s banking sector.

Rob Malley, a former Barack Obama White House Middle East coordinator, and Ali Vaez, the International Crisis Group director of Iran programs, proposed this week that the United States and Iran engage in "virus diplomacy" to facilitate the humanitarian release of US citizens detained in Iran and increased international help to Iran to combat the coronavirus.

“What we suggested … is maybe a two-phase approach, in which, [in the first phase], the Iranians would furlough Siamak Namazee and the other US prisoners … and in return, the US would allow other countries to provide humanitarian assistance to Iran without concern for US sanctions at this moment,” Vaez told Al-Monitor.

In a possible second phase, the US could issue a waiver to not veto an International Monetary Fund loan of $5 billion that Iran has requested, and Iran would permanently release the prisoners, Vaez and Malley proposed.

“It would make it a win-win solution, for both sides, and put more time on the clock, and put the issue on ice for the president [Donald Trump] … in the runup to the US election,” Vaez said.

Hook said he was in daily discussions through the Swiss seeking the release of the other detained US citizens in Iran on humanitarian grounds.

“We recognize the urgency of the situation,” Hook said. “We want these Americans not to be at risk from coronavirus. The fact that the regime has released so many people from jail is an admission by the regime of their concern. We hope that gets applied to Americans in prison.”

“We have offered assistance to the regime,” Hook said. “It has not been accepted.”

Separately, Trump asked Syria in a White House press conference today for the release of US journalist Austin Tice, who was kidnapped while reporting in Syria in 2012.

“Syria, please work with us,” Trump told journalists at a White House briefing on the US government’s efforts to combat the coronavirus. He confirmed that the United States had sent a letter to the government of Syrian president Bashar al-Assad asking for Tice’s release. The Syrian government has not to date publicly acknowledged holding Tice.

In the case of the White furlough in Iran, an attorney for White's family expressed gratitude that White can now receive medical attention and called for his permanent release to the United States.

“Now he can get needed medical attention,” the attorney, Mark Zaid, wrote on Twitter. “We are very grateful. We continue to call for his full release back to US. Thank you to the Swiss government and the State Department for their efforts.”