The UAE, Kuwait and Qatar provide help to Coronavirus-stricken Iran, while there is talk that the United States could ease the way for aid to Iran while Iran released American prisoners who could be prime COVID-19 targets. 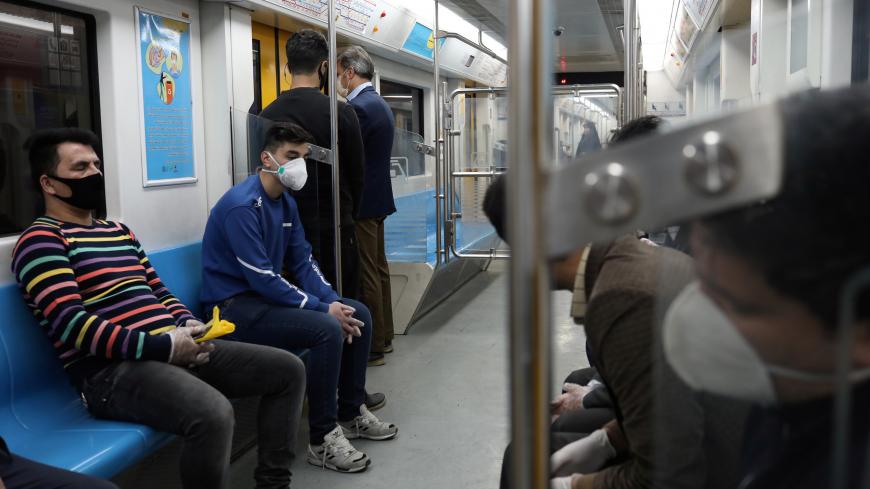 People wear protective face masks as they sit in a metro following the outbreak of the coronavirus in Tehran, Iran, March 17, 2020. - WANA (West Asia News Agency)/Ali Khara via REUTERS

WASHINGTON — The United Arab Emirates, Kuwait and Qatar have reached out to Iran to provide humanitarian assistance to help it combat one of the world’s biggest outbreaks of coronavirus, as some experts and former policymakers urged the United States and Iran to pursue “virus diplomacy” to save Iranian lives.

Iran today reported a sharp 15% spike in coronavirus deaths overnight, saying 147 people had died from COVID-19 in the previous 24 hours. Iran reported that its official death toll from coronavirus was 1,135, and the total number of confirmed cases at 17,361. Some experts believe the actual numbers of those afflicted in Iran may be higher.

The head of the World Health Organization (WHO) praised the UAE and its de facto ruler, Abu Dhabi Crown Prince Mohammed bin Zayed, for a second humanitarian airlift to Iran this week of medical equipment, gloves and surgical masks to combat the respiratory disease.

“Thanks #UAE and @MohamedBinZayed for your continuing support to the #COVID19 response,” WHO Director-General Tedros Adhanom Ghebreyesus tweeted Tuesday. “Solidarity among international communities is of the utmost necessity.”

Qatar said Sunday that it was sending medical aid to Iran, including 6 tons of medical equipment and supplies, Gulf News reported .

Former US Ambassador to the UAE Barbara Leaf praised the humanitarian outreach from the UAE, Kuwait and Qatar to Iran, despite the countries’ overall strained relations.

“It doesn’t surprise me at all that UAE stepped up like this. They really do pride themselves on being very forward-leaning and showing leadership on humanitarian assistance in general,” Leaf, now with the Washington Institute for Near East Policy, told Al-Monitor. “It’s a real pillar of their foreign policy.”

“I thought it was not surprising but gratifying they did so even in the context of pretty strained relations with Iran, but recognizing the unprecedented nature of the crisis hitting the globe — and hitting Iran very frontally,” Leaf continued. “We all know myriad reasons why the Iranian government is stumbling so badly. All that said, the fact that they [the Emiratis], Qataris and Kuwaitis stepped forward, is really admirable.”

Leaf said she has been poking around to see about any specific US government plans to facilitate humanitarian relief to Iran to combat coronavirus, but did not find anything. “I don’t know for the moment of anything we’re doing,” Leaf said. “I don’t know whether we are even contemplating an airlift. … I kind of doubt it,” especially with the US government increasingly focused at home on its own efforts to get a handle on the virus.

Secretary of State Mike Pompeo said that he had spoken with the head of the WHO on Tuesday and said he conveyed a US offer to provide what the agency might need to help Iran combat COVID-19.

“I spoke with the head of the World Health Organization just this morning, Dr. Tedros, where we talked expressly about Iran and how America might be able to help,” Pompeo told journalists at the State Department on Tuesday. “We made a commitment to do everything we can to provide them with all that America can deliver for Iran. … I hope they’ll take us up on these humanitarian efforts, not only us but countries all around the world who want to come help the Iranian people stay healthy and mitigate the risk that’s there.”

Pompeo also said the United States was strongly urging Iran to release detained US citizens, in particular to reduce the risk that they might contract the virus in prison.

“We are communicating with them. We are urging them, as we have done publicly many times, to release every American that is being wrongfully held there as a humanitarian gesture given the risk that is posed to them given what’s taking place inside of Iran,” Pompeo said.

Ali Vaez, director of Iran programs at the International Crisis Group, urged the United States and Iran to consider pursuing a humanitarian deal under which Iran would furlough US citizens detained in Iran in exchange for the United States relaxing sanctions that inhibit other countries from providing aid to Iran to combat the coronavirus.

“What we suggested … is maybe a two-phase approach, in which, [in the first phase] the Iranians would furlough Siamak Namazee and the other US prisoners … and in return, the US would allow other countries to provide humanitarian assistance to Iran without concern for US sanctions at this moment,” Vaez told Al-Monitor, referring to an idea proposed by himself and former Barack Obama administration Middle East coordinator Rob Malley for "virus diplomacy," published in Foreign Policy.

Vaez and Malley proposed that in a possible second phase, the United States could issue a waiver to not veto an IMF loan of $5 billion Iran has requested, and Iran would permanently release the prisoners.

“It would make it a win-win solution, for both sides, and put more time on the clock, and put the issue on ice for the President [Trump] … in the runup to the US election,” Vaez said.

Former USAID official Jeremy Konyndyk said it would make both good policy and humanitarian sense for the United States to provide more humanitarian assistance to Iran.

“I think we should do it now. It is in our humanitarian interests … to prevent more dead Iranians, … period,” Konyndyk told Al-Monitor. This disease “harms a bunch of average Iranians, people whose side we have said we are on.”

Leaf said US interests as well as those of its Gulf allies would actually be undermined if the Iranian regime collapses under the additional strain of the coronavirus.

“The last thing [we should want to hear] is the crashing sound of another regime collapsing, with all the destructive dynamics,” Leaf said. “Collapse is collapse. There are no assurances from such chaotic conditions.”