Iran enlists Pakistan for support against sanctions as pandemic spreads

Iran’s inability to contain the spread of the coronavirus within its borders is endangering the Middle East region and beyond. 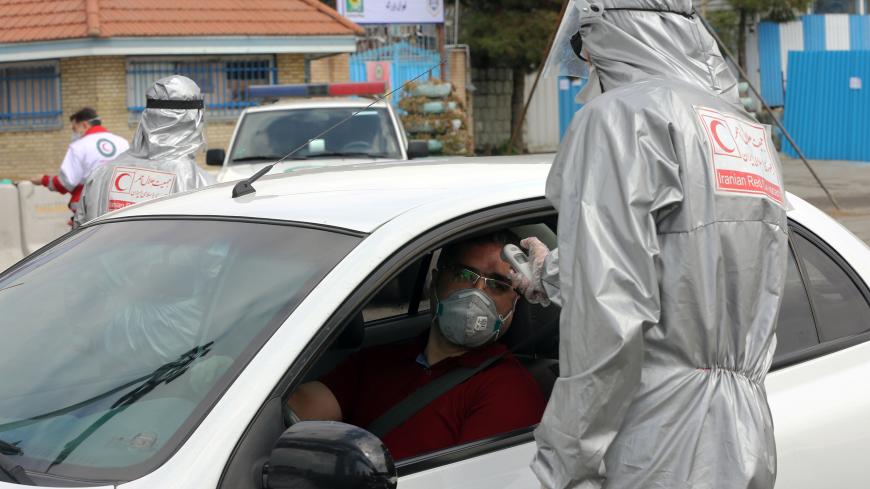 Health officials check the body temperatures of drivers and passengers at the entrance of the capital, Tehran, as a travel ban across the country was issued as a precaution against the coronavirus outbreak, Tehran, Iran, March 26, 2020. - Fatemeh Bahrami/Anadolu Agency via Getty Images

Faced with the ongoing novel coronavirus pandemic, Iranian President Hassan Rouhani recently wrote a letter to Pakistani Prime Minister Imran Khan, asking him to play a role in lifting US sanctions. Since then, Islamabad has speeded up diplomatic efforts to provide relief to Tehran in combating the disease.

“I would stress and insist to the international community to lift the sanctions on Iran,” Khan said recently at a news conference. The global community is fighting an unprecedented pandemic and, in his view, world leaders should show compassion toward each other.

Iran’s coronavirus outbreak has had a major impact on Pakistan, and Islamabad is struggling to control the epidemic with lockdowns all over the country as more than 1,100 cases have been confirmed there. Proactive measures taken by Iran would also help Pakistan by allowing for faster containment of the coronavirus, which knows no borders.

Even though the Pakistan-Iran border is sealed, religious pilgrims returning from Iran glutted the Taftan border quarantine facilities in the province of Baluchistan, resulting in massive chaos and mismanagement. Thousands of untested pilgrims were sent to their respective provinces, where more than 20% of them were discovered to have contracted COVID-19. Not only that, but some of them had escaped from quarantine and become a security risk. In fact, the overwhelming majority of coronavirus cases in Pakistan have been linked to Iran.

Therefore, even though Pakistan has tried to mediate and defuse tensions between the United States and Iran on previous occasions as a friendly gesture, this time Pakistan is facing an emergency. Since February, when the virus was first discovered in Iran, officials there have been avoiding a lockdown on cities and the disease has spread like wildfire beyond its borders to the entire Middle East and Pakistan in South Asia. Right now, most of Iran’s neighbors are struggling to contain the outbreak.

Popular public places like shrines were not closed in Iran even weeks after it was confirmed that pilgrims from neighboring countries had carried the virus back home. Even once some shrines were closed, hard-line Shiite adherents forced their way in.

Notwithstanding Iran’s impact on the region, its Supreme National Security Council is not in favor of a lockdown and has refused several requests by health authorities in badly hit provinces. To impose a lockdown, the government would have to be able to support its citizens. If it gets some relief from US sanctions, Iran could get the medical support it requires and enforce a proper lockdown, save more lives, and provide better facilities for its doctors and health workers.

According to Health Minister Saeed Namaki, the epidemic would last until June even if Iran had the money to get more ventilators, testing kits, protective gear and masks. The outbreak has been ruthless. Iran was approaching 30,000 confirmed cases as of March 26, and 24 Iranian parliamentarians and top officials, including First Vice President Eshaq Jahangiri, have contracted the disease.

Around seven officials and lawmakers, including one adviser to Foreign Minister Mohammad Javad Zarif, have died from the disease. As Tehran Mayor Pirouz Hanachi said, “In a normal situation and a good economy, we could have imposed a lockdown.”

With no containment measures for slowing the transmission speed, the pandemic could create havoc and result in 3.5 million deaths in Iran by the time the virus is expected to peak in May. If that happens, the death toll would be three times more than Iran had to bear during its eight-year war with Iraq.

The economic sanctions restrict Iran’s access to its financial assets in other countries, prevent bank transfers and deprive it of export earnings. The United States even placed some new sanctions on Iran, even as it offered to help in containing the outbreak there.

Special Representative for Iran Brian Hook said at a news conference last week that “US sanctions are not preventing aid from getting to Iran.” The sanctions are designed to pressure Iran to renegotiate its 2015 nuclear deal with world powers.

Regarding the virus outbreak, Washington has accused Iran of a lack of transparency and asked Tehran to release US prisoners as a humanitarian gesture during the ongoing crisis. As the virus has spread throughout the country, Iranian authorities recently decided to temporarily release nearly 70,000 prisoners, as jails are especially risky places in an epidemic.

When the number of reported confirmed cases in Iran crossed 10,000 in early March, Central Bank of Iran Gov. Abdolnaser Hemmati wrote to the International Monetary Fund seeking $5 billion in emergency funding from its recently announced Rapid Financing Instrument for countries affected by the coronavirus. Considering the last time Iran asked the fund for a loan was in 1962, this was a significant move. The European Union said March 23 it would back Iran’s request.

Ultimately, Iran’s failure to contain its health crisis is going to have widespread repercussions for many Middle East countries, and US military officials fear Iran’s situation is much worse than officials there have admitted.

As Gen. Kenneth McKenzie, commander of US forces in the Middle East and South Asia, said in a legislative briefing in early March, “Iran sits in the middle of the [Middle East] theater, so [its] ability to pass that infection to other states is very worrisome.” He noted the “permeability and porousness” of borders. He also expressed concern that Iran’s leadership might consider a military distraction from the domestic crisis.