Pakistan seeks to control spread of virus from Iran

Pakistan kept its border open with Iran, a COVID-19 hotspot, perhaps longer than it should have and is now screening thousands of its citizens returning from pilgrimages for the new coronavirus. 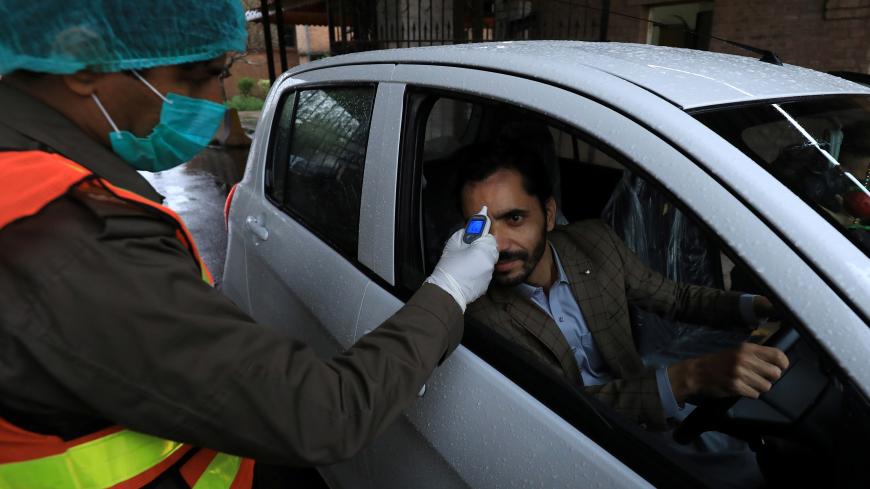 A rescue worker wears protective gloves as he checks a man's temperature amid coronavirus fears at the entrance of a government office building, Peshawar, Pakistan, March 12, 2020. - REUTERS/Fayaz Aziz

As of March 12, Pakistan had reported just 21 coronavirus cases of the new coronavirus, but the country’s shared border and trade activity with Iran has officials concerned as a number of the Pakistanis who have been infected had traveled to Iran.

Iran reported March 12 that its official number of COVID-19 cases had jumped by 1,075 over 24 hours to reach 10,075, with 429 deaths. Iran was one of the first countries to report an outbreak, possibly because of its strong trade links with China, the epicenter.

Many citizens travel between China and Iran throughout the year. According to the Iran-China Chamber of Commerce, a quarter of Iranian trade is with Beijing and since Iran is under severe US economic sanctions, Tehran initially was reluctant to take actions that would slow down trade.

Qom, one of Iran’s holiest cities, became a second epicenter for the virus. Qom is also a business center, as it is only about 90 miles from the capital. In addition, millions of Shiite pilgrims from all over the world frequent the Qom shrines as part of religious rites, while thousands of foreign students stay in the city.

Even so, no lockdown or quarantine was enforced in the city of shrines. Undoubtedly, Tehran was slow in implementing travel and quarantine restrictions. It announced the first confirmed cases of COVID-19 just after the Feb. 21 legislative elections. The epidemic could not have happened at a worse time, as Iran’s economy contracted by 9% last year in the aftermath of reimposed US sanctions. Since the outbreak, Iran’s currency has lost value and Tehran faces falling into an even greater recession unless the virus is quickly brought under control.

Pakistan halted both air and land links with China and has been trying its best to keep the virus out. But Pakistan kept its border with Iran open initially, as isolation would have worsened the latter’s already-severe economic problems.

Unfortunately, that delay in closing the border threatens to present a public health emergency that Pakistan is ill-equipped to handle. Pakistan’s health authorities are trying to track down nearly 8,000 pilgrims who returned recently from Iran. Since closing the border, Pakistan has allowed some citizens to return from Iran in batches, screening them as they enter. At times nearly 3,000 have been quarantined in Pakistani facilities at the Taftan border crossing.

Even now, thousands of Pakistanis are in Iran for business or pilgrimages and Qom is not in lockdown. Videos of pilgrims kissing the windows of tombs and shrines keep appearing on social media. Pakistan has been preparing for the return of the rest of its Shiite pilgrims and is trying to screen and quarantine them as soon as they enter.

The terrain along the 959-kilometer (nearly 600-mile) Pakistan-Iran border makes it difficult to monitor and Pakistan also has struggled to control what was a constant flow of people and goods through border gates.

Usually, three Iranian airlines run seven flights a week to and from Pakistan, but business has come to a standstill except for what can be conducted online, or otherwise without people-to-people contact. Trade volume between the countries has become negligible.

Some Pakistani traders who export produce to Iraq and Azerbaijan through Iran stood to lose 400 million rupees ($2.55 million) daily due to the total suspension of Pakistan-Iran trade, so they instead began using a sea route. That option is more expensive, but better than a total loss.

Nevertheless, the traders support the border closure, and Waheed Ahmed, the head of their trade union, said in a statement, “If the coronavirus spreads in Pakistan, our trade with other countries would be directly affected because foreign nations will avoid buying from us. Therefore, this temporary halt is good in the longer run.”

Recently, Pakistani Foreign Minister Shah Mahmood Qureshi spoke with his Iranian counterpart, Mohammad Javad Zarif, to express Pakistan’s full support in coping with the crisis. They agreed to work together to contain the epidemic.

The countries also have agreed to try to improve bilateral relations in other ways.

Currently, the trade volume between Iran and Pakistan is just $5 billion. To increase bilateral trade ties, the Iranian government recently expressed the desire to open banking channels with Pakistan. Meeting with senior officials of the Lahore Chamber of Commerce and Industry, Iran’s envoy to Islamabad, Mohammed Ali Hosseini, pegged the lack of those channels as the main obstacle to enhancing trade relations and economic cooperation.

Accompanied by a delegation from the Tehran Chamber of Commerce, the envoy also offered Iran’s help in meeting Pakistan’s energy needs and improving the tourism sector. A joint information and technologies working group has also been established as an adjunct unit of the Iran-Pakistan Border Trade Committee.

Adjusting its trade strategy since the US sanctions, Iran has switched focus to more regional partners. Unfortunately, the ongoing pandemic has caused most of Iran’s major trading partners, including Turkey, Iraq and Afghanistan, to close their borders and scale down economic interaction. And Iran can’t yet normalize its trade flow with China.

As this public health crisis spins out, there are serious risks of it turning into a national security matter as well.