Brian Hook, the US special envoy on Iran, said any new agreement with Iran would have to curb Iran’s transfer of ballistic missile technology. 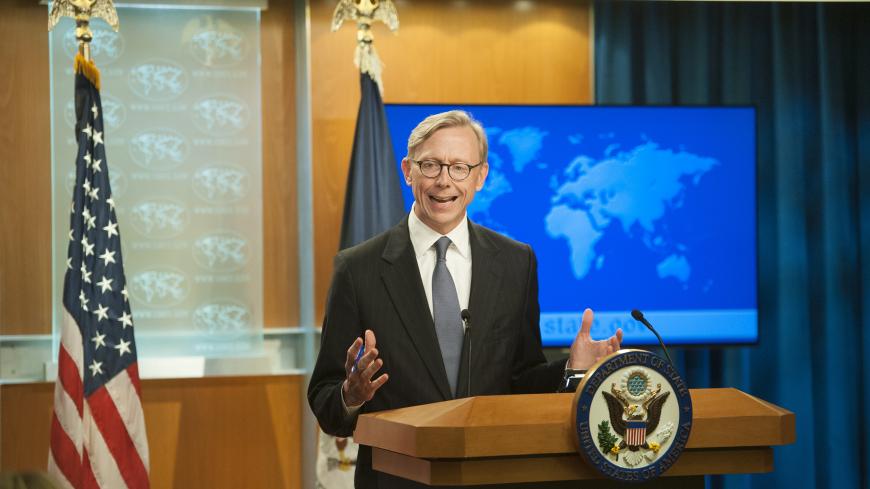 Brian Hook fields questions from journalists during the announcement of the creation of the Iran Action Group at the Department of State in Washington, DC, Aug. 16, 2018. - Rod Lamkey/Getty Images

WASHINGTON — Brian Hook, the US special envoy on Iran, cited Iran’s continuing development, testing and transfer of ballistic missile technology as a key flaw of the 2015 Iran nuclear deal that President Donald Trump withdrew from in May.

Speaking this morning to the conservative Hudson Institute, Hook repeated many of the US administration’s previous critiques of the Joint Comprehensive Plan of Action (JCPOA), from its sunset provision to its failure to address Iran’s support for terrorism and militant proxy groups in the region.

Hook said the Trump administration would still be willing to negotiate with the Iranians on a treaty to address its wider concerns, but he suggested little expectation that the Iranians would take up the offer soon, even as further, tougher US sanctions on Iran’s oil exports come into effect over the coming months.

“The president and secretary have all made clear we are ready to negotiate and to have those discussions,” Hook said.

With both Trump and Iranian President Hassan Rouhani, as well as Secretary of State Mike Pompeo and Iran Foreign Minister Mohammad Javad Zarif, slated to be in New York for the opening session of the United Nations General Assembly next week, there has been some speculation about whether the Iranians might take Trump up on his offer for talks. But Hook said, as of yet, the Iranians have rejected the offer.

“I think the ayatollah and the president and foreign minister have all indicated that they are not interested in talking,” Hook said, referring to Iranian Supreme Leader Ayatollah Ali Khamenei, Rouhani and Zarif. “That is their position. We respect that. Though that does not change our plans. We have a sanctions regime that is underway, the stronger measures are yet to come.”

“There has not been any aversion to meeting with the Iranians,” Hook added, noting that he met briefly with his counterpart, Iranian Deputy Foreign Minister Abbas Araghchi, on the sidelines of a Joint Commission meeting in Vienna last December, when the United States was still in the deal. “I have done it.”

“We have made it very clear — we can’t be more clear — about the sort of things that we would like to see changed, and in return these are the things we are willing to offer,” Hook said. “And that is where it is.”

Hook said any future deal the Trump administration would consider making with Iran must constrain its ballistic missile program as well as its nuclear program.

“Iran must end its proliferation of ballistic missiles and halt further launching or development of nuclear-capable missile systems,” Hook said. “The nuclear issue has to be addressed together with Iran’s missile proliferation.”

“But the JCPOA separated these two issues,” he said. “It removed Iran’s missile development from the equation … it focused on restraining one facet of proliferation at the expense of another.”

But in the question and answer session, moderated by Hudson Institute scholar Rebeccah Heinrichs, Hook referred repeatedly to intercontinental ballistic missiles (ICBMs), something that missile experts say Iran neither possesses nor is actively developing.

“It was a mistake not to include ICBMs in the Iran nuclear deal,” Hook said. “Nukes and ICBMs go hand in hand. They don’t ever travel apart.”

Michael Elleman, senior fellow for missile defense at the International Institute for Strategic Studies, said the remark puzzled him.

“I have seen no solid or convincing evidence to indicate Iran is actively working to develop an ICBM,” Elleman told Al-Monitor. “However, there are some worrying observations and rumors that suggest Iran is keeping open the option to develop an ICBM if it deems necessary.”

While Hook said the Trump administration stands with Iranian protesters demanding changes from the Iranian regime, he and the Hudson moderator looked embarrassed when Code Pink anti-war protester Medea Benjamin got on the stage behind them, shouting that the Trump administration's hard-line policies on Iran would lead to war, and waited for security to remove her.

“The world community wants to keep the deal,” Benjamin said. “You are making a case for war with Iran. … We don’t want another war in the Middle East.”

The Hudson Institute later edited out the protest from its video of the event, but a video clip was posted by Iranian American journalist Negar Mortazavi.