Experts say Iran’s missile program should not be an impediment to a comprehensive nuclear deal, but that Iran should be encouraged to keep its pledges not to build long-range ballistic missiles. 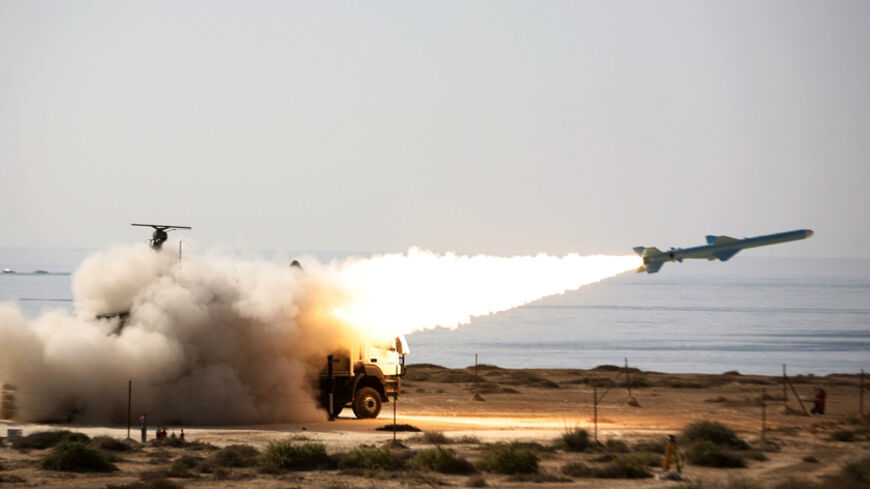 An Iranian long-range shore-to-sea missile called Qader (Capable) is launched during the Velayat-90 war game on the Sea of Oman's shore near the Strait of Hormuz, Jan. 2, 2012. - REUTERS/Jamejamonline/Ebrahim Norouzi

While attention has focused on curbing Iran’s ability to produce fissile material for a nuclear weapon, sanctions, sabotage, technical problems and political calculation have combined to set back Iran’s development of missiles that could potentially deliver such a weapon.

Michael Elleman, an expert on missiles at the International Institute for Strategic Studies, told Al-Monitor in an interview Dec. 16 that the Iranians are “a little bit behind where I thought they would be” in developing missiles with a range beyond 1,500 kilometers (932 miles), and have focused instead on trying to improve the accuracy and lethality of systems with a range of less than 250 kilometers (155 miles).

Elleman credited several factors in slowing Iran’s progress toward longer-range systems. Among them: international efforts to intercept key ingredients — such as aluminum powder for solid propellant fuel; the death in a 2011 explosion of the missile program’s architect, Maj. Gen. Hassan Tehrani Moghaddam, and a dozen of his colleagues; and a likely Iranian desire to avoid provoking the international community by testing longer-range rockets.

Four years ago, Elleman had projected that the Iranians would be able to deploy the Sajjil-2, a two-stage, solid-fuel rocket with a maximum range of about 2,000 kilometers (1,243 miles), by 2013. But the missile, which is produced using Chinese-supplied infrastructure and manufacturing equipment and has been under development for nearly a decade, has not been flight-tested since 2011.

UN Security Council Resolution 1929, enacted in 2010, bars Iran from developing and testing “nuclear-capable” ballistic missiles. Even more than the sanctions themselves, however, the creation of a UN panel tasked with overseeing efforts to intercept missile parts and other related supplies has impeded advancement of the Sajjil-2, Elleman said.

“If there’s one [factor] that dominates, it’s the inconsistent supply of ingredients because of sanctions,” he told Al-Monitor. He said that Iran has had to scramble to get aluminum powder for solid fuel from different sources.

“There are always slight variations and then when they do testing, they can’t eliminate a variable which is the ingredients themselves,” he said. “It makes it very difficult to fully develop a large, complex system under those circumstances.”

Reports in the Iranian press assert that the country’s scientists are working on a four-stage solid-fuel rocket known as the Qaem, intended to be able to launch a satellite into an orbit 1,000 kilometers (620 miles) above Earth. The reports also refer to the system as a “deterrent,” suggesting that it has purposes beyond civilian space launches.

However, Elleman said that while such reports deserve close monitoring, the rocket has not been flight-tested.

“I’m skeptical but I don’t dismiss it out of hand as a possibility,” Elleman told Al-Monitor. “If they haven’t completed the development of the Sajjil-2, why would they go to something much larger?”

The Sajjil, he noted, has a motor that weighs 14 tons, while a four-stage system would require a motor of 24-30 tons. “That is a qualitative leap that has taken other countries eight to 12 years to master,” he said.

Iran has also yet to test a space launch vehicle called the Simorgh, which was unveiled with much fanfare in 2010.

Still, there is much about Iran’s missile program that makes sense if the goal is to achieve a hedging strategy and latent nuclear weapons capability.

As Elleman has noted, no country has tried to develop an intermediate-range ballistic missile such as the Sajjil-2 without first having acquired nuclear weapons. “Seeking still-longer-range delivery vehicles only would increase existing doubts about Iran’s nuclear intentions,” Elleman wrote in an article for the Arms Control Association in 2012.

Elleman told Al-Monitor that “my hunch is that they have a larger system” based on the engine of a Nodong, a never-deployed Russian missile related to the 1950s-’60s Scud. The Iranians may have “strapped on booster rockets for the first stage … to get extra lift capability,” he said.

The Iranian program has frequently been hyped in the past — by Iranians and non-Iranians. In 1998, a commission headed by Donald Rumsfeld — at the time out of government — declared ominously that Iran “now has the technical capability and resources to demonstrate an ICBM-range ballistic missile … within five years of a decision to proceed.”

Iranian officials insist they have no intention of building an intercontinental ballistic missile system — which would have a range of 10,000 kilometers (6,213 miles) and could reach the United States. Elleman pooh-poohed claims by Israeli officials, including Prime Minister Benjamin Netanyahu, that Iran was close to acquiring such technology. Elleman said Iran could develop an operational ICBM no earlier than 2020.

Iran, Elleman said, appears to be focused more on the “tactical benefits of ballistic missiles as opposed to the strategic” benefits accrued by having ICBMs. The Sajjil-2 and a one-stage missile, the Ghadr, which Iran has tested successfully, have sufficient range to hit Israel, which Iran hopes would deter an attack on its nuclear installations, he said.

Scud missiles acquired from Syria, Libya and North Korea during the Iran-Iraq war could threaten Arab capitals across the Persian Gulf. Shorter-range missiles such as the Fateh 110, whose accuracy Iran has been seeking to improve, could hit troops massing to invade Iran from Iraq or Kuwait and could also strike parts of the United Arab Emirates. Elleman added that Iran was also looking to develop cruise missiles.

Iran’s missile program should not be an impediment to reaching a nuclear deal, Elleman said, but could be discussed in parallel talks or after conclusion of a comprehensive nuclear agreement. Such an agreement would entail lifting UN sanctions that have inhibited procurement of missile supplies as well as technical assistance from foreign countries such as Russia and China.

While Iran is unlikely to relinquish its missile arsenal because it lacks other means, such as advanced bombers that can strike far outside its territory, it might be persuaded to accept limitations on missile range to 3,000 kilometers (1,864 miles) or less if others in the region such as Saudi Arabia and Israel agree to this as well, he said.

Greater transparency about weapons systems could also help decrease tensions between Iran and its neighbors.

According to Nadimi, another confidence building measure would be to put Iran’s space launch vehicle program under civilian control. In return, he says, Iran could be offered assistance in peaceful space exploration.

Elleman said he does not approve of material assistance to Iran’s space efforts from Russia, China or any other country. But he has suggested that Middle Eastern countries could establish a joint authority to oversee space-related activities and even arrange reciprocal visits by members to observe launches. Iran has declared its intention to put a man into space by the end of the decade, a goal that Elleman described as “very ambitious.”