AIPAC gets Democrats to help Trump chip away at nuclear deal

AIPAC is marshaling significant bipartisan backing for a bid to extend the Iran nuclear deal’s first sunset provision as hawks push for snapback sanctions at the United Nations. 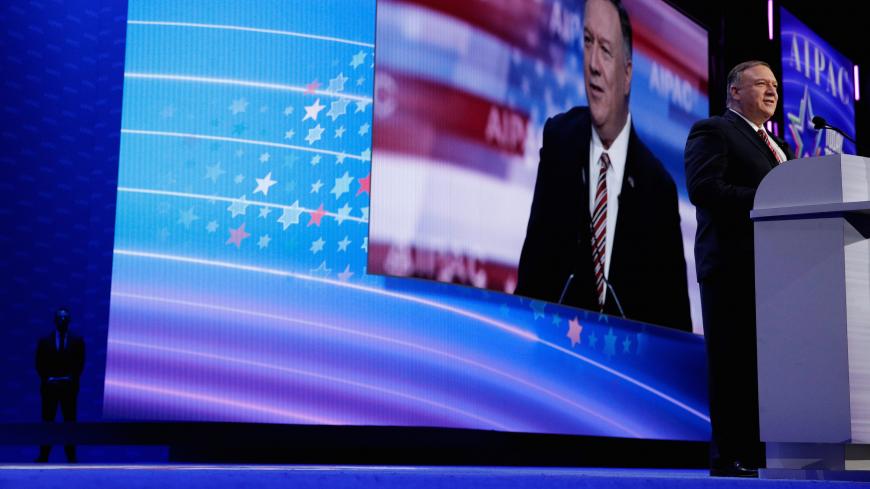 US Secretary of State Mike Pompeo delivers remarks during the AIPAC convention at the Washington Convention Center in Washington, March 2, 2020. - REUTERS/Tom Brenner

The American Israel Public Affairs Committee (AIPAC) lost a bruising battle with President Barack Obama in 2015 when it failed to stop the Iran nuclear deal after spending millions and alienating large swaths of the Democratic party.

But now that the nuclear deal is on life support, the influential lobby group is mustering significant Democratic support for President Donald Trump’s campaign to undo a key provision of the accord at the United Nations. Thousands of AIPAC activists convened on Capitol Hill this week to ask lawmakers to support extending the UN conventional arms embargo on Iran, which expires in October as the first sunset provision in the nuclear deal.

The push to extend the sunset provision has even generated support among nuclear deal proponents on Capitol Hill, in part because Iran said it would not comply with the deal's requirements following the Jan. 3 killing of Iranian military commander Qasem Soleimani. The step came amid President Donald Trump’s maximum pressure campaign on Tehran following US withdrawal from the accord.

“The reality is the nuclear deal doesn’t exist today,” Sen. Chris Murphy, D-Conn., the top Democrat on the Middle East panel, told Al-Monitor. “You have to live in that reality. I don’t think it’d be great policy to let the embargo disappear if we’re not in the [deal]. So, I’m generally sympathetic to the idea that we’re going to need to re-up it and be back in a position to negotiate with the Iranians in the next administration.”

Secretary of State Mike Pompeo and the State Department’s top Iran diplomat, Brian Hook, both announced Friday that the United States would seek a UN Security Council resolution to extend the Iran arms embargo before it expires in October. Iran has claimed that both Russia and China have expressed interest in selling arms once the embargo expires.

In a bid to bolster Trump’s efforts, AIPAC is asking lawmakers to co-sponsor a bipartisan resolution calling for an arms embargo extension, introduced by Sens. Pat Toomey, R-Pa., and Jacky Rosen, D-Nev. A bipartisan group of 16 senators have already co-sponsored the resolution.

AIPAC has not asked for an equivalent resolution in the Democratic-held House and has instead asked lawmakers to sign onto a letter urging Pompeo to seek a UN arms embargo extension, authored by House Foreign Affairs Committee Chairman Eliot Engel, D-N.Y., and top Republican Mike McCaul, R-Texas.

But some Obama-era negotiators and anti-war groups fear that extending the arms embargo makes a potential revival of the nuclear deal less likely, even if Trump loses his reelection campaign in November.

“My view is that it is categorically true that the expiration of the arms embargo was a reasonable concession to make for all the nuclear limits that Iran was giving up on in the [deal],” said Jarrett Blanc, who oversaw the nuclear deal’s implementation under Obama. “I believe it remains a reasonable concession as a means to keep alive a version of the [deal] to return to future diplomacy. And I think it’s important to note that it’s easy to demagogue the arms embargo, but its practical effect is fairly limited.”

Blanc told Al-Monitor that even if the embargo expires, additional restrictions on the sale of surface-to-air defenses to Iran would remain.

And some anti-war groups worry that the Trump administration and AIPAC are using the arms embargo as a ploy to reinstate UN sanctions on Iran in addition to the crippling US sanctions already in place.

Hassan El-Tayyab, the legislative manager for Middle East policy at the Friends Committee on National Legislation, told Al-Monitor that Democrats “are inadvertently agreeing to things that sound good on their face but could put the death knell on the [nuclear deal].”

El-Tayyab noted that the State Department released a legal opinion in December arguing that the United States could pursue UN snapback sanctions — which could not be vetoed at the Security Council — even though it has withdrawn from the accord. The Associated Press reported at the time that the legal opinion was a concession to Iran hawk Sen. Ted Cruz, R-Texas, to release his hold on the nomination of Stephen Biegun to serve as Pompeo’s deputy.

“It’s not a legal question,” said Blanc. “This is fundamentally a political question. We don’t know if they could pull this off: Maybe it could, maybe it couldn’t. Certainly, if they did, it would be a very bloody and bruising fight.”

Other Iran hawks have instead called on the European signatories to the deal to trigger snapback sanctions after they activated the dispute resolution mechanism in January following Tehran’s decision to further de-commit from the pact.

“The Europeans absolutely promised us that they would hold the Iranians to their commitments, and that they would implement snapback sanctions if indeed they stepped out of line from the agreement,” Senate Foreign Relations Committee Chairman James Risch, R-Idaho, told Al-Monitor in an interview last month. “And lo and behold, they’re not. They continue to drag their feet. They continue to play footsy under the table with them, and frankly it’s very difficult to understand why.”

Risch put out a statement today applauding the International Atomic Energy Agency (IAEA) for admonishing Iran over its failure to comply with UN inspections. The IAEA rebuke came hours after Iran announced that it has nearly tripled its stockpile of enriched uranium since November, far exceeding the limits laid out under the nuclear deal.

“I urge Iran to fully cooperate with the IAEA, reverse its recent nuclear activities and accept the invitation from the Trump administration to begin talks,” said Risch.

And the top Democrat on the Foreign Relations Committee, Sen. Bob Menendez, D-N.J., announced earlier this week at AIPAC’s annual policy conference that he is working with another Republican Iran hawk, Sen. Lindsey Graham, R-S.C., to formulate a “concrete diplomatic strategy.” Menendez noted that he and Graham “have been talking with our European partners about multilateral strategy to get Iran back to the table” on nuclear weapons, ballistic missiles, and terrorism.

“We must be willing to use the right economic and diplomatic levers to engage Iran in a serious dialogue about its nuclear weapons program, including its ballistic missiles,” Menendez told AIPAC.

by Murielle KASPRZAK and Joseph SCHMID | AFP | May 26, 2022
END_OF_DOCUMENT_TOKEN_TO_BE_REPLACED