After clashing repeatedly with AIPAC, Rep. Ilhan Omar has signed onto one of their key lobby agenda items for this year. 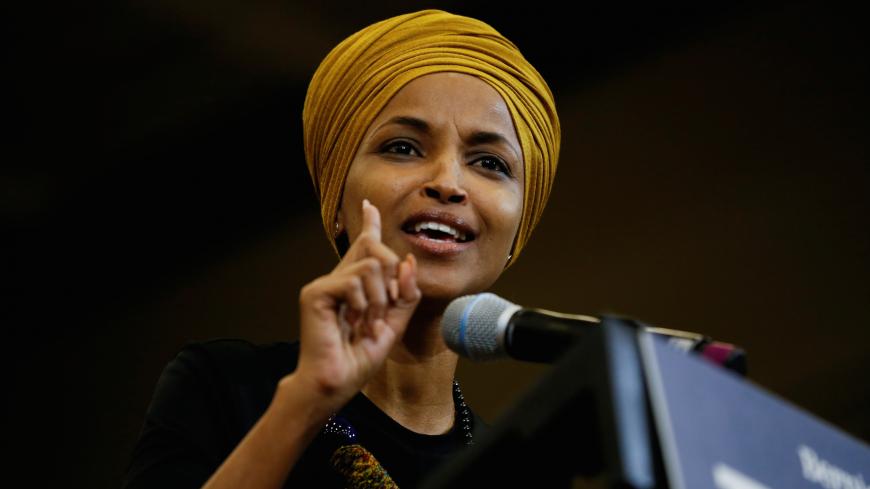 It’s no secret that Rep. Ilhan Omar, D-Minn., has had an acrimonious relationship with the American Israel Public Affairs Committee (AIPAC). The freshman lawmaker has quickly become a lightning rod of criticism for AIPAC and its supporters, who have gone so far as to accuse Omar of using anti-Semitic tropes to describe the group’s lobbying activities.

That hasn’t stopped her from signing onto a key AIPAC lobby item for this year. Omar’s signature in particular stands out among the 391 House members who have jumped onboard an AIPAC-backed letter bolstering the Donald Trump administration’s efforts to extend the United Nations arms embargo on Iran, which expires in October as the first sunset provision under the nuclear deal.

Pompeo doesn’t exactly need any convincing. He noted last week that the Trump administration is “evaluating every possibility” with regard to forcing the UN Security Council to extend the conventional arms embargo. That includes threatening to use a mechanism from the nuclear deal at the United Nations to force multilateral snapback sanctions on Iran, which could be the accord’s final death knell.

Despite Trump’s stated withdrawal from the deal, Pompeo raised eyebrows last week by arguing that a 2015 UN resolution defined the United States as a participant in the accord, thereby allowing it to trigger the snapback sanctions. Pompeo later doubled down on the argument in a rancorous Twitter spat with Sen. Elizabeth Warren, D-Mass.

Iran has said that Russia and China are interested in selling it combat aircraft once the embargo expires, and Moscow and Beijing are likely to veto any extension. As such, proponents of the nuclear deal accuse Pompeo of using the issue as a ploy to instate snapback sanctions, thereby making it harder to revive the accord should Trump lose in November.

While the AIPAC letter has some support from some other progressive lawmakers, many other prominent left-wing members have not signed on, including the rest of Omar’s self-styled “squad” — Reps. Alexandria Ocasio-Cortez of New York, Rashida Tlaib of Michigan and Ayanna Pressley of Massachusetts.

“Congresswoman Omar has consistently, for a long time, supported arms embargos against human rights abusers,” her office told Al-Monitor. “However, that is not to say that she supports Pompeo’s tactics or that her position on sanctions has changed, or that she is not in support of the [nuclear deal]. It was just a narrow ask that we couldn’t find anything wrong with.”

Omar, who sits on the Foreign Affairs Committee, has introduced legislation that would place arms embargoes on human rights abusers, including Iran. Engel, who unlike Omar boasts warm ties with AIPAC, also warned the Trump administration against Iran snapback sanctions upon sending the letter today.

“The UN arms embargo will be the first provision of the Iran nuclear deal to expire,” Engel said in a statement. “This letter, supported overwhelmingly by both parties in the House, represents an imperative to reauthorize this provision — not through snapback or going [at] it alone, but through a careful diplomatic campaign.”

A House Democratic aide told Al-Monitor that “snapback itself right now is the end of the deal. And a lot of members of Congress don’t think that’s the way to do this.”

“We have had long discussions with the administration about what we expect as part of a larger deal, and if this can be the beginning of a larger deal, then it’s something members of Congress can support,” said the aide.

The Joe Biden presidential campaign has been blunter. The Democrat's chief foreign policy adviser, who helped negotiate the Iran deal, slammed the “sheer hypocrisy” of threatening to use snapback sanctions to secure an arms embargo extension last week. Instead of negotiating a new deal, Biden has vowed to lift US sanctions and return to compliance with the accord if Iran does. (Iran has tripled its stockpile of low enriched uranium beyond the limits laid out in the accord since Trump’s exit from the deal.)

AIPAC is also pushing a nonbinding resolution introduced by Sen. Pat Toomey, R-Pa., which calls for an extension of the arms embargo and travel restrictions. That bill has 21 co-sponsors to date.