Rep. Ilhan Omar plans to introduce a pro-BDS resolution days after President Donald Trump invoked Israel to defend his racist tweets that put her in the national spotlight. 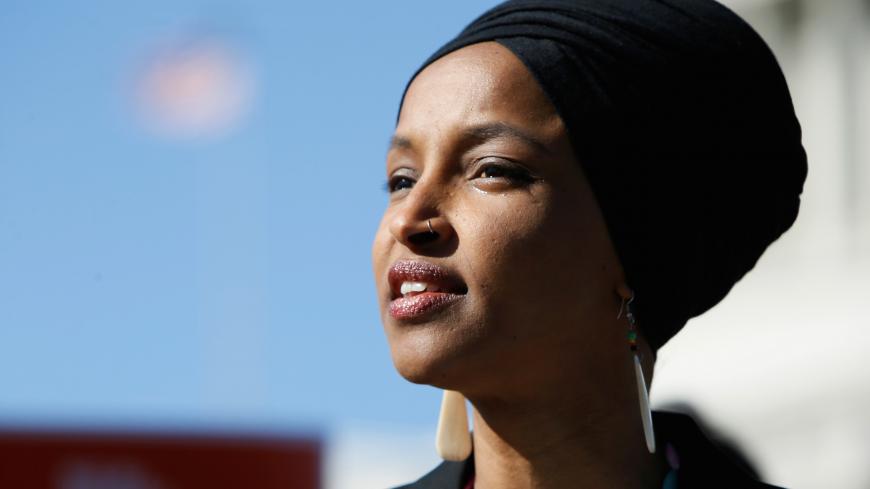 Rep. Ilhan Omar (D-MN) speaks about Trump administration policies toward Muslim immigrants and her own immigrant background at a news conference by members of the US Congress "to announce legislation to repeal President Trump’s existing executive order blocking travel from majority Muslim countries," outside the US Capitol in Washington, US, April 10, 2019. - REUTERS/Jim Bourg

But at least one of those congresswomen — Rep. Ilhan Omar of Minnesota — is about to drop her own resolution that may not go over so well with Democratic leadership. Her resolution would defend the pro-Palestinian boycott, divestment and sanctions (BDS) movement against Israel.

“We are introducing a resolution … to really speak about the American values that support and believe in our ability to exercise our first amendment rights in regard to boycotting,” Omar told Al-Monitor. “And it is an opportunity for us to explain why it is we support a nonviolent movement, which is the BDS movement.”

The Minnesota Democrat noted she intends to introduce the bill early this week. At the same time, Democratic leadership plans to advance another nonbinding resolution condemning the BDS movement on Wednesday.

Omar and her colleague — Rep. Rashida Tlaib of Michigan — became the first and only lawmakers to support the BDS movement after winning their elections last year. Republicans have repeatedly seized upon their pro-BDS stance to paint the Democratic Party as anti-Israel — something that was not lost on Donald Trump during his multiple Twitter tirades targeting both congresswomen.

After tweeting that Omar, a Somali American Muslim refugee, and Tlaib, a Palestinian American, should go back to their countries alongside Reps. Alexandria Ocasio-Cortez, D-N.Y., and Ayanna Pressley, D-Mass., Trump invoked Israel to justify his remarks. At multiple points, he insisted that they “hate Israel” and quoted Sen. Lindsey Graham, R-S.C., who said that “they talk about Israel like they’re a bunch of thugs, not victims of the entire region.”

And while Trump’s racist remarks unified Democrats and allowed them to paint over high-profile spats that had emerged between the party’s leadership and the four progressive congresswomen last week, Omar’s resolution could once again put the intra-party divisions on full public display.

House Foreign Affairs Committee Chairman Eliot Engel, D-N.Y., has so far resisted Republican calls to kick Omar off of the panel. But he has previously accused Omar of “invoking a vile, anti-Semitic slur” after she said, “I want to talk about the political influence in this country that says it is OK for people to push for allegiance to a foreign country.” Her remarks prompted the House to pass another nonbinding resolution condemning anti-Semitism and Islamophobia 407-23 in March.

On Wednesday, Engel’s committee will vote on an anti-BDS resolution, introduced by Reps. Bradley Schneider, D-Ill., and Lee Zeldin, R-N.Y. The resolution was a priority for American Israel Public Affairs Committee (AIPAC) activists during their annual lobbying day earlier this year. The committee also plans to vote on a military aid bill that codifies the $38 billion, 10-year memorandum of understanding with Israel into law — another AIPAC priority.

While both bills still have more than enough support to pass, Omar told Al-Monitor that she intends to vote no.

Omar’s lone voice of opposition marks an end to years of bipartisan precedent that allowed similar legislation to sail through both the House and Senate unopposed. Both chambers easily passed a similar military aid bill by voice vote last year but ran out of time to resolve minor differences in the House and Senate versions.

Additionally, last year the House Foreign Affairs panel unanimously passed the Israel Anti-Boycott Act, which would allow the Trump administration to implement anti-BDS regulations for businesses and their employees that could carry criminal penalties of up to 10 years in prison and a $1 million fine.

After the American Civil Liberties Union and several liberal advocacy groups highlighted free speech concerns with the anti-BDS legislation, even Democrats opposed to BDS have become increasingly wary of binding anti-boycott bills. The emerging partisan fissure over BDS and Israel prompted AIPAC to recalibrate this year, diluting its anti-BDS push by instead lobbying for the nonbinding Schneider resolution.

The resolution, which asserts that the BDS undermines a two-state solution and Israel’s right to exist, boasts 339 bipartisan co-sponsors, including a number of progressive lawmakers. By contrast, Omar’s bill is unlikely to receive a committee markup let alone pass. Still, she told Al-Monitor she refuses to yield to pressure from either party when it comes to AIPAC-backed legislation.

“I am very much driven by the moral clarity that I was sent to govern with, and I’m quite confident that it will withstand pressure,” said Omar.

Correction: July 16, 2019. This article has been updated to indicate that part of Trump's tweets on this issue were quoting Sen. Lindsey Graham.