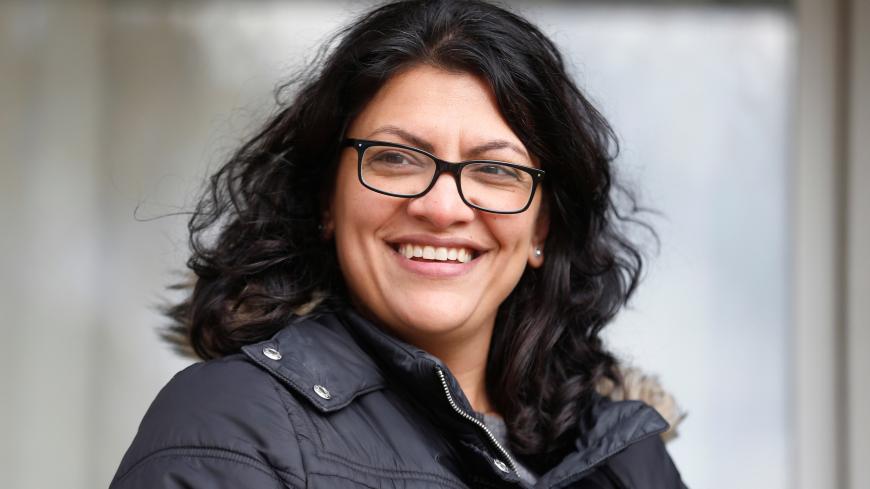 As such, Tlaib wants to take the fight to the pro-Israel lobby by organizing a congressional delegation to the occupied West Bank as an alternative to the decades-long trips to Israel for freshman lawmakers organized by the American Israel Public Affairs Committee (AIPAC).

That’s not going over so well with some leaders in her own party.

“Instead of her talking about things, she’s new here, she ought to listen and learn and open her mind and then come to some conclusions,” Engel told Al-Monitor. “If you’re going to be close-minded and have your views, no one’s going to change her views. But I would hope that once you’re elected to Congress, you would at least care to see the other side of the coin.”

“Instead of her talking about things ... she ought to listen and learn and open her mind and then come to some conclusions,” Engel told Al-Monitor.

In order to organize an official congressional delegation, a lawmaker must get approval from the House speaker or the leader of a committee they sit on. Tlaib is not on Engel's committee, but his opinion on foreign affairs carries weight with other committee leaders.

Tlaib's pro-Palestinian advocacy has notably led her to endorse the pro-Palestinian boycott, divestment and sanctions (BDS) movement. The only other member of Congress to support BDS, Rep. Ilhan Omar, D-Minn., does sit on Engel's committee but so far has not brought up West Bank travel.

Tlaib also indicated that she may instead partner with outside advocacy groups to fund the trips in an interview with the Intercept last month. When Al-Monitor asked Tlaib for updates on her efforts to organize the delegation, she declined to comment.

“This is not partisan,” Babin told Al-Monitor. “My concern is the relationship between the United States and Israel. And when you have a [congressional delegation] specifically to one of the bigger threats to Israel, then I think that could pose some threat and risk as far as the American-Israeli relationship.”

The Texas Republican also argued that Tlaib’s use of a slur word while calling for President Donald Trump’s impeachment makes her unsuitable to liaise with foreign dignitaries.

“I want to see something that shows a little bit more discretion and a little better judgment there than what we’re seeing,” said Babin.

Babin noted that the bipartisan AIPAC trips, which he participated in four years ago, include visits to the West Bank and meetings with the Palestinian Authority.

The pro-Israel lobbying juggernaut spent $2 million to send lawmakers and staff to Israel at the start of the last Congress in 2017 through its sister organization, the American Israel Education Foundation (AIEF). The trips usually take place during the August recess.

But AIEF only spent $440,000 on trips for 40 lawmakers and staffers last year, according to LegiStorm. While AIEF typically cuts down on trips during election years, that’s still less than half of the $963,000 it spent in 2016 and a third of the $1.3 million it spent in 2014. The reason for the reduced expenditures remains unclear. AIEF did not reply to a request for comment.

That’s still far more than the $113,000 that AIPAC’s chief rival, the liberal lobbying group J Street, spent sending lawmakers to Israel and the West Bank in 2017. J Street endorsed Tlaib during her primary campaign last year, but rescinded its endorsement after she called for a one-state solution to the Israeli-Palestinian conflict.

Other lawmakers have tried to launch trips to Palestine in the past. Last year a group of progressive Democrats — Reps. Mark Pocan, D-Wis., Daniel Kildee, D-Mich., and Hank Johnson, D-Ga. — unsuccessfully tried to arrange a trip to the besieged Gaza Strip. The Israeli Embassy in Washington told Al-Monitor last year that it was willing to facilitate access to Gaza as part of a congressional delegation, but Democrats were in the minority at the time and as such needed Republican sign-off.

A group of lawmakers also visited the Gaza Strip in 2009, including then-Sen. John Kerry, D-Mass., as well as then-Reps. Keith Ellison, D-Minn., and Brian Baird, D-Wash.

The House drama is unfolding as the Senate gears up to pass a bill intended to give cover to state-level anti-BDS laws despite constitutional concerns from the American Civil Liberties Union. The Senate moved ahead on the bill 76-22 in a procedural vote today. Still, anti-BDS legislation remains a controversial issue in the Democratic caucus — even if the vast majority don’t support the boycott movement itself.

A recent University of Maryland poll indicated that 56% of Democrats would favor sanctions or more serious measures against Israel should it continue expanding its West Bank settlements. A group of Democrats has responded to Israel’s eroding support on the left by forming a new advocacy group, the Democratic Majority for Israel, to support lawmakers and presidential candidates who embrace pro-Israel positions in the 2020 elections.

For their part, Republicans have been eager to capitalize on Democrats’ intraparty divisions. In addition to advancing anti-BDS legislation, a handful of House Republicans have introduced a bill accusing Tlaib and Omar of anti-Semitism. The resolution, offered by Rep. Lee Zeldin, R-N.Y., singles out both lawmakers by name for their support of BDS and previous controversial statements.

Zeldin said he introduced the resolution to condemn anti-Semitism after the House passed a resolution 424-1 condemning white supremacy earlier this month following racist remarks from Rep. Steve King, R-Iowa. But unlike Zeldin’s resolution, that bill did not single out King by name. The Daily Caller, a conservative news site, reported this week that Minority Leader Kevin McCarthy, R-Calif., backs the Zeldin bill.

Correction: Jan. 29, 2019. This story has been updated to reflect the fact that Engel himself is not in a position to approve Tlaib's request.