Republican opposition to a resolution endorsing a two-state solution to the Israeli-Palestinian conflict reflects the party’s drift away from a previously bipartisan pillar of US foreign policy. 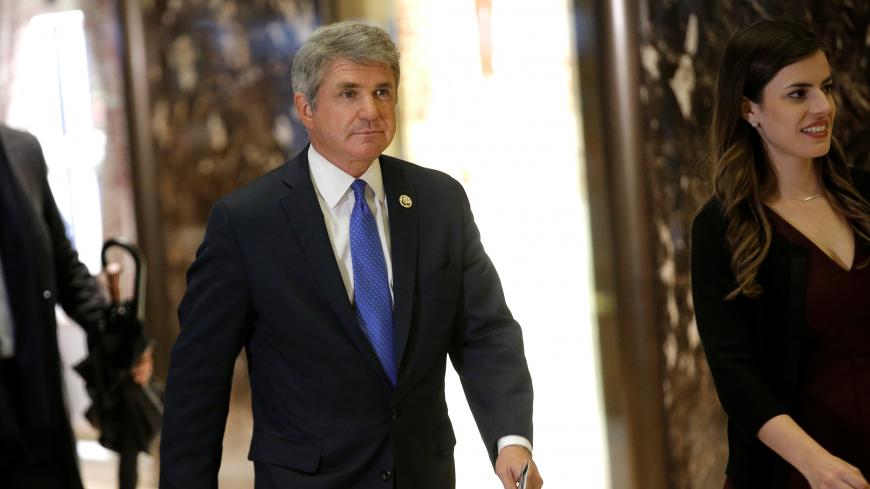 US Rep. Michael McCaul, R-Texas, arrives at Trump Tower to meet with US President-elect Donald Trump in New York, US, Nov. 29, 2016. - REUTERS/Mike Segar

When Rep. Rashida Tlaib, D-Mich., entered Congress this year, she became the first and only lawmaker in decades to explicitly endorse a one-state solution to the Israeli-Palestinian conflict, outlining a vision wherein Palestinians would gain equal rights at the expense of Israel’s Jewish majority.

That skepticism was on full display this week when Democrats on Wednesday advanced a nonbinding resolution, introduced by Rep. Alan Lowenthal, D-Calif., reaffirming congressional support for a two-state solution. Although the Lowenthal resolution boasts 151 co-sponsors, not a single Republican has signed on, and several members of the caucus sharply criticized the legislation before the vote.

“I stand against a two-state solution,” said Rep. Brian Mast, R-Fla., pointing to Hamas’ victory in the 2006 Palestinian elections.

“We are, in the same piece of legislation, talking about supporting the right to self-determination of a group of people that conduct all of these terrorist attacks, creating and acknowledging their government,” said Mast.

Rep. Mike McCaul, R-Texas, the top Republican on the committee, also decried the resolution as “a one-sided take on the Israeli-Palestinian conflict.”

“It goes out of its way to rebuke the current administration’s nascent peace efforts and blames Israel for undermining the peace process,” said McCaul. “It does not mention the Palestinian Authority’s practice of paying individuals who commit acts of terrorism. It adds nothing positive to the conversation.”

Although the resolution doesn’t actually reference any Donald Trump administration policies, it does “discourage steps by either side that would put a peaceful end to the conflict further out of reach, including unilateral annexation of territory or efforts to achieve Palestinian statehood status outside of the framework of negotiations with Israel.”

Prime Minister Benjamin Netanyahu pledged to annex parts of the West Bank during the last round of Israeli elections in April. Furthermore, President Trump’s senior adviser, Jared Kushner, and Secretary of State Mike Pompeo have both refused to endorse a two-state solution.

“Two-state solution is just an empty slogan unless and until there is a Palestinian leadership ready to accept Israel’s right to exist as a Jewish state,” Neil Strauss, the spokesman for the Republican Jewish Coalition, told Al-Monitor. “Right now, the most promising path forward is the administration’s soon-to-be-released plan, and it’s hard to see how this resolution helps that effort.”

Rep. Brad Sherman, a pro-Israel Democrat, suggested that Republicans have backed away from what had previously been a bipartisan pillar of foreign policy across multiple presidencies because Netanyahu himself has not fully embraced a two-state solution.

“I think Republicans will be on board with it when there’s a clear statement from Jerusalem about where Israel stands on a two-state solution,” Sherman told Al-Monitor. “The official policy is for a two-state solution, but I can’t say Netanyahu is an enthusiastic and loud, constant supporter.”

Sherman characterized the resolution as “imperfect” but “good” and signaled support for Democrats’ decision to remove language referring to the Israeli occupation of the West Bank.

An amendment submitted by Rep. Karen Bass, D-Calif., struck Lowenthal’s original language stating that “the United States has long sought a just and stable future for Palestinians and an end to the occupation, including opposing settlement activity.”

Democrats lumped the resolution in with several other pieces of bipartisan pro-Israel legislation during the committee vote, ensuring that Republicans abstained from voting no as the majority of Democrats moved forward with the entire package by voice vote.

Zeldin noted that he “likes a lot of the bill” but opposed the endorsement of the Obama negotiating framework because the former president opted not to issue a veto at the UN Security Council during a 2016 vote on a resolution opposing Israel’s occupation of the West Bank.

Despite the Republican opposition, Democrats managed to advance the resolution along party lines without any actual no votes by bundling it in with legislation pushed by the American Israel Public Affairs Committee (AIPAC).

The AIPAC-backed bills included an Israeli military aid bill codifying the $38 billion, 10-year memorandum of understanding with Israel into law and another nonbinding resolution condemning the pro-Palestinian boycott, divestment and sanctions (BDS) movement.

The only Democrat to oppose the vote was Rep. Ilhan Omar, D-Minn. While the Minnesota Democrat supports a two-state solution and co-sponsored the Lowenthal resolution, she opposed lumping it in with the anti-BDS resolution.

Omar joins Tlaib as the only lawmaker on Capitol Hill to support BDS. As Al-Monitor first reported on Tuesday, she joined Tlaib and Rep. John Lewis, D-Ga., in responding to AIPAC-backed anti-BDS legislation with her own resolution affirming the first amendment right to launch boycotts.

While the resolution does not actually mention Israel, Palestine or BDS, Omar told Al-Monitor that she views the legislation as “an opportunity for us to explain why it is we support a nonviolent movement, which is the BDS movement.”

Less controversially, the vote also included a bill to sanction supporters of Hamas — sponsored by Mast — which could lead to additional sanctions on Iran. The committee also advanced yet another nonbinding resolution praising Arab and Muslim states that improve ties with Israel.