With Democrats controlling the House, AIPAC is diluting its congressional push for anti-boycott legislation. 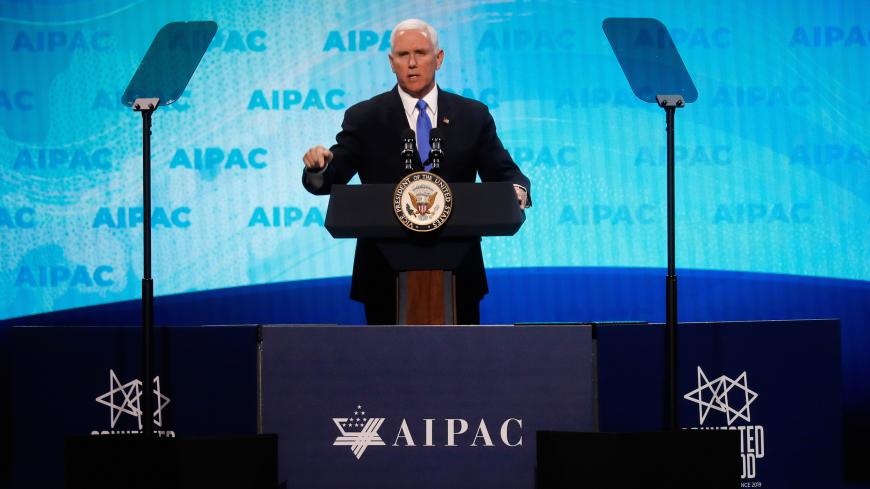 When pro-Israel activists descend on Capitol Hill on Tuesday for their annual lobbying day, they will be significantly scaling back their efforts to tackle the pro-Palestinian boycott, divestment and sanctions (BDS) movement.

Unlike last year, the American Israel Public Affairs Committee’s agenda for the day of cordial meet-and-greets with lawmakers and their staffs does not include the Israel Anti-Boycott Act, legislation to prohibit companies and their employees from providing information to the United Nations that could be used to publicly list businesses operating in the West Bank. Nor does the agenda cover the Combating BDS Act, another top legislative target according to AIPAC’s latest available lobbying disclosures.

Instead, AIPAC is directing its activists to ask Congress for a nonbinding resolution condemning the BDS movement. Reps. Bradley Schneider, D-Ill., and Lee Zeldin, R-N.Y., introduced the bipartisan resolution in the House alongside Sens. Rob Portman, R-Ohio, and Ben Cardin, D-Md., in the upper chamber.

“Congress and successive administrations have sought to deepen bilateral economic ties and protect Israel against pernicious boycott efforts,” AIPAC’s 2019 lobbying agenda states. “Congress must continue to stand by US allies against discriminatory practices that are contrary to US interests.”

The temporary retreat comes as the new Democratic leadership in the House is still figuring out how far to take the anti-BDS fight amid Republican efforts to paint the party as anti-Israel. While only two House freshmen support BDS, the AIPAC-backed anti-BDS bills have exposed a bruising intraparty debate among Democrats with several lawmakers, including high-profile presidential candidates, coming out against the bills on free speech grounds.

“I read this as AIPAC’s effort to support something that can get overwhelming bipartisan support, which is a resolution against BDS but not legislation that will impose penalties on those who support it,” said Michael Koplow, the director of the Washington-based Israel Policy Forum.

AIPAC did not respond to Al-Monitor's request for comment.

The resolution argues that BDS “undermines the possibility for a negotiated solution to the Israeli-Palestinian conflict by demanding concessions of one party alone and encouraging the Palestinians to reject negotiations in favor of international pressure.”

It’s a significantly more modest deliverable than AIPAC’s push for the Israel Anti-Boycott Act during last year’s lobbying day. With 58 co-sponsors, the bill from Cardin likely had enough support to clear the Senate’s 60-vote threshold last year, but it never advanced.

The Senate, however, did pass the Combating BDS Act, introduced by Sen. Marco Rubio, R-Fla., by a 77-23 vote in February. That bill would give legal cover to more than 20 states with anti-BDS laws or executive actions on the books.

The American Civil Liberties has come out against both the Cardin and Rubio bills. Only one Democratic presidential candidate, Sen. Amy Klobuchar, D-Minn., voted for the Combating BDS Act.

Undeterred, AIPAC asked the House to follow the Senate’s lead and pass the bill, which was bundled with a security assistance package for Israel. But House Majority Leader Steny Hoyer, D-Md., came out against the bill.

While activists won’t be pushing the House to pass the bill on Tuesday, AIPAC’s lobbying agenda does direct them to thank senators who voted for the Combating BDS Act.

A third bill, the Anti-Semitism Awareness Act, which Sen. Tim Scott, R-S.C., reintroduced earlier this month, could allow the Donald Trump administration to crack down on academic boycotts of Israel by expanding the Education Department’s definition of anti-Semitism.

Republicans, meanwhile, have sought to highlight two freshman Democratic lawmakers — both Muslim — for their embrace of BDS: Reps. Ilhan Omar of Minnesota and Rashida Tlaib of Michigan. While the resolution being pushed by AIPAC activists mentions neither Omar nor Tlaib by name, it’s a clear rebuke of their views.

Omar in particular has faced charges of anti-Semitism for her comments criticizing AIPAC’s role in advocating for pro-Israel policies. Hoyer took a thinly veiled swipe at both Omar and Tlaib during a speech at AIPAC on Sunday, promising to lead the largest-ever delegation of congressional freshmen to Israel in August despite Tlaib’s efforts to launch a competing trip.