The Senate has passed its first bill clamping down on the pro-Palestinian boycott movement, but House Democrats aren’t committing to a floor vote. 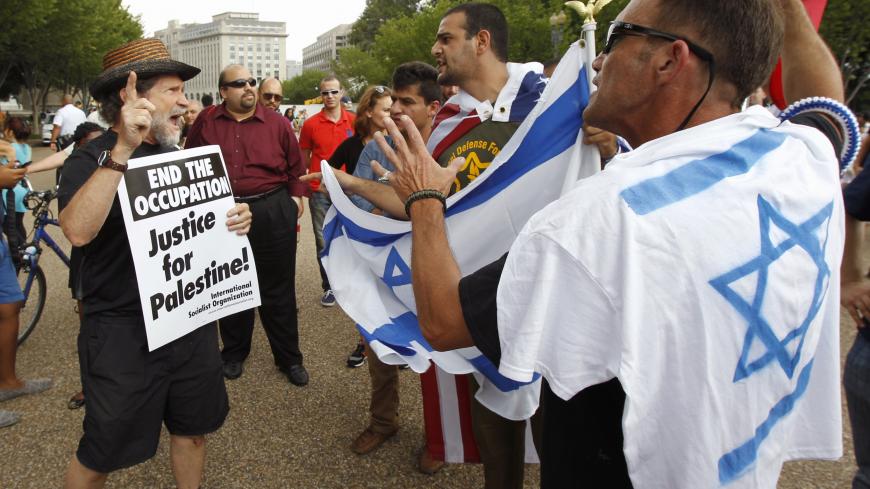 Pro-Palestinian and pro-Israel protesters argue during their rally outside the White House in Washington, Aug. 9, 2014. - REUTERS/Yuri Gripas

The Senate today passed its first bill clamping down on the pro-Palestinian boycott, divestment and sanctions (BDS) movement against Israel by a vote of 77 to 23.

But Democratic leaders aren’t committing to putting the Combating BDS Act, introduced by Sen. Marco Rubio, R-Fla., on the House floor amid a debate over free speech within their caucus.

“The committee would need to look at it, hold hearings on it and mark it up before it’s brought to the floor,” a senior Democratic aide told Al-Monitor.

The American Israel Public Affairs Committee (AIPAC) has lobbied Congress to pass three anti-BDS bills, but the potential snag on the Combating BDS Act could also affect debate on the two others. Notably, the House’s first two pro-BDS lawmakers both sit on committees that have jurisdiction over the issue: Reps. Ilhan Omar, D-Minn., on Foreign Affairs, and Rashida Tlaib, D-Mich., on Financial Services.

“I think there is clearly a question of drawing the line on free speech and the right of anybody to advocate the policy that they want and actions to hurt an ally of the United States and I think that’s an important distinction,” Hoyer said. “I am not sure the Rubio legislation drew that distinction properly.”

The Republican-held Senate prioritized the Combating BDS Act as its first order of business in the new Congress, as part of a broader package of Middle East bills.

Rep. Mike McCaul, R-Texas, has introduced the House version of that package — including the anti-BDS provision — in his capacity as the top Republican on the House Foreign Affairs Committee. But it remains unclear if committee Chairman Eliot Engel, D-N.Y., will take up the legislation given Hoyer’s concerns.

“The problem is the Senate passed … a package of four bills, so it wasn’t discrete,” Hoyer told reporters last week. The anti-BDS bill, he pointed out, “has not been vetted in the House.”

While the legislation has significant bipartisan support, Republicans did not advance the House version of the bill, introduced by Rep. Patrick McHenry, R-N.C., when they controlled the lower chamber last year.

The bill would fall under the jurisdiction of the Financial Services Committee. That could give the pro-BDS freshman Tlaib — the first Palestinian American woman in Congress — a chance to make a case against it.

The bill would give legal cover to state-level anti-BDS laws targeting boycotts of Israel or its West Bank settlements. More than 20 states currently have anti-BDS laws or executive actions on the books, according to an analysis from the Foundation for Middle East Peace, which opposes the legislation. They range from regulations requiring states to divest pension funds from entities boycotting Israel or its settlements, to laws prohibiting public agencies from doing business with pro-BDS advocates — including individual contractors.

The American Civil Liberties Union (ACLU) has challenged many of these laws in court, arguing that they violate constitutionally protected free speech rights. It has also lobbied Congress against the Combating BDS Act, arguing that it encourages states to pass similarly unconstitutional laws.

The ACLU also argues that another anti-BDS bill, the Israel Anti-Boycott Act, introduced by Sen. Ben Cardin, D-Md., is unconstitutional. Hoyer has endorsed that bill despite his skepticism of Rubio’s effort.

“Mr. Cardin has issued a very good rebuttal that speech is not constrained, actions are constrained,” Hoyer told Al-Monitor last month. “[Israel is] an important ally and important to the national security of the United States.”

Cardin’s bill would levy a criminal penalty of up to $1 million on US-based companies and their employees if they provide information to multilateral institutions such as the United Nations that could be used to publicly list businesses operating in the West Bank. Still, Hoyer noted that he hasn’t whipped his caucus to see if the votes are there.

While Cardin’s bill sat dormant in the Senate Banking Committee last year, the House Foreign Affairs Committee unanimously advanced its own version, which would have allowed the Donald Trump administration to write anti-boycott regulations and penalties. But Omar, the other pro-BDS freshman, sits on Foreign Affairs, giving her a prominent perch to muster Democratic opposition to the bill.