Congress seeks to hand off Israel boycott fight to Trump

Congress is taking a third stab at legislation combating boycotts of Israel and its West Bank settlements by passing the buck to the Donald Trump administration. 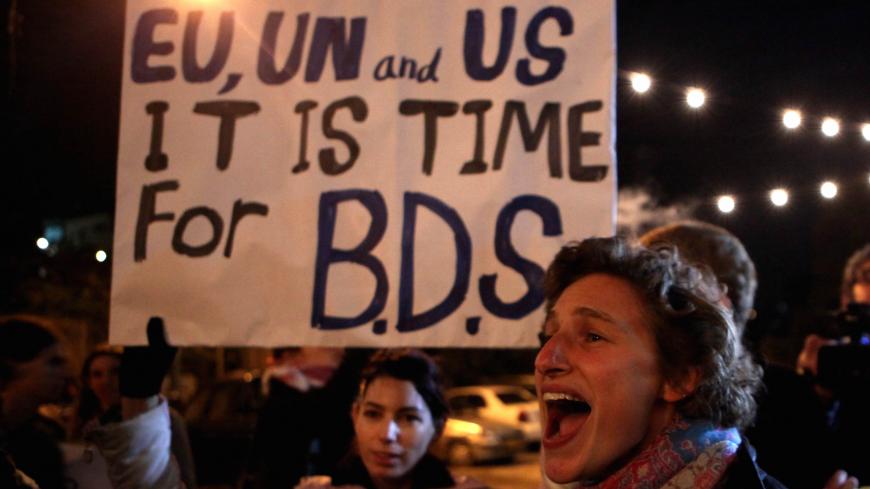 Demonstrators hold a placard urging the international community to take action against Israel's settlement policy in the occupied territories as left-wing Israeli and foreign peace activists join Palestinians in a protest in the Arab East Jerusalem neighborhood of Sheikh Jarrah, Nov. 4, 2009. - GETTY/Gali Tibbon

Faced with months of backlash from civil liberties advocates, Congress is making a third attempt at passing legislation that has stalled for more than a year despite an aggressive push by pro-Israel lobbyists.

The House Foreign Affairs Committee is set to advance the controversial Israel Anti-Boycott Act on Thursday. Like past efforts, the new version seeks to stop US businesses and their employees from complying with United Nations efforts to gather information on companies affiliated with Israeli settlements in the West Bank.

However, the latest version of the bill under consideration makes a major change by directing the Donald Trump administration to implement anti-boycott regulations. That’s doing little to allay concerns of the original bill’s critics.

“It would be bad enough if Congress passed a law to criminalize individuals who participate in boycotts for Palestinian rights,” Josh Ruebner, the policy director at the US Campaign for Palestinian Rights, which supports the boycott, divestment and sanctions (BDS) movement against Israel, told Al-Monitor. “It’s even more concerning that Congress would now consider a version of this bill, which would allow the Trump administration to unilaterally write regulations.”

The original bill, introduced by Rep. Peter Roskam, R-Ill., would have amended the Export Administration Act to bar US citizens from complying with requests from the UN Human Rights Council as it seeks to establish a list of companies involved in West Bank settlement activity. Congress first passed the Export Administration Act in 1979, in response to the Arab League boycott of Israel, to prevent US companies from complying with internationally organized boycotts against friendly countries.

Like the original, the bill’s latest incarnation could still slam violators with heavy financial penalties and jail time. The underlying law that the bill builds upon carries criminal penalties of up to 10 years in prison and up to a $1 million fine. It also provides for a civil fine of up to $250,000.

However, while Roskam’s initial bill applied to “any United States person,” the latest version is more restrictive. Instead, the regulations to be reviewed would more narrowly apply to businesses and their employees.

Roskam’s bill, a priority for the American Israel Public Affairs Committee (AIPAC), has garnered 287 co-sponsors from both parties since its introduction more than a year ago. AIPAC faced a renewed sense of urgency to get lawmakers to pass the bill earlier this year after the UN announced it has found 206 companies enabling or benefiting from Israeli settlements in the West Bank. While the UN has yet to name the companies, a 2016 UN Human Rights Council resolution calls for the establishment of a public database.

Although AIPAC calls the UN database a “blacklist,” the Israel Anti-Boycott Act has faced strong pushback from the American Civil Liberties Union (ACLU), which opposes the legislation on free-speech grounds.

In response, Sen. Ben Cardin, D-Md., sought to draft a compromise earlier this year after gaining 55 bipartisan co-sponsors on an identical bill. The ACLU praised some of Cardin’s changes, such as the removal of jail time, but still threatened to mount legal challenges should it become law.

While Roskam endorsed Cardin’s changes, House Foreign Affairs Committee Chairman Ed Royce, R-Calif., ignored the revisions and instead opted to draft his own version of the legislation for his committee’s consideration Thursday. Neither Royce’s office nor the ACLU responded to Al-Monitor’s request for comment on the bill’s latest iteration.

Ruebner argues that in addition to being an unconstitutional restriction on free speech, the new bill empowering the government to implement anti-boycott regulations is even more concerning given Trump administration officials’ past comments.

In an op-ed published shortly before the 2016 election, Trump’s current envoy for the Israeli-Palestinian conflict, Jason Greenblatt, and his ambassador to Israel, David Friedman, called the BDS movement “inherently anti-Semitic.” They went on to promise “strong measures, both diplomatic and legislative, to thwart actions that are intended to limit commercial relations with Israel or persons or entities doing business in Israeli areas.”

They also vowed that “the Trump administration will ask the Justice Department to investigate coordinated attempts on college campuses to intimidate students who support Israel.” The Intercept news site reported this week that the FBI has questioned BDS advocates on college campuses, allegedly because of unvetted information from the right-wing, pro-Israel website Canary Mission.