A revised anti-boycott bill is gaining traction in the Senate as pro-Israel advocates lobby lawmakers to pass the legislation. 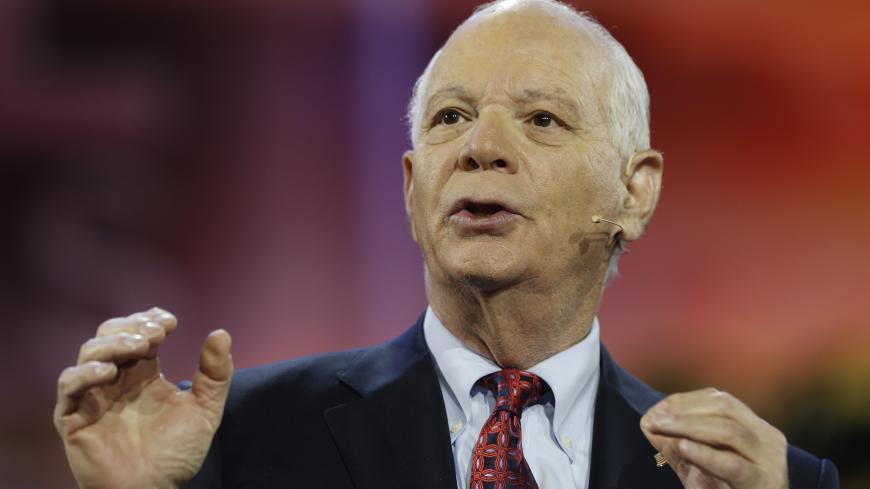 Lawmakers unveiled the latest iteration of a bill meant to crack down on boycotts of Israel and its West Bank settlements just in time for the pro-Israel lobby’s annual advocacy day on Capitol Hill.

Sen. Ben Cardin, D-Md., proposed an amendment to his Israel Anti-Boycott Act on Monday that he hopes will assuage concerns that the legislation violates free speech rights. The American Israel Public Affairs Committee (AIPAC) is championing the bill as part of its annual conference in Washington this week but some critics remain unconvinced by the changes.

Cardin told Al-Monitor that he’d had “several conversations” with the American Civil Liberties Union (ACLU) and taken its “input” after the group opposed his initial bill.  But while the ACLU approved of some of the changes, they still maintain that the latest iteration of the bill is unconstitutional.

“This bill is unconstitutional because it seeks to impose the government’s political views on Americans who choose to express themselves through boycotts,” said Ben Wizner, director of the ACLU Speech, Privacy, and Technology Project. “The proposed changes are improvements, but the revised bill continues to penalize participants in political boycotts in violation of the First Amendment. If it is enacted in this form and takes effect, we will strongly consider fighting it in court.”

The bill seeks to prohibit companies from providing information to multilateral institutions such as the United Nations and the European Union that could be used to publicly list businesses operating in the West Bank. The latest version of the bill would make US-based companies and their employees legally liable if they “comply with, further or support” attempts by foreign countries or “international governmental organizations” to either boycott Israel or “to collect information” that could lead to a boycott.

A press release from Cardin’s office said the Democratic senator and the bill’s lead Republican cosponsor, Sen. Rob Portman of Ohio, made the changes “after months of a healthy dialogue with the public and consultations with outside groups, lawmakers and other legal experts.”

Prior to the latest changes, the bill boasted 51 cosponsors from both parties. Sen. Kirsten Gillibrand, D-N.Y., dropped her support after the ACLU voiced its concerns. Her office did not respond to Al-Monitor’s request for comment on the revised legislation. Meanwhile, the amended bill did gain one new cosponsor this week: Sen. Mike Rounds, R-S.D.

Despite the changes, some critics still maintain that the bill violates constitutional protections on free speech.

“The only concrete thing ‘softened’ by the new text is the removal of jail time for violations,” said Lara Friedman, the president of the Foundation for Middle East Peace, a nonprofit opposed to Israel’s West Bank settlements. The bill, she said, was also tweaked “so that the law does not necessarily apply to individuals if they are acting in an exclusively personal, private capacity.”

Under the initial bill, violators could theoretically have faced up to 20 years in prison. The new version stipulates that only “a monetary penalty” shall apply. However, that still leaves violators open to a civil fine of up to $250,000 and a criminal penalty of up to $1 million.

“The new version includes an expansive definition of ‘boycotting Israel’ that would make it US law to basically treat any distinction between Israel and settlements as an anti-Israel boycott,” Friedman told Al-Monitor.

While the original version of the bill would have applied to “any US person,” Cardin’s updated legislation would apply to any US-based company or its employees acting in an “official capacity” for the company.

AIPAC first began pushing anti-boycott legislation in Congress last year following a 2016 UN Human Rights Council resolution calling for a database of all companies that enable or profit from Israeli settlements in the West Bank. Although it has yet to publicly name any businesses, the UN Office of the High Commissioner for Human Rights announced in January that it had found 206 firms doing business in the West Bank, 22 of which are US companies. The January announcement created a new sense of urgency for the powerful pro-Israel lobby to convince Congress to act.

“Congress must continue to fight the delegitimization of Israel and insist that the United Nations end its anti-Israel bias,” a press backgrounder distributed at AIPAC’s annual conference states. “Congress should pass legislation that prohibits US companies from cooperating with efforts by international governmental organizations — including the UN — to boycott Israel.”