Sen. Ben Cardin, D-Md., wants to attach controversial anti-boycott legislation before the end of the year by attaching it to a must-pass spending bill. 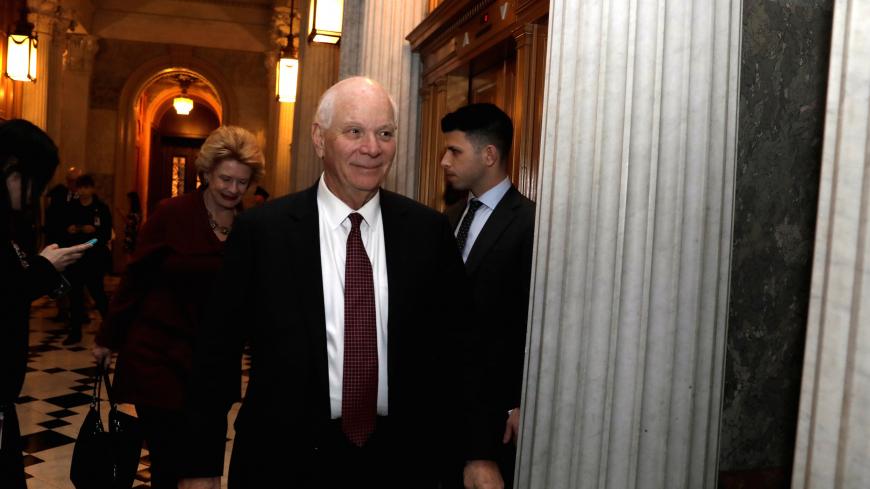 Congress is debating whether to rush through a controversial bill that fines US companies and their employees for participating in internationally organized boycotts of Israel or its West Bank settlements by the end of the year.

But adding it to an unrelated spending bill may be a hard sell, even among supportive Republicans. And many Senate Democrats remain wary of backing the bill due to constitutional concerns raised by civil liberties groups. The American Civil Liberties Union (ACLU) sent a letter to the Senate today asking lawmakers not to include the bill in spending legislation.

“We want to keep as many legislative riders off the appropriations bill, whatever they are, if we can,” Senate Appropriations Committee Chairman Richard Shelby, R-Ala., who co-sponsored the bill, told Al-Monitor. “We’ve been pretty successful thus far, but it’s not over with yet.”

Opponents of the bill argue that tucking the controversial bill in must-pass spending legislation eliminates debate over civil rights concerns while increasing the odds of passage.

“This entire approach of trying to sneak this legislation in a way that avoids debate on a controversial issue so that it can work in silence to silence activists, work to intimidate activists, is really emblematic of the entire Israeli approach to BDS,” said Yousef Munayyer, the policy director at the US Campaign for Palestinian Rights, which supports BDS.

Still, Cardin’s bill now has come within an inch of clearing the Senate’s 60-vote hurdle as a standalone measure on the Senate floor. Sen. Cory Booker, D-N.J., co-sponsored the bill last week, bringing the total number of public supporters to 59.

Booker is the only Democrat rumored to be considering a 2020 presidential run who supports the bill. One of Booker’s potential rivals, Sen. Elizabeth Warren, D-Mass., is on record as opposing it. Another potential rival, Sen. Kirsten Gillibrand, D-N.Y., withdrew her initial co-sponsorship after the ACLU raised concerns that the bill’s penalties run afoul of the Constitution’s free-speech provisions.

In an interview with Jewish Insider last month, Booker argued that “initial concerns that this bill unintentionally infringed on individuals’ First Amendment rights have now been addressed by changes agreed upon earlier this year, and I feel confident that those modifications safeguard Americans’ constitutional right to free speech.”

Booker referred Al-Monitor’s inquiry on the ACLU’s remaining constitutional concerns to his office, which in turn pointed to his statement in Jewish Insider.

Cardin revised the bill earlier this year in a bid to put the ACLU’s concerns to rest. Most significantly, his latest version ensures that violators no longer face prison time.

But the Israel Anti-boycott Act still calls for steep financial penalties on US-based companies and their individual employees if they provide information to multilateral institutions such as the United Nations and the European Union that could be used to publicly list businesses operating in the West Bank. Under the legislation, violators could face a civil fine of up to $250,000 and a criminal penalty of up to $1 million.

The House made its own revision earlier this year, advancing a separate version that leaves it to the staunchly pro-Israel Donald Trump administration to implement the anti-boycott regulations and penalties. The lower chamber has yet to pass the bill.

“Why anyone in their right mind would think that asking this particular administration to act with care when it comes to the constitutional rights of Americans is beyond my comprehension,” said Munayyer. “Doing anything like that would be a tragic mistake and I think we know how the administration would handle it, which is why it should be avoided at all costs.”

The spread of the BDS movement has prompted the pro-Israel lobby AIPAC to lobby lawmakers to pass the bill over concerns that the United Nations could publicly list companies doing business with Israeli settlements in the occupied West Bank.

While the UN has yet to publicly name corporations, it has announced that it had found 206 companies doing business in the West Bank, 22 of which are based in the United States. And just last month, online rental operator Airbnb announced that it is delisting units in West Bank settlements.