How the Engel, Omar primaries became proxy wars over Israel

House Foreign Affairs Chairman Eliot Engel and freshman Ilhan Omar are fending off Democratic primary challengers backed by the pro-Palestinian and pro-Israel wings of the party. 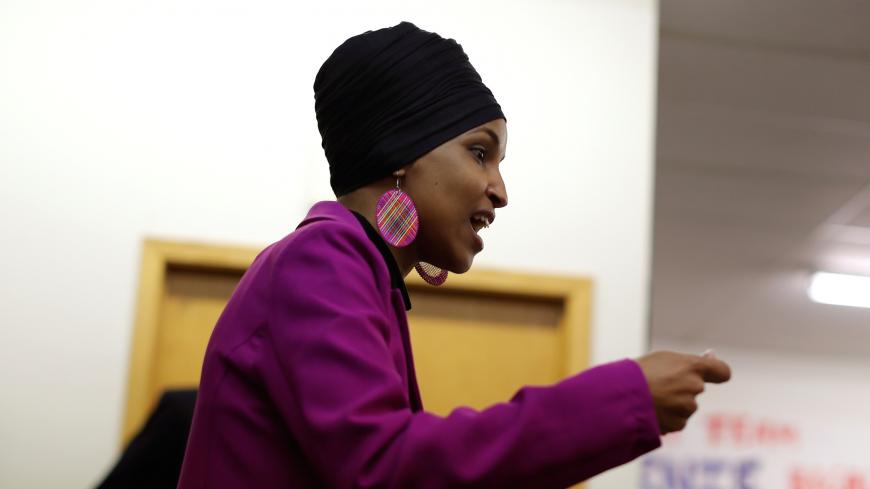 House Foreign Affairs Committee Chairman Eliot Engel, D-N.Y., risks losing his seat in the New York Democratic primary next week after a 31-year tenure in Congress. And while freshman committee member Rep. Ilhan Omar, D-Minn., is expected to win her August primary, she won the endorsement of Minnesota’s Democratic-Farmer Labor Party with only 65% of the delegates. The other 31% of delegates backed her pro-Israel challenger.

The Engel and Omar primaries have become two of the most closely watched races in a series of intraparty proxy wars playing out between the party’s pro-Israel and pro-Palestinian factions in House districts across the country.

Several groups with close ties to the American Israel Public Affairs Committee (AIPAC) have doled out a significant chunk of cash to bolster Engel and other pro-Israel champions. The pro-Palestinian Justice Democrats have in turn formed a super PAC to bolster progressives such as Omar and Engel’s primary challenger, Jamaal Bowman.

While domestic issues such as Engel’s absences from the district during the coronavirus pandemic and the Black Lives Matter protests over George Floyd’s murder have featured most prominently in the race, Bowman and his backers have frequently hammered the chairman’s foreign policy record while expressing sympathy for Palestinians.

“The uprising we’re witnessing across the country against police violence also makes me empathize with the everyday experience and fear that comes with living under occupation,” Bowman wrote Thursday in the Riverdale Press in response to a letter from district resident Rabbi Avi Weiss, who questioned his pro-Israel credentials. “Just as the police force is a violent intimidating force in so many black communities, I can connect to what it feels like for Palestinians to feel the presence of the military in their daily lives in the West Bank.”

Bowman has also hit Engel over his vote for the 2002 Iraq war authorization, his opposition to President Barack Obama’s Iran nuclear deal, his 2016 vote to allow the sale of cluster bombs to Saudi Arabia and the influx of cash he has received from defense contractors.

“I cannot believe that Mr. Bowman says what he says with a straight face,” Engel retorted during a debate last week. “He’s bought and paid for by the Justice Dems. That’s the way it is. And to pretend otherwise, it’s just disingenuous.”

Justice Democrats and the Working Families Party have spent some $750,000 in ads to help Bowman, a former elementary school principal, unseat Engel. The organization supports ending US arms sales to human rights violators, including Israel, Saudi Arabia and Egypt.

Meanwhile, AIPAC-affiliated groups, including NORPAC and the Pro-Israel America PAC, have poured money into the district to bolster Engel. Pro-Israel groups account for nearly $200,000 of the $2 million in funding Engel has raised this election cycle. (Bowman has raised nearly $1 million.)

Many of those same AIPAC-linked groups have also jumped in to fund the campaign of Antone Melton-Meaux, who hopes to unseat the Justice Democrats-backed Omar in Minnesota’s August Democratic party. NORPAC has donated nearly $19,000 to Melton-Meaux, who has also received an endorsement from Pro-Israel America. Still, Melton-Meaux has only raised some $500,000, a small fraction of Omar’s formidable $3.4 million war chest.

AIPAC itself ran social media ads targeting Omar and other pro-Palestinian progressives earlier this year — only to retract them after a backlash among Democrats.

Engel himself accused Omar of using anti-Semitic tropes last year in her criticism of AIPAC’s lobbying activities. Omar apologized for the comments but has continued to criticize AIPAC. But in a surprise move, she did sign onto one the group’s key lobbying items this year: a letter asking the Donald Trump administration to extend the arms embargo on Iran, which expires in October.