The Senate Foreign Relations Committee voted 17-4 for the Taylor Force Act after modifications were made to get Democrats on board. 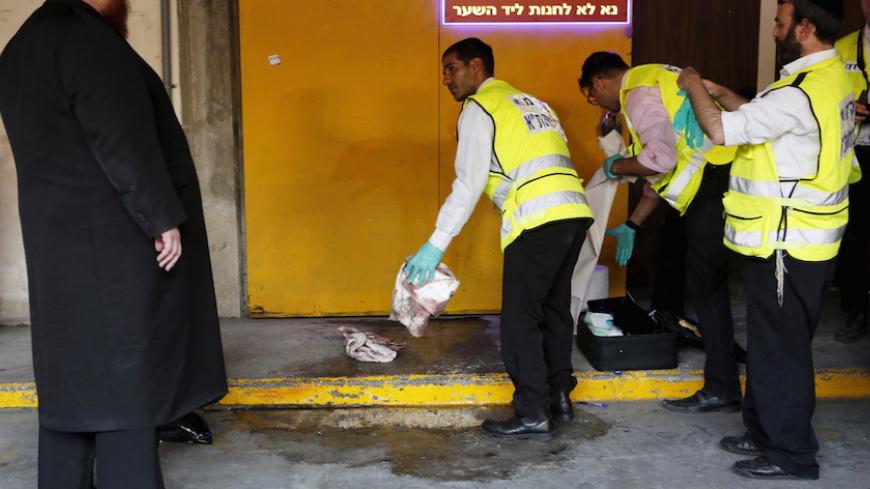 ZAKA emergency personnel clean a bloodstain from the ground at the scene of a Palestinian stabbing attack in Tel Aviv, Israel, Nov. 19, 2015.

A bill that would cut off US economic assistance to the Palestinian Authority (PA) over so-called "martyr payments" is finally gaining traction after initial ambivalence from pro-Israel groups, the Donald Trump administration and congressional Democrats.

The Senate Foreign Relations Committee approved the latest version of the Taylor Force Act today by a vote of 17-4, with four Democrats voting against it. The bill would require the United States to end most nonsecurity assistance to the Palestinians unless the PA stops paying stipends to convicted terrorists and their families, a practice that Israel dubs “pay to slay.”

Before today’s vote, the bill was an exclusively Republican endeavor, but recent modifications have garnered some bipartisan support. Most notably, an amendment offered by Sen. Tim Kaine, D-Va., would create an escrow fund that would temporarily set aside aid withheld to the PA until it stops the controversial payments.

Kaine’s amendment would allow the PA to still receive the assistance if the secretary of state certifies that the “martyr payments” have ceased. Funds would be held for two years, after which they could be used elsewhere if the Palestinian practice continues.

Graham first introduced the bill last year in honor of Taylor Force, a 28-year-old US Army veteran who was stabbed to death March 8, 2016, in Tel Aviv by Bashar Massalha, a young Palestinian killed by police at the scene. The attack took place roughly a mile away from a meeting between former Israeli President Shimon Peres and US Vice President Joe Biden, who was in Israel for an official visit at the time. The Israel Defense Forces retaliated by demolishing Massalha’s family home in the West Bank; the PA has been distributing monthly stipends to the family since.

“The Palestinian Authority pays families like this a lump sum of money in lifetime payments,” Graham said. “So if you’re a young Palestinian, the best thing you can do for your family in terms of income streams is to be a terrorist, and that’s sick. That’s inconsistent with peace.”

Graham added that the United States provides more than $300 million a year in Palestinian aid even as the PA made an estimated $144 million in "martyr payments" last year. The Trump administration has requested $215 million in economic assistance for the West Bank and Gaza in its fiscal year 2018 budget request, all of which would be at risk should the Taylor Force Act pass. Current US law requires a dollar reduction in US assistance for every dollar the PA spends on "martyr" stipends.

Al-Monitor first reported on the lack of overt support for the bill among traditionally pro-Israel parties such as the powerful American Israeli Public Affairs Committee (AIPAC) in July. But the Senate version of the bill has finally earned the endorsement of AIPAC and key congressional Democrats.

“AIPAC applauds the Senate Foreign Relations Committee for adopting the Taylor Force Act … which would eliminate funding that directly benefits the Palestinian Authority … if it continues its abhorrent practice of paying salaries to terrorists or their families,” the lobbying group wrote in a statement today.

Despite AIPAC's newfound support for the Taylor Force Act, it is still unclear if Israel itself supports the bill in its current incarnation. The Israeli Embassy declined to comment on the Senate’s latest version of the bill.

J Street, a liberal lobbying group that supports greater rapprochement with the Palestinians, initially told Al-Monitor it did not support Graham’s original bill. The group put out a statement today reiterating its opposition to the latest version of the bill even as it hailed some improvements to it.

Although J Street was encouraged by provisions that could preserve funding for the projects of the US Agency for International Development at the local level, as well as humanitarian assistance provided by US nongovernmental organizations, it still believes the language is not yet clear enough.

“The bill’s language is vague in places, making it unclear as to whether this assistance would continue depending on how narrowly the language is interpreted by the current US administration or by future administrations,” J Street said in a statement.

J Street in particular objected to the exclusion of an amendment offered by Sen. Tom Udall, D-N.M., which was defeated in a party-line vote. The Udall amendment would have allowed the secretary of state to issue a waiver allowing for the continuation of US assistance for public health and other humanitarian needs.

“Today I offered an amendment to create a simple, humanitarian exception to allow funding for programs that promote public health, prevent the spread of disease and provide assistance for food, water, medicine, health and sanitation needs,” Udall told Al-Monitor.

“I believe such an exception is a no-brainer — it’s the humane thing to do and a reflection of our values as a nation. Unfortunately my amendment was not adopted by the committee, so I voted against the underlying bill.”

“In an effort to try to improve the bill and keep it from undermining American national interests, Israel’s security and the humanitarian situation in the West Bank, Sen. Booker joined a number of colleagues to vote against it and hopes that changes can be made prior to it being voted on the floor of the Senate,” Booker spokeswoman Kristin Lynch told Al-Monitor in a statement.

“This bill is not intended to undermine or stop much-needed humanitarian aid that is delivered through vetted US nongovernmental organizations to Palestinians in need,” said Cardin.

The bill does preserve funding for the Israeli-run East Jerusalem Hospital Network, where the PA typically sends Palestinian patients seeking treatment not available in the West Bank.

At a hearing last month, Acting Assistant Secretary of State for Near Eastern Affairs Stuart Jones expressed reservations about the original version of the bill. The State Department referred all questions about today’s vote to the White House, which did not respond to Al-Monitor’s request for comment.