Lawmakers included the provision in must-pass spending legislation to keep the government open. 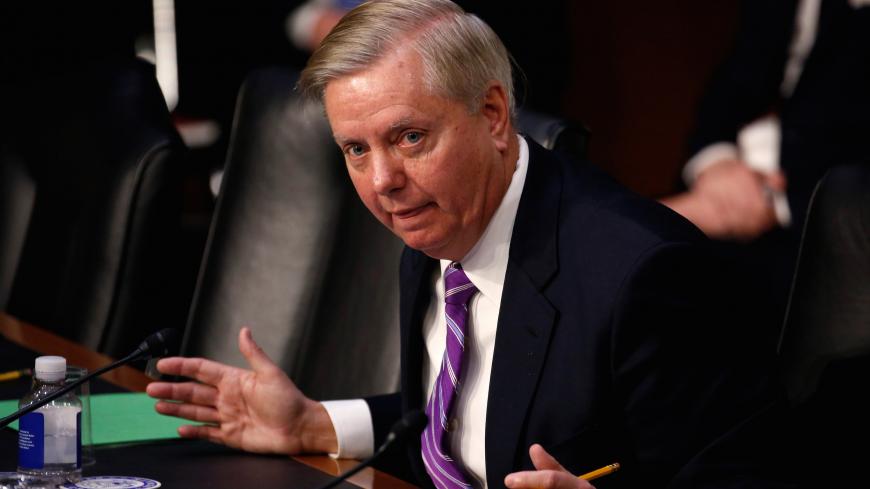 After months of negotiations and multiple revisions, Congress is on the verge of mandating that the Donald Trump administration cut economic assistance to the West Bank and Gaza that “directly benefits” the Palestinian Authority (PA).

The legislation, known as the Taylor Force Act, was incorporated into a government spending bill that Congress must pass by Friday in order to avert a government shutdown. Unless the PA ceases its so-called martyr payments to Palestinian assailants responsible for attacks in Israel and to the assailants’ families, the aid cuts will soon go into effect.

The House passed the $1.3 trillion spending bill 256-167 and the Senate will vote soon. The White House has said that Trump will sign it into law.

“After over two years of very hard work, we are on the verge of having the Taylor Force Act become law,” said Lindsey Graham, R-S.C., the chief architect of the bill in the Senate. “The Palestinian Authority pays monetary rewards to terrorists and their families. These rewards for terrorist attacks are inconsistent with American values. They are inconsistent with decency and they are certainly inconsistent with peace.”

It remains unclear, however, exactly how much of that aid Palestinians stand to lose. Congress has left it to the Trump administration to determine how much aid “directly benefits” the PA.

The State Department plans to spend about $215 million in economic assistance for the West Bank and Gaza this year and has requested another $215 million in its 2019 budget request. Once Trump signs the bill into law, the State Department will have 15 days to report to Congress on what programs will be subject to cuts. The United States does not provide the PA with any direct budgetary support but uses some Palestinian assistance funds to pay off PA debts to Israel, which nonetheless supports the bill.

“Israel applauds Congress for working to pass the Taylor Force Act, which sends a clear message to the Palestinian Authority to stop the abhorrent practice of paying terrorists and their families for the murder of Jews,” Ron Dermer, the Israeli ambassador to the United States, told Al-Monitor in an emailed statement.

Opponents of the bill argue that it is politically untenable for PA President Mahmoud Abbas to end the payments, particularly in light of Trump’s recent recognition of Jerusalem as Israel’s capital as well as his decision to cut $65 million in separate funding for the UN agency for Palestinian refugees.

“Under the current circumstances, it would be politically suicidal for Abbas to be seen as kowtowing to Trump … because he would basically be seen as having rewarded the Americans,” Mouin Rabbani, a senior fellow at the Institute for Palestine Studies, told Al-Monitor. “What I think [the PA] will do is present this, quite rightly, as another attempt at political blackmail.”

Graham named his bill after the son of two of his constituents; the son, Taylor Force, was a US Army veteran stabbed to death by a Palestinian attacker while in Tel Aviv in 2016. Israeli police killed the assailant, Bashar Massalha, at the scene. The PA has distributed monthly stipends to Massalha’s family since the attack while Israel has retaliated for the attack by demolishing his family’s home.

The initial version of the bill would have automatically cut off all economic aid for the West Bank and Gaza. It was a purely partisan push that wasn’t endorsed by either Israel or the influential American Israel Public Affairs Committee (AIPAC).

Republicans eventually managed to bring Democrats on board and earned the endorsement of AIPAC with changes that reduced the scope of the cuts and added exemptions for certain programs. The bill, however, was not on AIPAC’s official agenda during its lobbying day earlier this month despite the thunderous cheers it received from thousands of rank-and-file members when lawmakers repeatedly referenced it in speeches at AIPAC’s annual policy conference.

The bill still contains exemptions for US funding for the East Jerusalem Hospital Network, a chain of health care facilities offering specialty services typically not available elsewhere in the West Bank and Gaza, as well as for child vaccination programs and wastewater treatment projects. Graham and other Republican senators initially objected to the wastewater exemptions and public health exceptions, which were introduced in the House.

The Trump White House was the primary driver in pushing for the wastewater project exemption. Tens of millions of cubic meters of untreated sewage emanating from the West Bank and East Jerusalem have polluted rivers in Israel as well as the Palestinian territories, a point the White House raised once again during last week’s conference on humanitarian aid for Gaza. The Trump administration has also touted water-sharing programs as a way to bring Israelis, Palestinians and Jordanians together ahead of peace talks.

The compromise bill also removes the House’s sunset clause that would have ended the aid cuts after 2023. Additionally, it builds upon an escrow fund that sets aside withheld aid for two years. If the PA does not stop its martyr stipends, the final language allows the State Department to reprogram half of the withheld assistance to assistance programs that do not directly benefit the PA while the other half must be used outside of the West Bank and Gaza.

Current US law already requires a dollar-for-dollar reduction in Palestinian assistance for every dollar the PA sends to Palestinian attackers or their families. The cuts from the Taylor Force Act would count toward that deduction. The State Department has not publicly divulged how much funding it currently withholds. For its part, the PA says it spends about $350 million per year on its martyrs fund, which also includes payments to Palestinian prisoners who have not attacked civilians or Israeli forces.