Original supporters of the Taylor Force Act say pushback from Democrats and the Trump administration has watered down their legislation. 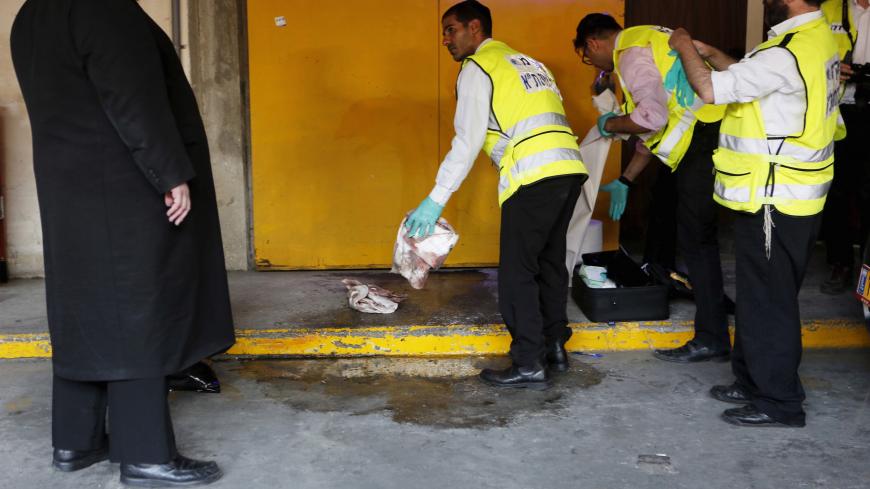 Zaka emergency personnel clean a bloodstain from the ground at the scene of a Palestinian stabbing attack in Tel Aviv, Israel, Nov. 19, 2015. - REUTERS/Nir Elias

Picking up where the Senate left off, the House today continued to dilute the impact of a bill intended to cut off US economic aid for the West Bank and Gaza in retaliation for the Palestinian Authority’s (PA) payments to convicted terrorists and their families.

The House Foreign Affairs Committee advanced the newest version of the Taylor Force Act by voice vote in a sign that Democrats are on board with the latest revisions. The initial version of the bill, introduced by Sen. Lindsey Graham, R-S.C., and Rep. Doug Lamborn, R-Colo., generated significant Democratic opposition as it would have completely cut off US economic assistance to the West Bank unless the PA ended its so-called martyrs' fund.

Graham got Senate Democrats on board by limiting the aid cuts to funding that the United States determines “directly benefits” the PA and putting withheld funds in an escrow account for two years. Now he tells Al-Monitor that he’s “concerned” with some of the latest revisions in the House, which go even further.

Current US law already requires a dollar reduction in US economic assistance to the West Bank for every dollar the PA spends on the martyrs' fund. Furthermore, although the bill would cut funding that “directly benefits” the PA, the United States does not currently provide direct budgetary support to the PA itself; instead, much of the US economic assistance is used to pay off PA debts to Israel.

The latest revisions in both the Senate and the House have garnered Democratic support in what was originally a strictly partisan endeavor.

“The wholesale defunding of the [PA] is a misguided approach to address problems with Palestinian governance that undermine an ultimate resolution to the Israeli-Palestinian conflict,” Rep. Gerry Connolly, D-Va., said in a statement before today’s vote. “This bill limits assistance to the West Bank and Gaza to programs that do not directly benefit the PA and includes exceptions for payments to the East Jerusalem Hospital Network and assistance for wastewater treatment projects.”

Connolly sits on the House Foreign Affairs Committee and successfully added an amendment to include an exemption to funding cuts for child vaccination programs.

The Senate version of the bill already included the exemption for the East Jerusalem Hospital Network, which provides specialty health care unavailable to Palestinians elsewhere in the West Bank and Gaza Strip. Furthermore, the House bill ensures that the aid cuts won’t extend past 2023.

While the Donald Trump administration declared its support for the Senate version of the bill in September, Jewish Insider reported this week that Jason Greenblatt, Trump’s envoy for the Israeli-Palestinian peace process, lobbied the House to include the wastewater project and public health exemptions. The Trump administration regards its success with water-sharing programs between the PA and Israel as helpful for restarting the peace process.

Graham named his bill after the dead son of two of his constituents. Taylor Force was a US Army veteran who was killed by a Palestinian assailant last year. According to Graham, the PA paid $144 million in stipends last year to Palestinians convicted of terrorism by Israel.

In his capacity as chairman of the Senate panel overseeing foreign aid appropriations, Graham tucked the revised Senate version of the bill in must-pass spending legislation in September.

While House Republicans agreed to vote the Taylor Force Act out of the Foreign Affairs Committee, paving the way for a full vote on the House floor, many of them voiced their displeasure with the new exemptions. As recently as Tuesday, 152 House Republicans had signed on to co-sponsor the original Lamborn bill, which contained neither the Senate nor the House exemptions.

“The Taylor Force Act, while I believe that we should not allow for exceptions and carve-outs in this legislation, should be supported,” Rep. Ileana Ros-Lehtinen, R-Fla., the chairwoman of the Foreign Affairs Committee panel overseeing the Middle East, said ahead of today’s vote. “Because that flexibility will be used once again to circumvent the spirit of the law and congressional intent.”

"We should not allow for exceptions and carve-outs in this legislation ... because that flexibility will be used once again to circumvent the spirit of the law and congressional intent."

Indeed, the exact amount of economic assistance cuts that Palestinians stand to lose remains unclear, as the criteria for determining what aid “directly benefits” the PA is unspecified. As such, the administration will have considerable discretion in determining the extent of the cuts. The House version of the bill requires the Secretary of State to notify Congress of the criteria used to determine which aid “directly benefits” the PA within 15 days after the bill becomes law.

“We’ve been engaging with all the relevant parties [on] that number, and no one is fully aware of how much this will affect us,” Husam Zomlot, the Palestine Liberation Organization’s envoy to Washington, told Al-Monitor in October. “But we realize, given the wording of the law, that it could affect most of it or it could affect very little. The wording is very general.” The PLO has been lobbying Congress against the bill for the past several months.

The US Agency for International Development (USAID) spent roughly $260 million in economic aid for Palestinians in fiscal year 2017, and the State Department is seeking $215 million in funding for economic assistance to the West Bank and Gaza for the current fiscal year.

The potential cuts come at an especially inconvenient time for the PA, as it endeavors to form a unity government with Hamas in the Gaza Strip by December. Additionally, the House Foreign Affairs Committee also moved legislation today to tighten the screws on Hamas.

Rep. Brian Mast, R-Fla., spearheaded a bill that would sanction countries for “direct or indirect support” for Hamas or Islamic Jihad, a Gaza-based Islamist group, by suspending US assistance and loans as well as US munitions exports. In addition to Iran, the bill singles out Qatar and accuses it of “openly [financing] Hamas.”

“When the bill was introduced [in May], Qatar was hosting senior Hamas terrorist Saleh al-Arouri,” House Foreign Affairs Committee Chairman Ed Royce, R-Calif., said before today’s vote. “Two weeks after this legislation was introduced, he, along with other Hamas terrorists, was expelled from Qatar.”

An October report from the Congressional Research Service notes that “Qatari officials say that [hosting Hamas officials] has had the tacit blessing of US officials who see the benefit in being able to engage Hamas.”

Lastly, the committee advanced a bill introduced by Rep. Joe Wilson, R-S.C., which would sanction members of Hamas involved in using civilians as human shields. However, Hamas is already subject to US sanctions as a result of its designation as a terrorist group.