US lawmakers' efforts to further condition assistance to the Palestinian Authority is complicated by Israel's reluctance to undermine a key security partner. 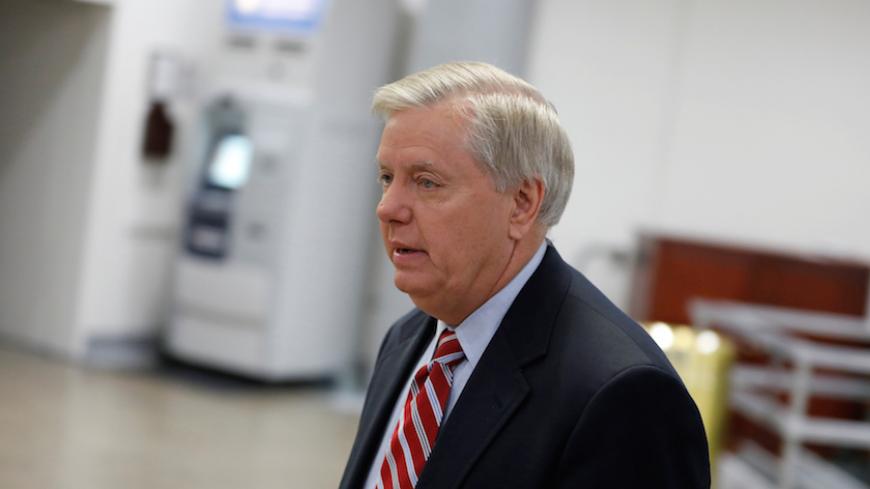 Senator Lindsey Graham (R-S.C.) arrives for a classified briefing on the airstrikes launched against the Syrian military, at the US Capitol in Washington, April 7, 2017. - REUTERS/Aaron P. Bernstein

WASHINGTON — A Republican effort to prohibit US aid to the Palestinians until they stop payments to the families of those imprisoned or killed for attacking Israelis is running into opposition from a surprising source: Israel.

Publicly, the Benjamin Netanyahu government supports any effort to stop what it dubs the Palestinian Authority's (PA's) practice of "pay to slay." Privately, however, a number of Israeli officials and pro-Israel advocates fret that a blanket ban on US assistance would undermine Israel's flawed but crucial security partnership with the PA.

Testifying Wednesday at a Senate Foreign Relations hearing about the pending Taylor Force Act, former US Ambassador to Israel Daniel Shapiro said he supported the bill in principle but warned that cutting all economic support to the PA could have a destabilizing effect on Israel. He urged lawmakers to give the Donald Trump administration the flexibility to target cuts as it sees fit.

“I base my judgment that the assistance is valuable in the analysis that’s conveyed to me by the Israeli military leaders I’ve worked with who saw that assistance as having a significant stabilizing impact, which is very much in Israeli security interests,” Shapiro told Al-Monitor.

The very next day, Acting Assistant Secretary of State for Near Eastern Affairs Stuart Jones told a House Foreign Affairs panel that the Donald Trump administration also has reservations. The State Department is seeking $215 million in economic assistance for the West Bank and Gaza in its Fiscal Year 2018 Budget request, all of which would be at risk if the bill passes.

“It is not clear that the Taylor Force Act, as currently drafted, would help accomplish the objectives that are needed,” Jones said. He noted that President Trump had directly raised the issue with Palestinian President Mahmoud Abbas, and that the PA had made some progress on the issue.

“For the first time in 52 years of the Palestinians’ prisoner payment program, the Palestinian Authority cut funding to 277 Hamas-affiliated former prisoners,” Jones pointed out.

Compounding the complexity of the situation, about $50 million in US assistance to the Palestinians does not flow directly to the PA but instead to Israel, which uses the money in part to pay off Palestinian debts to Israeli service providers such as electricity companies. And Israel is wary of compounding hardships for West Bank Palestinians at a time when Abbas is cutting off aid to his Hamas rivals in Gaza, further stoking unrest in the volatile strip.

The Israeli Embassy in Washington has stopped short of endorsing the bill. An Israeli official told Al-Monitor that “Israel welcomes any effort to prevent the Palestinians from engaging in 'pay to slay' and has confidence that the Congress will address this matter in a forthright and direct manner.”

The powerful American Israel Public Affairs Committee (AIPAC) has also been conspicuously silent about the bill and did not respond to multiple requests for comment from Al-Monitor. AIPAC's last publicly available lobbying disclosure form, filed more than a month after Sen. Lindsey Graham, R-S.C., introduced his bill, indicated the group was not lobbying on the issue as of late March.

J Street, a liberal group that seeks greater rapprochement with the Palestinians, warned the cuts could fuel sympathy for Hamas and other anti-Israel groups.

“A reduction in humanitarian aid and basic government services … would only increase deprivation and despair among the most vulnerable in Palestinian society, fermenting further extremism,” J Street’s chief lobbyist, Dylan Williams, told Al-Monitor. “We therefore support current US law, which requires a one-to-one reduction in US assistance for every dollar paid by the PA to those who committed acts of terrorism.”

Current law indeed already requires the United States to cut Palestinian aid in parallel with the so-called martyr fund payments, but Republican critics say it doesn't go far enough. The PA is estimated to allocate more than $300 million to the fund every year.

As a result, Graham first introduced his legislation last year and has made steady progress since, culminating with this week's Senate Foreign Relations Committee hearing. The bill is named after Taylor Force, a 28-year-old US Army veteran who died during a stabbing attack in Tel Aviv last year.

The attack took place roughly a mile away from a meeting between former Israeli President Shimon Peres and former Vice President Joe Biden, who was in Israel for an official visit at the time. Police killed the attacker, Bashar Massalha, at the scene. The Israel Defense Forces retaliated by demolishing Massalha’s family home in the West Bank, while the PA has been distributing monthly stipends to them since.

Graham's effort remains an entirely Republican effort. Likewise, the House version from Reps. Doug Lamborn, R-Colo., and Lee Zeldin, R-N.Y., has yet to attract any Democrats.

Efforts are being made, however, to alleviate some of the concerns with the bill and attract bipartisan support. Shapiro, for example, suggested a series of six options to narrow the scope of the bill, including limiting the cuts only to funds that more directly target the PA, such as electricity payments, and redirecting funds to other activities, such as programs promoting people-to-people ties or the West Bank's technology sector. He also recommended setting the annual PA assistance fund aside in an account until the PA changes its stipend laws and including a set date for the cuts to take effect.

The Israelis, Shapiro told Al-Monitor, "seem very much to support the goals of the legislation. They seem not to want to be too proscriptive about exactly what form it takes, recognizing that it may go through some amendments from the original version.”

“To my knowledge in speaking directly with the ambassador," Corker said, Israel supports adding to the pressure on the PA. But the chairman also indicated an openness to making changes to the bill in order to win Democratic support.

“We have some additional conversations to take place with Sen. Graham," Corker said, "but I think we’re getting to a place where we’re going to have a very effective piece of legislation working with [ranking member Ben] Cardin to get to that place.”

However, Corker also suggested that Israel itself should do more to cut off their own funding to the PA over the so-called martyr stipends. He indicated his support for a pending Israeli bill that would do just that, even though the bill’s future in the Knesset is uncertain.

“They’re cheering us on and they’re going to pass the bill and I’m all for it,” said Corker. “They should be doing more themselves.”

Congressional Democrats have also indicated that they’re open to passing a revised version of the Taylor Force Act.

“Prior to today’s hearing, there’s been lots of conversation about how we can make this legislation more effective in reaching our objective of putting maximum pressure on the Palestinian Authority to change its policy,” Cardin said. He said a modified version of the bill “can enjoy broad, bipartisan consensus support" in the Senate, "and I think we’re very close to achieving that.”

“There is momentum in Congress and in the administration,” said Deutch. “The witnesses at yesterday’s hearing have offered a number of suggestions of revision to the legislation that would ensure that we maintain Israel’s security, such as withholding PA debt payments, and setting aside the money as an incentive to retrieve it once changes to the practice are made.”