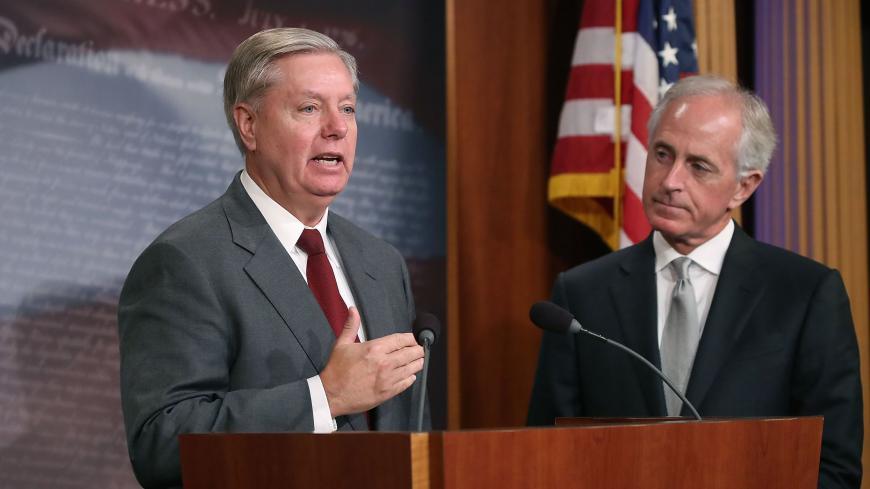 WASHINGTON — Congress has moved one step closer to cutting off economic assistance that directly benefits the Palestinian Authority (PA).

The powerful Senate Appropriations Committee voted overwhelmingly today in favor of a foreign aid bill that withholds certain economic assistance unless the PA stops paying stipends to the families of Palestinians imprisoned for terrorism or killed while attacking Israelis. The inclusion of the provision, named after slain US Army veteran Taylor Force, greatly increases the odds that it will become law.

“Taylor Force was an American hero who was brutally murdered at the hands of terrorists,” Sen. Lindsey Graham, R-S.C., said before today’s vote. “Yet instead of condemning this horrific attack — and so many others like it — the Palestinian Authority rewards terrorists. Today we are sending a strong message to the Palestinian Authority that this practice is wholly unacceptable and inconsistent with peace.”

Graham, the chairman of the committee’s panel that oversees foreign assistance, first introduced the Taylor Force Act last year. Companion legislation in the House from Rep. Doug Lamborn, R-Colo., has attracted 111 co-sponsors, all of them Republicans.

Last month, the Senate Foreign Relations Committee voted 17-4 in favor of an amended version of the original bill that would create an escrow fund to temporarily set aside aid withheld to the PA until it stops its so-called martyr payments. Under the version of the legislation that passed today, the Treasury Department must set aside the withheld funds to the PA for one year, giving the Palestinians a window to change their practices before assistance is redistributed to other countries.

Ahead of today's vote, Graham further revised his bill by specifying that only funds "that directly benefit the Palestinian Authority" should be withheld. The changes would preserve US funding for NGOs and other independent organizations operating in the West Bank and Gaza.

According to Graham, the PA spent an estimated $144 million on “martyr payments” last year. The State Department has requested $215 million in economic aid to the West Bank and Gaza for 2018, some of which would likely be cut should the Taylor Force Act become law. Current US law only requires a dollar reduction in US assistance for every dollar the PA spends on "martyr" stipends.

Although four Democrats on the Foreign Relations Committee voted against the bill in August on the grounds that it did not contain enough amendments to provide humanitarian exceptions, Senate Minority Leader Chuck Schumer, D-N.Y., immediately became a co-sponsor of the bill the next day. Schumer’s endorsement and support from other Democrats indicate that the bill, initially a solely Republican endeavor, is quickly gaining bipartisan traction.

Still, Graham's latest revisions still failed to convince at least one of the bill's earlier opponents on the Senate Foreign Relations Committee.

“While this version of the amendment represents a modest but important improvement to protect humanitarian aid in this very volatile region, I remain concerned that it still risks undermining regional stability -- and therefore our own national security -- at a time when we are already involved in a number of difficult conflicts around the world,” Sen. Tom Udall, D-N.M., told Al-Monitor in a written statement following the vote.

Pro-Israel lobby groups, however, have started turning up the heat on Democratic holdouts.

Other pro-Israel lobbying groups have also weighed in.

“Today’s action signals just how serious our legislators are about ending US aid for Palestinian terrorism,” Nathan Diament, the executive director for public policy at the Orthodox Union Advocacy Center, the lobbying arm of a coalition representing American Orthodox Jews, said in a statement. “We applaud the Senate Appropriations subcommittee — and its chairman Sen. Graham — for placing so much attention on the need to stop using American taxpayer dollars to fund terrorism.”

And Daniel Shapiro, a US ambassador to Israel under President Barack Obama, now supports the updated version of the bill after initially voicing his reservations about its original version in July.

"With the amendments from the Foreign Relations and Appropriations Committees, the bill now provides strong opposition to the PA's payments to terrorists and leverage to pressure the PA to stop them, while preserving the ability to provide assistance that supports other US and Israeli interests and helps innocent Palestinians,” Shapiro told Al-Monitor. “It is a good bill, with strong bipartisan support, and a fitting tribute to Taylor Force."

However, J Street, a liberal Jewish lobbying group, opposed the legislation that emerged from the Senate Foreign Relations Committee last month. It's unclear what the group's stance is on the latest revisions.

“The bill’s language is vague in places, making it unclear as to whether this assistance would continue depending on how narrowly the language is interpreted by the current US administration or by future administrations,” J Street said in an August statement.

The Trump administration’s stance also remains unclear. Past administrations have balked at cuts to the PA because of worries they could destabilize a key Israeli security partner against Hamas and other Islamist groups. Stuart Jones, acting assistant secretary of state for Near Eastern affairs, testified in July that it was not clear that the bill “as currently drafted, would help accomplish the objectives that are needed.” The State Department did not respond to Al-Monitor’s repeated requests for updated comment.

Correction: Sept. 8, 2017. An earlier version of this article mistated the scope of the proposed cuts to Palestinian aid. The bill that cleared the Senate Appropriations Committee on Thursday targets assistance that directly benefits the Palestinian Authority, but not all econnomic aid to Gaza and the West Bank.