The US Senate wants to beef up legislation cutting aid to the West Bank and Gaza Strip after the House passed a watered-down version last year at the insistence of President Donald Trump’s peace envoy. 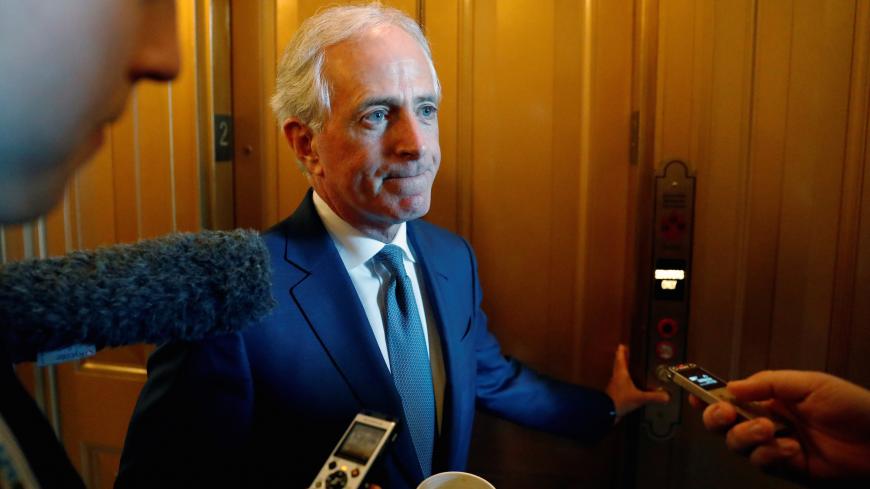 US Sen. Bob Corker, R-Tenn., speaks with reporters as he walks from the Senate floor between votes on procedural measures leading up to potential tax overhaul legislation at the US Capitol in Washington, Dec. 1, 2017.

The US Senate is moving forward with deep cuts to Palestinian aid, Al-Monitor has learned, overruling the White House and House lawmakers and potentially jeopardizing bipartisan support for the bill.

The chamber is expected to vote shortly on legislation slashing economic assistance to the West Bank and Gaza Strip unless the Palestinian Authority (PA) stops providing stipends to prisoners whom Israel has convicted of terrorism, as well as their families. The latest version of the Taylor Force Act, obtained by Al-Monitor, would undo House-passed exemptions for wastewater projects and childhood vaccinations and remove a clause ending the cuts after 2023.

“Corker will not allow the House-passed exceptions for child vaccinations and water treatment,” a congressional aide told Al-Monitor. “If he just took up the House text, it would pass the Senate without issue. Instead, he is making this an issue.”

Sen. Lindsey Graham, R-S.C., who originally introduced the bill, told Al-Monitor in November that he was “concerned” with some of the House provisions. He noted at the time that the Senate version already had roughly 90 senators lined up to vote yes. His original bill would have cut off all economic aid to the West Bank and Gaza, but revisions in both chambers limited the cuts only to aid that “directly benefits” the PA, a move that brought most Democrats on board with what was previously a partisan endeavor.

Corker’s apparent insistence on a more hard-line bill, however, could threaten that bipartisanship. The senator’s office did not respond to a request for comment.

Graham named his bill after the son of two of his constituents; the son was a US Army veteran stabbed to death in Tel Aviv by a Palestinian assailant in 2016. Israeli police killed the assailant, Bashar Massalha, at the scene and Israel retaliated by demolishing Massalha’s family home in the West Bank. The PA has distributed monthly stipends to his family since the attack.

The State Department is requesting $215 million in economic assistance for the PA in its fiscal year 2019 budget request. Because the United States provides no direct budgetary support to the PA and instead uses a portion of Palestinian assistance funds to pay off PA debts to Israel, it remains unclear how much economic aid Palestinians stand to lose. Both versions of the bill require the secretary of state to notify Congress how much economic aid “directly benefits” the PA within 15 days of the bill becoming law.

The Senate’s latest version maintains a previous exemption for the East Jerusalem Hospital Network, a specialty health-care facility offering services typically not available elsewhere in the West Bank and Gaza. But funding for childhood vaccination programs could now be in jeopardy unless the State Department specifically determines that it does not pose a direct benefit to the PA.

“I have no earthly idea why anyone would go through the House version of this bill and strike vaccinations to children,” a House aide told Al-Monitor. “Simply heartless.”

The Senate also dropped the House’s exemption for wastewater treatment programs even though the Trump administration has championed water treatment agreements between Palestine, Israel and Jordan as bolstering peace talks. Jewish Insider reported in November that Trump’s envoy for the Israeli-Palestinian conflict, Jason Greenblatt, asked the House to include the wastewater exemption. A spokesman for Greenblatt did not reply to Al-Monitor’s request for comment.

Furthermore, because House rules require bills in the lower chamber to have sunset clauses, the House bill would expire after 2023 whereas the Senate version would remain on the books perpetually. In order to pass the Senate’s version, House leadership would have to waive the rule requiring sunset clauses.

The Senate bill also sets more stringent requirements that the PA would have to meet to avoid the aid cuts. The Senate version requires the PA to repeal its laws that mandate the so-called martyr payments for prisoners (and their families) that Israel has convicted of terrorism, while the House version would allow the PA to take “comparable action that has the effect of invalidating any such law, decree, regulation or document.”

The pro-Israel lobby American Israel Public Affairs Committee only got behind the bill last year after the Senate Foreign Relations Committee amended it to avoid a total cut in economic assistance while creating exemption for the East Jerusalem Hospital Network. The committee also amended the bill to create a temporary escrow fund for withheld assistance. However, the new Senate version only sets aside withheld funds for one year before diverting the assistance to other countries, whereas the House version stipulates a more generous two-year holding period.

Despite the Senate’s efforts to undo the more lenient House bill, the Senate version does add one provision absent from the House bill that could help the Palestinians. Current law already requires the State Department to deduct a dollar in Palestinian assistance for each dollar the PA provides in stipends for convicted terrorists. The Senate’s latest version adds a provision that allows the withheld funds under the Taylor Force Act to count toward that pre-existing reduction in aid, so the Palestinians would not be penalized twice.