Al-Monitor gets preview of the Syrian Opposition Coalition’s request for assistance to the Senate Armed Services Committee. 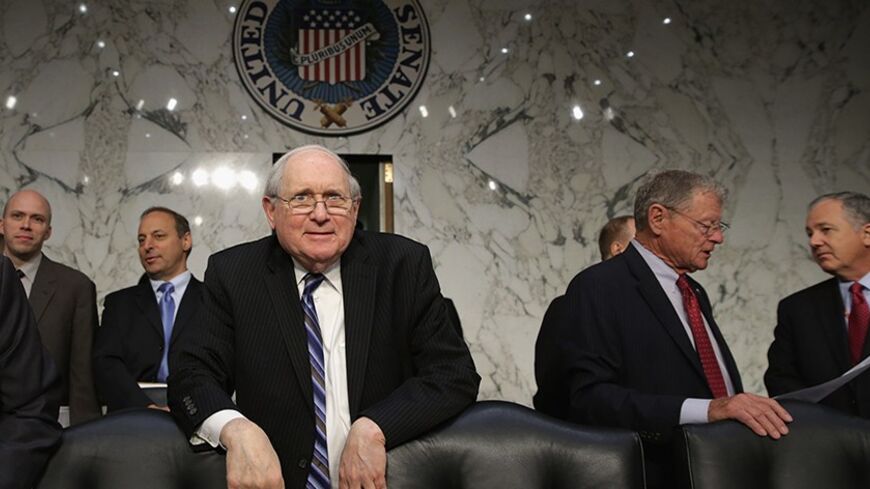 Senate Armed Services Committee Chairman Carl Levin arrives for a hearing with the US military Joint Chiefs of Staff in Washington, May 6, 2014. - GETTY IMAGES/Chip Somodevilla

The Syrian National Coalition is putting together a list of requests for military and other assistance as the Senate Armed Services Committee assembles its annual defense bill next week.

The panel chaired by Sen. Carl Levin, D-Mich., requested the memo during a meeting with President Ahmad Jarba and other leaders of the opposition last week, a top coalition adviser told Al-Monitor in an interview on Friday.

The request, which will be shared with the Armed Services, Foreign Affairs and Intelligence panels in both chambers, is expected to ask Congress to urge the administration to allow US allies in the region to share their anti-aircraft weapons with vetted members of the Western-backed opposition. Other likely asks include: More training and equipment for the opposition; expanding salaries for the Supreme Military Council; and increased support for the interim government and its aid arm, the US-backed Assistance Coordination Unit.

Opposition members hope some of those requests can be included in the National Defense Authorization Act (NDAA), which cleared the House Armed Services Committee on Wednesday and is scheduled to be marked up by the Senate panel on May 20-21. They’ll continue to press their case with members of the Senate next week — the House is out for a weeklong recess — and are notably expected to meet with Senate Minority Leader Mitch McConnell, R-Ky., and Senate Intelligence Committee Chairwoman Dianne Feinstein, D-Calif., as well as with President Barack Obama.

As it finalizes its defense bill, the Senate Armed Services Committee will notably have to decide whether to follow the House panel’s lead on putting new nonbinding restrictions on a final nuclear deal with Iran. The House bill also contains a provision calling on the Obama administration to enter into Status of Forces Agreements with Gulf countries in a bid to deter Iran.

In other congressional news, the Senate Foreign Relations panel is scheduled to hold a nomination hearing Tuesday on Obama’s picks to serve as ambassadors to Jordan and Djibouti, Alice Wells and Thomas Kelly. The panel will also hear from the US Agency for International Development’s assistant administrator for Europe and Eurasia, Paige Eve Alexander, the president’s choice to lead USAID’s Middle East bureau.

Wells currently serves as the senior director for Russia affairs and Eurasia at the National Security Council. She previously served as executive assistant to Hillary Clinton when she was secretary of state and before that as chief of staff to then-Undersecretary of State William J. Burns from 2009 to 2011.

Even with the lower chamber out on recess next week, the Middle East will be on many House members’ minds. The chairman of the House Homeland Security Committee, Michael McCaul, R-Texas, is leading a delegation to the region that departs tonight, Al-Monitor has learned.