The House passed a defense bill with contradictory guidance for assistance to the Syrian rebels. 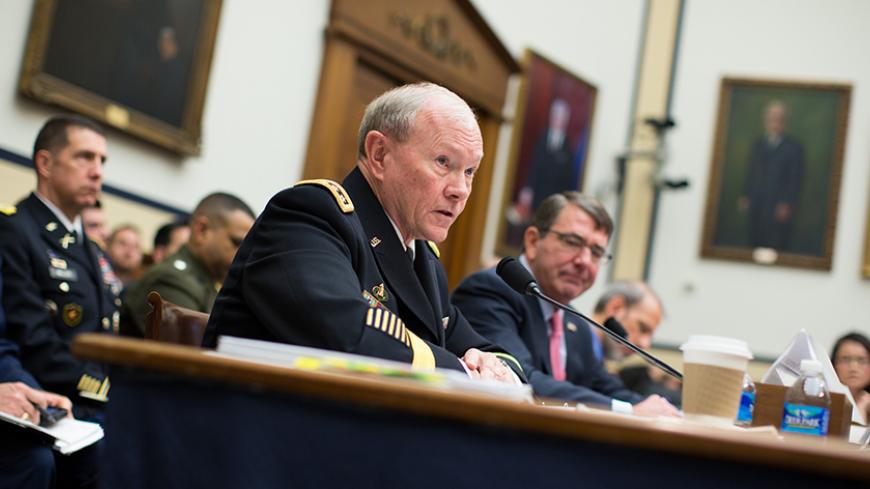 WASHINGTON — Congress just can't decide what to do about Syrian President Bashar al-Assad.

The House passed an annual defense bill on May 15 that instructs the Pentagon to ensure that Syrian rebels trained by the United States have the ability to defend themselves against Assad's forces. Another provision, however, seeks to blacklist vetted units and individuals from further US assistance if they fight the Syrian army instead of the Islamic State (IS).

"We [have] spent literally trillions of dollars in the Middle East in what many would describe as wars of choice and nation building," said Rep. Nick Nolan, D-Minn., who sponsored the provision to penalize Syrian rebels who have "misused" US military assistance. "All too often, the moneys have made a mockery of our good intentions and ended up in the wrong hands and in many cases used against us.

"The underlying legislation requires the Department of Defense ... to give us a list of who money has been given to in Syria and Iraq to fight [IS]. My legislation says that when they find evidence that those funds have been misused by anyone of those parties, they can no longer be recipients of our funding."

A separate provision from Armed Services Chairman Mac Thornberry, R-Texas, however, demands that the Pentagon certify to Congress that US-backed rebels are getting enough help to be "able to defend themselves from attacks by [IS] and government of Syria forces." Thornberry's amendment also requires that the Pentagon issue a "comprehensive strategy for Syria and Iraq" that includes a "description of United States policy and strategy for addressing the Assad regime in Syria and the post-Assad regime in Syria."

The House-passed bill also requires a Defense Department report on the feasibility of creating a no-fly zone. The Obama administration has made it clear it opposes doing so.

The House passed the defense bill on a 269-151 vote May 15. The focus now turns to the Senate, where the Armed Services panel cleared its version of the bill this week but has yet to make it public.

The Syrian rebels for their part have made it clear they won't let Congress hold them back.

"The moderate fighters in Syria are committed to fighting both [IS] and Assad and will remain steadfast on this goal and will use needed training and equipment to eradicate both cancers from the region," the Syrian Coalition's media office told Al-Monitor in a statement. "[IS] and Assad have an alliance in the region, where the joint target is those fighting for freedom and democracy. Both groups want to keep the area under their own oppressive totalitarian rule and work together to try to destroy the Free Syrian Army. Assad's oppressive rule is the source of extremism in the region and without targeting the root of the issue we will never attain a permanent end to the problem of extremism."

To make matters even more confusing, the committee report that serves as informal guidance to the executive branch on how to interpret the bill says nothing about Assad.

"The committee notes that the challenges associated with initiating the Syria train-and-equip program have been great," the report states. "The committee remains concerned about the elongated nature of the timeline to start the training and equipping of the vetted Syrian opposition. The committee will continue to conduct rigorous oversight of how this program fits into the overall strategy for Operation Inherent Resolve to determine whether it will be able to effectively contribute to the fight against the Islamic State of Iraq and the Levant."

The congressional debate over Syria is heating up again as the train-and-equip program by the Defense Department has finally begun in Jordan even as it faces further delays in Turkey. The program has been hamstrung from the beginning by dissenting views between the United States and its partners and within the US government about its goals.

Under current law, the program's goals are:

• "Defending the Syrian people from attacks by the Islamic State of Iraq and the Levant (ISIL), and securing territory controlled by the Syrian opposition."

• "Protecting the United States, its friends and allies, and the Syrian people from the threats posed by terrorists in Syria."

• "Promoting the conditions for a negotiated settlement to end the conflict in Syria."

"In broad terms, the administration argues that pressure must be brought to bear on the government of Bashar al-Assad to convince its leaders to negotiate a settlement to the conflict that would result in their departure from office," the Congressional Research Service concluded in a recent analysis of the provision. "Administration officials have not publicly described the precise nature of such intended pressure, the specific terms of its application, or potential measures of its success in achieving its related strategic ends."

The administration has continued to send mixed messages about its goals for the program.

In his 2016 funding request for Overseas Contingency Operations, President Barack Obama told Congress that the "program addresses the immediate need to build capacity of a partner on the ground in Syria to combat [IS]." And administration officials have been telling Syrian rebels that they need to focus on IS, infuriating many of them as the program begins in Jordan.

Under pressure however from Gulf allies to take a more active role in toppling Assad, the White House released a document after meetings with GCC countries at Camp David that called for "increasing support" for the rebels in the context of overthrowing Assad.

"The United States and GCC member states reaffirmed the importance of a genuine, sustainable political solution as soon as possible to end the war in Syria and prevent the further suffering of its people," says the annex to the joint statement issued after the summit. "All affirmed that Assad had lost all legitimacy and had no role in Syria’s future. They affirmed their commitment to working towards a post-Assad government that is independent, inclusive, and protects the rights of minority groups. The United States and the GCC member states committed to increasing support to the moderate opposition."

For Nolan, a longtime skeptic of the mission to train and equip vetted Syrian rebels who voted against its authorization last year, the chief worry is seeing the United States sucked into Syria's civil war. While his provision doesn't mention Assad by name, he made it clear that his intention was to prevent US assistance from being used against his forces.

"That would be in my judgment a misuse of the funds," Nolan told Al-Monitor. "And that's what we're trying to stop."

He points out that under current law, the Defense Department must report to Congress every 90 days on any evidence that trained rebels have "misused" the assistance. He hopes to force the Obama administration to decide once and for all what constitutes proper use of the program.

"What I want the Defense Department to do with this amendment is to say, 'OK, what the hell do you intend for this?' And then evaluate it and let us know if that's in fact what happened," Nolan said. "Depending upon the instructions that are associated with the approval of any particular funds, then DoD is going to have to evaluate it and say, were in fact the funds used for that purpose. And if they weren't, then we're going to have to cut them off."