Will Congress rein in US support for Syrian Kurds?

Turkey's concerns are starting to gain traction on Capitol Hill. 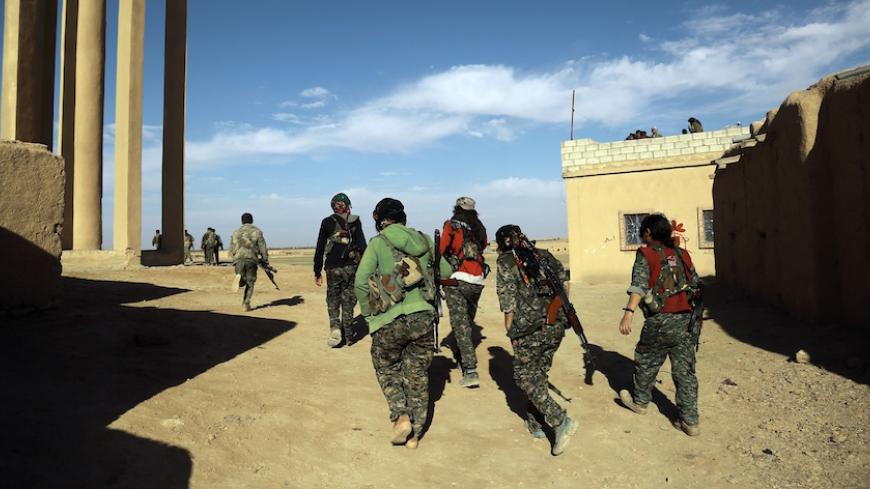 Turkey is finally starting to get through to US lawmakers about its concerns with American support for the Syrian Kurds, with potential repercussions for the fight against the self-proclaimed Islamic State (IS).

Fresh off a trip to the Syrian refugee camp in Gaziantep, Sen. Lindsey Graham, R-S.C., told reporters last week that the Obama administration's strategy of relying on the People's Protection Units (YPG) to destroy IS is "never going to work." The remarks were immediately picked up by the Turkish press, which eagerly framed them as evidence that Washington may be coming around to Ankara's point of view that the YPG is a close cousin to the Kurdistan Workers Party (PKK), a US-designated terrorist group.

"What I saw from Turkey was a real anxiety about our strategy in Syria," said Graham, a hawkish member of the Armed Services Committee who unsuccessfully ran for president this cycle. "Turkey is of the view that this strategy will never work and will never result in destroying [IS]. And they're very worried that the training of the Kurdish forces inside of Syria is going to flow into their side of the border. I cannot tell you how upset they are with our Syria policy."

Graham said he's had "a lot of discussions" with fellow members of the committee about his concerns that supporting the Syrian Kurds is a fool's errand because they have little incentive to attack IS' stronghold in Raqqa. The city is majority Sunni Arab and is located south of the Syrian Kurdish region along Turkey's southern border.

"There is no ground force that is both willing and able to [take] Raqqa, nor is there a realistic prospect of one emerging anytime soon," Senate Armed Services Committee Chairman John McCain, R-Ariz., said in a Dec. 17 floor speech on President Barack Obama's strategy to defeat IS. "The Syrian Kurds could take Raqqa but won't, and the Syrian Sunni Arabs want to but can't, partly due to our failure to support them."

Congressional hawks such as Graham and McCain also have misgivings about the Syrian Kurds because of their relative truce with Bashar al-Assad's regime. They and others argue the Syrian leader is fueling global recruitment for IS and must step down.

Asked if Congress has any appetite for trying to condition US aid to the Syrian Kurds — for example, as part of the annual Defense Authorization bill — McCain said it's possible.

"We've talked about it," he told Al-Monitor. "I don't know what the attitude of the committee is, because we haven't had a hearing or anything. We'll be looking at it very carefully."

Such a move could prove a tough sell, however, even among committee members who share Graham's concerns about antagonizing Turkey.

"The Kurds and the Turkish leaders have their problems, but they're actually a vital part of a force that could expel [IS] and try to stabilize Syria," said Thom Tillis, R-N.C., who was on the Turkey trip with Graham. "So we've got to figure out how to have a policy to continue to provide some level of support and encouragement to them as we do with the Kurds in Iraq."

A similar debate has been raging inside the Obama administration for several months. While some officials are incensed that the Syrian Kurds have attacked CIA-trained Sunni rebels battling the Assad regime around Aleppo in the north of Syria, as Bloomberg reported in February, others are impressed with the Kurds' battlefield successes against IS.

Increased US support for the YPG can be traced back to the dismal failure of the administration's $500 million plan to "train and equip" the Syrian Sunni opposition. The US military airdropped 28 bundles of weapons, ammunition and supplies to the Syrian Kurds battling IS in Kobani in October 2014 as Turkey stayed on the sidelines, and has continued its support since.

Since then, Ankara has continued to pressure the United States to revise its stance. After Brett McGurk, the special envoy to the international coalition fighting IS, visited Kobani earlier this year, President Recep Tayyip Erdogan blew up, demanding to know, "Who is your partner — the terrorists in Kobani or me?"

The Syrian Kurds are pushing back with their own campaign to influence US policymakers.

"The YPG's fight is about Syria, not Turkey," Saleh Mohamed — co-president of the Democratic Union Party (PYD) — wrote in an April 11 New York Times op-ed demanding a seat at the table in the ongoing Syria peace talks. The YPG is the PYD's militant wing.

The State Department has continued to try to work with both sides.

"What we’ve said, and we’ve said this last week as well and our policy has not changed, is that we believe the YPG is not affiliated with the PKK," department spokesman Mark Toner said at his Feb. 22 briefing. "However, we recognize Turkey’s concerns over PKK and terrorism on the ground and its right to defend itself, but we have urged it to stop shelling over the border. We’ve also told the YPG that it should stop taking actions on the ground in and around Aleppo that, frankly, are counterproductive to the situation on the ground, to a de-escalation of the situation on the ground."

Barak Barfi, a research fellow at the New America Foundation, argues that lawmakers are wrong to dismiss the Syrian Kurds' importance in taking back Raqqa. He argues in a new report for the Washington Institute for Near East Policy that the YPG can be a key player in defeating IS in Syria, as long as US aid is forthcoming.

"The more you work with them," Barfi told Al-Monitor, "you can tone down their localized aspirations for autonomy [and] federalism [and] try to integrate them into the Syrian opposition and reduce tensions with Turkey."