Lawmakers laid the groundwork for arming the YPG back in 2014. 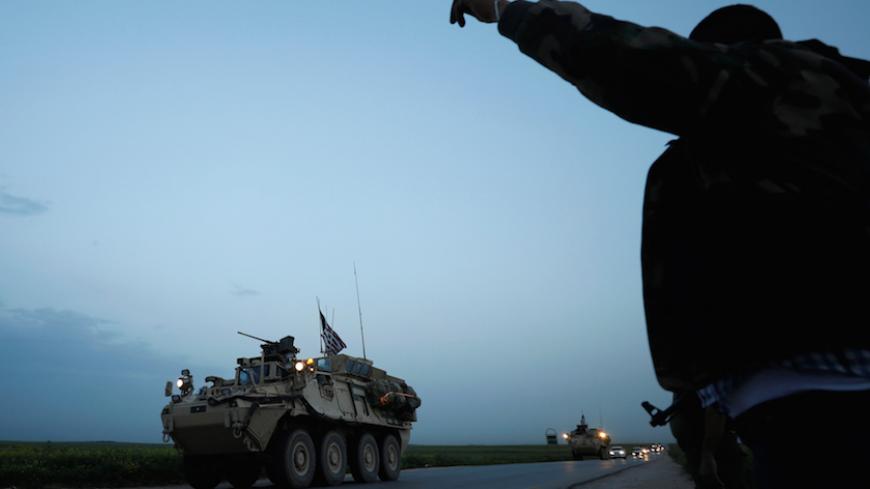 A Kurdish fighter from the People's Protection Units (YPG) gestures at a convoy of US military vehicles going past in the town of Darbasiya, Syria, next to the Turkish border, April 28, 2017. - REUTERS/Rodi Said

Lawmakers laid the groundwork for Trump's May 8 decision to provide weapons to the People's Protection Units, or YPG, when they passed legislation to train and equip Syrian rebel groups fighting the Islamic State (IS) in December 2014. Since then, the YPG has emerged as one of America's most reliable allies as the US-led anti-IS coalition prepares to take back the militants' stronghold of Raqqa in the next few months.

"To me, it's the only viable solution right now," Senate Foreign Relations Committee Chairman Bob Corker, R-Tenn., told reporters on Capitol Hill. "And obviously the Kurds have got to have the weaponry to be successful. So I'm glad they're finally following through on what they've known for some time: This is the only course that appears to be feasible relative to Raqqa."

The move, however, is infuriating to NATO partner Turkey, which views the YPG as an irredentist terrorist group indistinguishable from the Turkey-based Kurdistan Workers Party, or PKK. The decision to arm the YPG had long been expected but was postponed until last month's referendum in Turkey to avoid ginning up anti-American sentiment that could have played into President Recep Tayyip Erdogan's bid for more power. In the end, Turks narrowly voted on April 16 to transition from a parliamentary to a presidential system.

Asked about his concerns about upsetting Turkey, Corker said US and Turkish objectives "are not aligned right now."

Other lawmakers pointed to the US military's insistence that the Syrian Kurds are America's best allies on the ground as reason enough to move forward. Lt. Gen. Stephen Townsend, the head of the US-led coalition against IS in Iraq and Syria, said in early March that Syrian Kurdish forces would participate in the battle for Raqqa "in some form or fashion," and that he had seen "absolutely zero evidence" linking the YPG to the PKK.

"I'm thankful that we finally have an administration that's listening to the advice coming from those military leaders and those that know the situation on the ground," said Senate Armed Services member Joni Ernst, R-Iowa, a longtime proponent of directly arming peshmerga forces in Iraq.

In a May 9 statement announcing the decision, the Pentagon played down any long-term commitment to the YPG, framing the aid as being limited to what is "necessary to ensure a clear victory over [IS] in Raqqa."

"We are keenly aware of the security concerns of our coalition partner Turkey," said Pentagon spokeswoman Dana White. "We want to reassure the people and government of Turkey that the US is committed to preventing additional security risks and protecting our NATO ally."

White went on to assert that the United States "continues to prioritize our support for Arab elements" of the Syrian Democratic Forces. The Pentagon, she said, insists that "Raqqa and all liberated territory should return to the governance of local Syrian Arabs."

Some lawmakers remain concerned, however.

"That's a really tricky dance. And ultimately you may be inviting more problems than you're solving by pushing the Turks off to the side and making them antagonists to a future reconciliation process inside Syria," Senate Foreign Relations member Chris Murphy, D-Conn., told Al-Monitor. "There are no good options in Syria. But generally giving people arms creates more problems than it solves."

While Murphy has long resisted US intervention inside Syria, some of his colleagues who support regime change share similar concerns. Senate Armed Services Chairman John McCain, R-Ariz., and Armed Services member Lindsey Graham, R-S.C., have long argued that overrelying on Syrian Kurds who largely coexist with Syrian President Bashar al-Assad may not be conducive to a long-term solution to the Syrian civil war.

"That's the basic trade-off: Do you slow the Raqqa campaign and search for an alternative approach, which is the McCain-Graham approach, and thereby try to preserve a stronger relationship with Turkey? Or do you go with the CENTCOM [US Central Command] approach, which is you need to do Raqqa fast while you have the momentum against the Islamic State, and Turkey cannot generate the forces it needs to take the city?" said Aaron Stein, a senior fellow at the Atlantic Council. "That's the broad outline of the debate."

For all the attention paid to Trump's decision to arm the YPG, lawmakers point out that this larger strategy for Syria remains in flux.

"That's the $64,000 question — how do we work with a NATO ally, how do we support our strongest battlefield partners, how do we do both of those things at the same time?" Sen. Tim Kaine, D-Va., the top Democrat on the Senate Foreign Relations Committee's Middle East panel, told Al-Monitor. "I don't really know how these pieces are fitting together."

by Murielle KASPRZAK and Joseph SCHMID | AFP | May 26, 2022
END_OF_DOCUMENT_TOKEN_TO_BE_REPLACED