US threatens to bypass Baghdad, arm Sunnis against IS

Congress and the Obama administration are demanding that Prime Minister Haider al-Abadi do more to combat sectarianism. 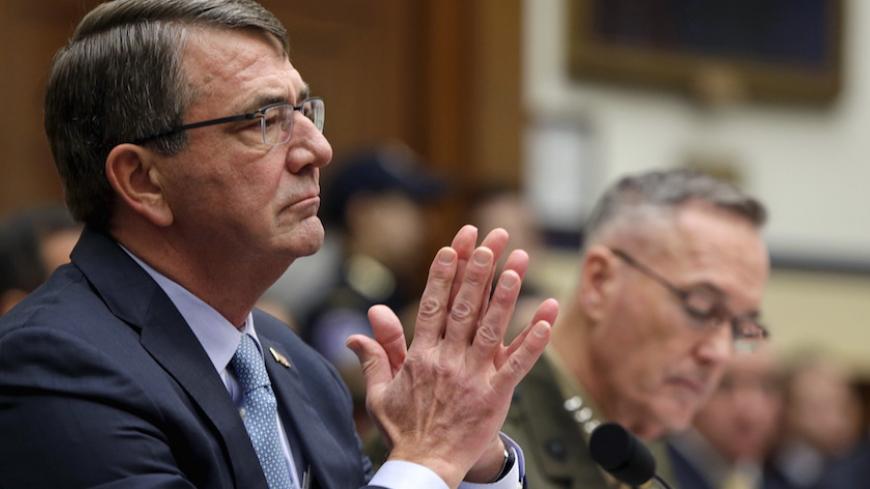 US Defense Secretary Ash Carter (L) and Joint Chiefs Chairman Marine Corps Gen. Joseph Dunford Jr. testify before a House Armed Services Committee hearing on "US Strategy for Syria and Iraq and its Implications for the Region" in Washington, Dec. 1, 2015. - REUTERS/Gary Cameron

The United States has put Baghdad on notice that it could lose military support if Prime Minister Haider al-Abadi doesn't do more to integrate Sunnis.

Lawmakers of both parties have run out of patience with Shiite sectarianism that is seen as a major obstacle preventing more Sunni tribes from turning against the self-proclaimed Islamic State (IS). Their frustration boiled over at a Dec. 1 hearing of the House Armed Services panel during which legislators demanded that the Obama administration turn the screws on Baghdad.

"Are we ... sitting side by side with them and being very clear in our communication that the funding that they're getting by the will of the American taxpayer is at risk and they will lose it if they don't progress?" asked Rep. Chris Gibson, R-N.Y., a veteran of four combat tours in Iraq. "That's the kind of leverage I'm talking about."

The top civilian and military defense officials both concurred.

"That's the kind of leverage I'm talking about too," Defense Secretary Ash Carter answered. "And the answer is yes."

And the chairman of the Joint Chiefs of Staff, Gen. Joseph Dunford, said he wouldn't hesitate to recommend that the United States directly support other actors on the ground if working with Abadi doesn't pan out. Many Sunnis have been reluctant to fight IS because they feel discriminated against by the government in Baghdad and threatened by Iran-backed Shiite militias.

"I don't personally have a better idea than to enable the current government of Iraq to be successful, to provide the kind of stability and security within which we won't see organizations like [IS]," he said. "And if at any point in the future ... I believe that assumption — that we can get there — no longer obtains, then I will recommend a completely different campaign plan to get after [IS] inside of Iraq."

The comments come amid a renewed lobbying push by Sunni tribal leaders intent on getting their concerns heard in Washington. They argue that Iranian influence runs deep in Baghdad and that Abadi's hands are tied.

At least five different groups of Iraqi Sunni leaders have registered to lobby on behalf of Sunni interests over the past 18 months, including the nonprofit Peace Ambassadors for Iraq just last week. The nonprofit is chaired by Sheikh Jamal al-Dhari, who recently told The Washington Times that Russia has been courting Sunni tribal leaders frustrated by US admonitions that they work out their concerns with Baghdad.

The Dec. 1 hearing and other recent statements by lawmakers suggest their message is getting across.

Sens. John McCain, R-Ariz., and Lindsey Graham, R-S.C., called for the creation of a 100,000-man strong Sunni Arab and Turkish force during a visit to Baghdad this past weekend. The issue of Sunni dissatisfaction has also bled into the presidential race.

"We need to lay the foundation for a second Sunni awakening," Democratic presidential front-runner Hillary Clinton said in her Nov. 19 Council on Foreign Relations speech. "We need to put sustained pressure on the government in Baghdad to get its political house in order, move forward with national reconciliation, and finally stand up a national guard. Baghdad needs to accept, even embrace, arming Sunni and Kurdish forces in the war against [IS]. But if Baghdad won’t do that, the coalition should do so directly."

And Sen. Marco Rubio, R-Fla., a top-tier presidential candidate, has called for the United States to deploy special operations troops to aid a ground force of Sunni Arabs.

“It’s the only way to do it," he said Nov. 22. "They have to be defeated by a ground force and have to be made up primarily of Sunnis."

The committee that grilled Carter and Dunford had previously taken the lead in authorizing the Obama administration to directly support Kurdish and Sunni forces. The provision is included in the annual defense bill that President Barack Obama signed into law last week.

"What is our strategy to get Sunnis in Iraq to be willing to fight [IS]?" asked the top Democrat on the committee, Rep. Adam Smith, D-Wash. "What is the concrete, clear plan to make that happen?"

Carter said there were four "streams" through which the United States is working with Baghdad to get more Sunnis into the fight. He indicated frustration with the progress with at least two of them.

The second stream, he said, is the Popular Mobilization Units, mostly militias of Shiite tribal fighters that operate under the umbrella of the Iraqi Ministry of Interior.

"This is where we have a problem: The Iraqi government has authorized many more Shia than Sunni [units], Carter said. "We need them to authorize more Sunni [units] and we are prepared to train them."

He said the elite US-trained Iraqi counterterrorism force and the Kurdish peshmerga are the other two streams. He also said Sunni police would also play a crucial role once IS is dislodged from Sunni areas.

"It's not going to work for Shia forces to participate in holding and governing those," Carter said. "We need Sunni police forces and we're working on them too, so that when Ramadi is recaptured, when Mosul is recaptured, the peace can be kept there by people who are local."

Dunford said continued US military aid was contingent upon progress in those areas.

He said one metric "is the specific number of Sunnis that we think need to be integrated and trained … and we are working that with the Iraqi government." Dunford added, "That's a recognized objective and they know our support is contingent upon meeting certain conditions."

Some lawmakers weren't buying it, and urged Carter and Dunford to follow through on such threats.

"Will we really walk away from Iraq if the government doesn't meet those conditions?" asked Rep. Beto O'Rourke, D-Texas.

Carter doubled down. He said the United States' "leverage involves offering to do more for those who are pursuing the same objectives, and withholding our support from those who are taking a different path and not going down the path they're supposed to."

He suggested the United States could bypass the Abadi government if it doesn't find a way to convince Sunnis that fighting IS is in their best interest.

"So we find alternatives; we find people who will act, if the people that we're dealing with are not capable of that," Carter said. "Because we have to act. And we will find such forces that are capable."