Some in Congress share concerns that Sunnis aren't ready to take on the Islamic State. 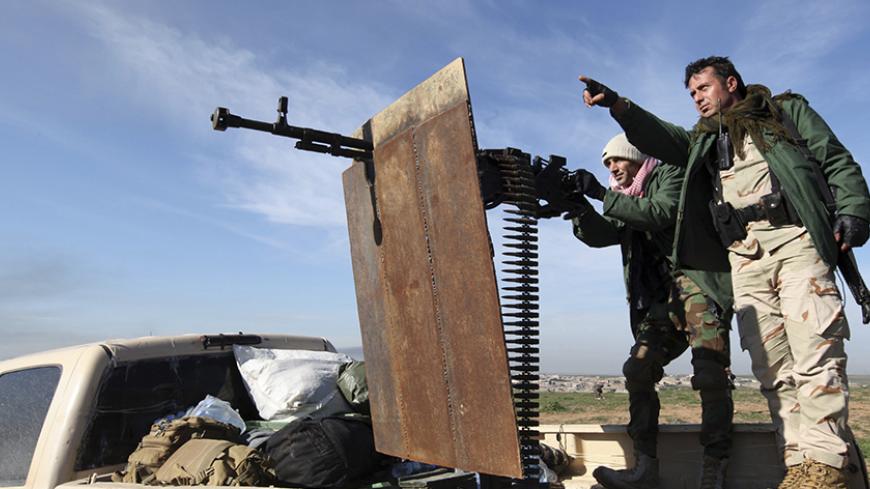 Kurdish Peshmerga fighters keep watch during the battle with Islamic State militants on the outskirts of Mosul, Jan. 21, 2015. - REUTERS/Azad Lashkari

A vital ally in the war against the Islamic State (IS) is making it increasingly clear that it wants the United States to call off its planned spring offensive.

The Iraqi Kurds were "surprised" by last week's US Central Command announcement that an attack on Mosul could take place in April or May, their new representative to the United States told reporters on Feb. 26. Bayan Sami Abdul Rahman cautioned that the Iraqi army wouldn't be ready and that Sunni tribes weren't united in how to deal with the aftermath if Iraqi forces do manage to take back Iraq's second largest city.

"I have to say I and my colleagues were surprised by the announcement by the US that there might be a spring offensive on Mosul," Abdul Rahman said. The plan, which was laid out for reporters last week, calls for a force of about 25,000 troops, including three Kurdish brigades although they would not be at the "tip of the spear."

"Without the Sunni community in Mosul on our side, how do we expect to take Mosul and then sustain that victory?" she said. "From our point of view ... we don't want a situation where Mosul is attacked and then you've got another humanitarian crisis with another flow of hundreds of thousands of people — and they will come to Kurdistan."

The warnings from a key US partner have emboldened congressional critics of President Obama's IS strategy.

"We should very much be listening to their counsel, because they have been an effective fighting force on the ground, they understand fully the conditions there," Sen. Kelly Ayotte, R-N.H., told Al-Monitor. Ayotte is a member of the Senate Armed Services Committee and a strong supporter of the Kurdistan Regional Government's request to have US weapons delivered straight to Erbil rather than first going through the central government in Baghdad.

Senate Armed Services Chairman John McCain, R-Ariz., agreed that the Iraqi army won't be ready by spring after collapsing under assault from IS last June.

"I've heard that everywhere. That's why I was so astounded at the Centcom comment that they would be ready in a couple of months," McCain told Al-Monitor. "Every estimate that I've heard is that it was far greater than that."

Sources from the front lines in Kurdistan confirmed to Al-Monitor that they don't see a clear plan to remove IS from Mosul this spring. They said they also remain concerned that even if the militants were expelled from Mosul, the Iraqi army doesn't have the capacity to keep Mosul secure.

The Kurdish region is already struggling under the strain of an estimated 1.5 million to 2 million refugees from the conflict in Syria and Iraq, leading to a spike in ethnic and sectarian tensions. The Kurds are allegedly stopping Arab families from returning to their homes in areas liberated from IS according to a Human Rights Watch report released Feb. 26.

The Department of Defense says the offensive will not begin until the Iraqis are ready.

Last week's briefing "caveated that the projected timeframe of any offensive to retake Mosul was conditions-based and not intended to reflect firm plans," Maj. Curtis Kellogg, a Centcom spokesman, said in an email. "As we've said from the beginning, any offensive will be Iraqi-led and U.S.-supported, and launched only at a time when it can succeed."

The issue of timing may well come up in the House Armed Services Committee next week after Chairman Mac Thornberry, R-Texas, vowed to press administration witnesses on the Mosul offensive during an upcoming hearing on the president's use-of-force request.

Abdul Rahman's comments echo similar concerns expressed to NPR over the weekend by Masrour Barzani, the head of Kurdish security and intelligence services.

"I wish I could tell you that they are ready, but they are not, and this is very unfortunate," Barzani said of the Iraqi army. He added that "any plan to liberate Mosul has to be well calculated and well coordinated."

"The liberation of Mosul should not really lead to another mass exodus of people elsewhere," he said. "That would happen if the operation fails."

Abdul Rahman went further, however, in making it clear that the spring timeline doesn't seem reasonable to the Kurds.

"We're in a dilemma: On the one hand, I don't think we should try to retake Mosul until the Iraqi forces are ready, the Sunni community is on board, and all those things are in place," she said. "On the other hand, the longer Mosul is in [IS]'s hands, the worse it gets. That is our dilemma, that's the dilemma for the US, and it's something that we have to deal with. But right now I don't think we're ready for that offensive."

Left largely unsaid are concerns that Iran-backed Shiite militias that are fighting alongside the Iraqi army may gain a foothold in the Sunni heartland if operations against IS continue apace while the Sunnis are divided. Counterinsurgency expert and Marine veteran Bing West pointed out Feb. 25 in a piece for the conservative National Review Online that Iran has "7,000 troops and advisers working with the Shiite militias fighting alongside the Iraqi Army."

"This operation would make America the de facto wartime partner of Iran," West wrote. "If the Shiite Iraqi Army did capture the destroyed Sunni city, Iran would stand out as a winner, having extended its regional power into a Sunni heartland. How would the White House explain that outcome to Sunni states like Saudi Arabia, the United Arab Emirates, and Egypt — already estranged by the administration’s actions over the past six years?"

McCain agreed with those concerns.

"The only people that are succeeding are Shiite militias, and that's Iranian surrogates," he said. "We better reconstitute the Iraqi military and we have to understand the penetration and influence that the Iranians have — it is huge."

Taking back Mosul is seen as key to rolling back IS and blunting its successful image, which has helped it recruit volunteers from around the world. But lawmakers agree with the Kurds that it's better to wait than rush into a fight ill-prepared.

"The most important thing is that we win the fight that we take back to [IS]. That has to be priority one," Ayotte told Al-Monitor. "We'd send the worst possible signal if we went after Mosul, and didn't take it back."