Congress split on keeping Iraq together 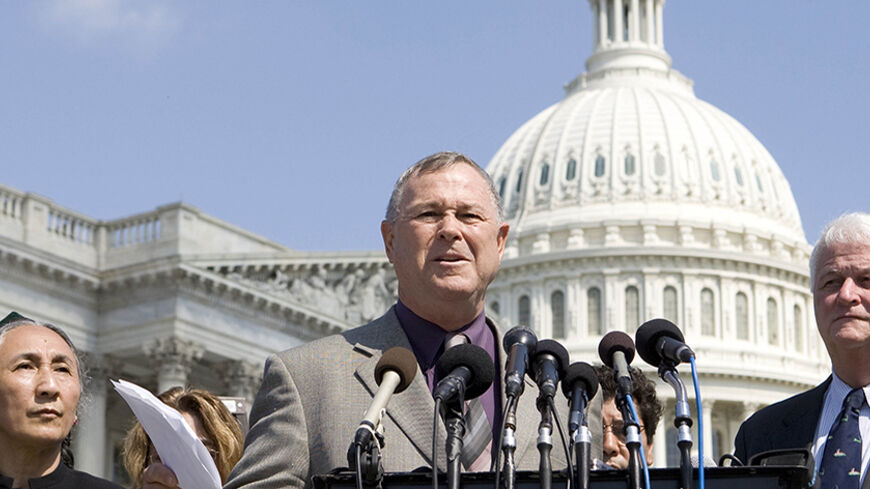 US Rep. Dana Rohrabacher (C) speaks at a news conference outside the US Capitol in Washington, July 10, 2009. - REUTERS/Larry Downing

Lawmakers of both parties urged the Barack Obama administration to rethink its support for a united Iraq during a July 23 hearing on the threat posed by Islamist militants.

The rapid gains by the Islamic State group (IS) have rekindled calls for a reassessment of US policy in the country. Pro-Kurdish lawmakers say the time is ripe to back the Kurds' calls for greater autonomy and even independence, pointing to the Peshmerga militia's ability to keep militants at bay while the dispirited national army cut and ran.

"Maybe we have to give up on the idea, after 12 years of trying, of a strong, central, functional government that holds sway over the whole country based in Baghdad," Rep. Gerry Connolly, D-Va., said at the House Foreign Affairs hearing.

Ranking member Eliot Engel, D-N.Y., said the administration was holding the Kurds "hostage" by continuing to back a strong central government that's plagued by political paralysis.

"I just don't feel that it's fair to hold the Kurds hostage, because we've, unfortunately, screwed up things in Iraq, and everything is falling to pieces," Engel said during the hearing. "We're essentially saying to the Kurds, 'You know what, you have to be the glue that keeps Iraq together, and therefore we're going to deny you your aspirations.' I'm not quite sure that's fair."

"Let me say that as far as I am concerned, the United States should not be having to … limit what solutions we can possibly have based on what the British Empire determined 100 years ago," said Rep. Dana Rohrabacher, R-Calif. "So with that said, I would hope that we would be open to situations like having an actual Kurdistan exist."

And Rep. Paul Cook, R-Calif., declared himself a "strong, strong supporter of Kurdistan."

"The point has been made that not one person, military person, was killed in Kurdistan," Cook said.

The calls echo a 2006 New York Times op-ed by then-Sen. Joe Biden (D-Del.) and foreign affairs expert Leslie Gelb advocating for partitioning the country into three "largely autonomous regions with a viable central government in Baghdad." Under the proposal, the Kurdish, Sunni and Shiite regions would each have been responsible for their own domestic laws, administration and internal security, with the central government handling border defense, foreign affairs and oil revenues.

Chairman Ed Royce, R-Calif., said the current crisis is fueled by Prime Minister Nouri al-Maliki's sectarian rule. With a unity government in charge instead, he said, Sunnis, Shiites and Kurds could yet come together behind a Baghdad-based government.

"Everybody's making this case today because of frustration with Prime Minister Maliki," Royce told Al-Monitor. "But what's driving it within Iraq and internationally — what's driving the discussion of what's next — is the fact that he won't stand down. And this has created a crisis."

Witnesses for the State and Defense departments also made it clear the Obama administration still doesn't embrace Kurdish independence.

"Think about what that means in that neighborhood and territory that they're left in if you don't have a strong, capable government in Baghdad that's able to blunt those [IS] threats," testified Elissa Slotkin, who is acting principal deputy undersecretary of defense for policy.

"They've got Syria, they've got the situation on their southern border right there. They've got Iran on the other side. That is a tough neighborhood," she said. "So, from a security point of view, the single best blunt, frankly, to both [IS] and to a strong, dominant Iranian influence in Iraq is a strong, capable federal government based in Baghdad."

Brett McGurk, the deputy assistant secretary of state for Iraq and Iran, said the United States would be abandoning the Iraqis who voted in recent legislative elections if the government turns its back on a unified Iraq.

"Iraq just had an election; 14 million Iraqis turned out to vote, almost a 62% turnout, a higher turnout than most elections all around the world," McGurk testified. "That showed the democratic aspirations of the Iraqi people. We can't let them down."

Connolly said the administration's testimony amounted to an aspiration, not a policy. He said growing Turkish support for an independent Iraqi Kurdistan should be an "important factor" in any reassessment of US policy. And he said that the US policy of opposing direct Kurdish oil sales to foreign clients without passing through Baghdad should also be reviewed.

"That flows from the precept that we favor a strong, central, functional government in Baghdad," Connolly said. "If, in a reassessment you realize, noble though that is, that's not achievable anymore, then I think you need to reassess that, too."

Iraq's ambassador to Washington, Lukman Faily, attended the hearing. He told Al-Monitor in a brief hallway interview after the hearing that McGurk was doing a "great job" and that the Obama administration has shown no sign of giving up on Baghdad despite the mounting pressure for Maliki to step down.

"We have a federal government; we have a new parliament; likely a Kurdish president will be elected," Faily said. "So in that sense they're still an integral part of Iraq. We will keep that. As far as I know everyone is behind us on that."