MEK leader to testify before Congress

Maryam Rajavi will discuss the threat the Islamic State poses to members of the Mujahedeen-e-Khalq (MEK) at Camp Liberty. 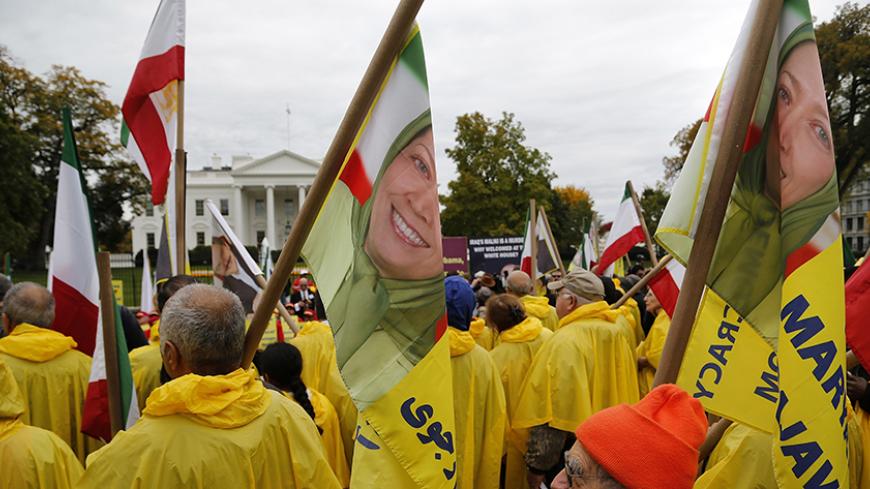 Supporters of Iranian opposition group Mujahedeen-e-Khalq hold flags showing Maryam Rajavi, head of the National Council of Resistance of Iran, as they rally against Iraq's Prime Minister Nouri al-Maliki hours before he met with US President Barack Obama, at the White House in Washington, Nov. 1, 2013. - REUTERS/Jonathan Ernst

The leader of a controversial group devoted to regime change in Iran is set to testify before Congress next week.

Maryam Rajavi, the president-elect of the Paris-based National Council of Resistance of Iran (NCRI), will testify via videoconference April 29 at a House Foreign Affairs terrorism panel on "ISIS: Defining the Enemy." The council is an umbrella group of Iranian dissident groups that includes the Mujahedeen-e-Khalq (MEK), which was removed from the State Department's terrorism list in 2012 after an intense lobbying campaign and has since spent hundreds of thousands of dollars to raise its profile on Capitol Hill.

Other panel members backed the controversial decision to invite a group that has been tied to attacks against US business and diplomatic interests in Iran under the Shah. The MEK renounced violence in 2001.

"I'd be very surprised if leaders of [Ireland's] IRA or Sinn Fein haven't been involved in official congressional business over the past two decades," said Rep. Brad Sherman, D-Calif. "It's clear that the MEK has revealed things about the Iranian government and its nuclear program that no one revealed. I would say the MEK is a very valuable source of information, whether it's Fordow, whether it's the original nuclear program, etc. And so since they've been a good source of information about important matters, those are the kinds of people you listen to at a hearing."

"I think it raises a lot of eyebrows and also raises a lot of questions about propriety," said Rep. Gerald Connolly, D-Va., a former Hill aide who sits on the full committee but not Poe's panel.

"You're talking to somebody who staffed a committee for 10 years," Connolly said. "I know this: I took great care about vetting who came before the committee as witnessses. You've got to take care so that you're not embarrassing anybody, and you're not unintentionally bringing people who may or may not bring credit to the process and to the institution. I would hope that all of those factors were weighed."

The Barack Obama administration believes Rajavi's group is trying to derail its negotiations with Iran and has raised doubts about its recent purported revelations about illicit nuclear activity. The group's claim to fame came in 2002 when it publicly revealed the location of an undisclosed nuclear facility at Natanz, but questions about how much the United States and Israel already knew at the time have swirled ever since.

"They've shown time and time again that they're not the most credible voice," an administration official told Al-Monitor.

The official went on to urge lawmakers to be wary of any claims that the NCRI — a group that fought alongside Saddam Hussein in the Iran-Iraq War and has alleged ties to the CIA and Israel's Mossad — represents a viable Iranian opposition.

"In the absence of anyone else who can be defined in this town as an Iranian opposition, you get people wanting to point to her and her group as the opposition," the official said. "That's, I think, the very dangerous part."

The NCRI did not respond to a request for comment.

Poe said he had invited Rajavi to testify about the threats the Islamic State (IS) poses to MEK members who remain at Camp Liberty in Baghdad. The NCRI has accused Iranian-backed militias of ramping up rocket attacks against the refugee camp in recent weeks.

"I've heard reports from many sources of the threat to this camp because these folks cannot leave," Poe told Al-Monitor. "They're just one group that's being threatened by [IS], and we want to show all of the intricacies of [IS] and what they're doing."

Although committees usually avoid asking non-US citizens to testify, Poe said it made sense to get Rajavi's perspective in this case.

"She knows more about what's taking place at Camp Liberty than any person, anywhere," he said. "And that's why she's testifying."

A senior committee aide called the invitation to invite Rajavi "surprising," however, since the group has, to the source's knowledge, never mentioned IS in its communications with staffers before.

Rajavi isn't the only controversial witness for a hearing that promises a few fireworks. Also invited: Walid Phares, a foreign policy adviser to Mitt Romney's 2012 presidential campaign with controversial ties to Lebanese Christian militias; and Robert Ford, President Obama's ambassador to Syria who quit last year after losing patience with the administration's lack of commitment to the Free Syrian Army.