Lobbying 2016: Iranians in America battle over US rapprochement with Tehran 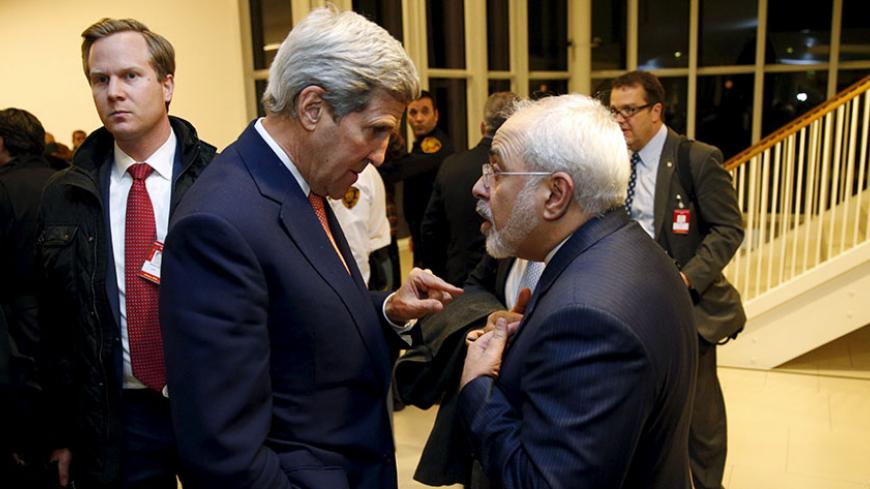 US Secretary of State John Kerry talks with Iranian Foreign Minister Mohammad Javad Zarif after the International Atomic Energy Agency verified that Iran has met all conditions under the nuclear deal, in Vienna, Jan. 16, 2016. - REUTERS/Kevin Lamarque

Congress and the White House don’t see eye to eye on burying the hatchet with Iran.

Neither does the million-strong Iranian diaspora in the United States.

A number of Iranian-Americans have joined two competing organizations that share starkly different views about how Washington should deal with Tehran, from ending sanctions to toppling the clerical regime. Both groups claim to represent the "real" Iran while denouncing their rival as a tool of foreign masters, further deepening the already substantial ideological polarization among US policymakers when it comes to Iran policy.

In one corner is the National Iranian American Council (NIAC) , a nonprofit created by a Swedish-Iranian former congressional staffer in 2012 to advocate closer ties with Tehran. NIAC founder Trita Parsi was a staunch supporter of last year’s nuclear deal and now advocates ending the trade embargo, arguing that closer diplomatic and commercial ties will increase US leverage while staving off the risk of war.

“Americans won’t succeed at influencing the decisions of Iran’s leadership, or the opinions of the Iranian people, without increasing ties with Iran,” Parsi co-wrote with NIAC fellow Tyler Cullis in a July 12 Washington Post op-ed. “Permitting competitors’ unrivaled influence over one of the region’s major powers, the United States risks losing its ability to shape favorable outcomes in the Middle East, whether in the Syria conflict, the sectarian stalemate in Iraq or the transit of US naval forces in the Persian Gulf.”

A distinctly different discourse emanates from supporters of the National Council of Resistance of Iran (NCRI), a Paris-based organization of dissidents who fought Shah Mohammad Reza Pahlavi in the 1970s before turning against the mullahs. The NCRI has an office in Washington, across the country from the West Sacramento headquarters of the nonprofit Organization of Iranian-American Communities-US (OIAC), which shares its message of regime change and claims chapters in 40 states.

“No version, form, or faction of the current regime represents the Iranian people or their democratic aspirations,” the OIAC states on its website. “The current regime must therefore be replaced in its entirety: by the people of Iran and their organized resistance.”

Each side has sought to forge relations with US policymakers while seeking to demonize the other, with varying levels of success.

Parsi has long had to fend off accusations that he’s Iran’s man in Washington. Critics in particular point to his close ties to people inside Iran as well as emails between him and the then-ambassador to the United Nations, Mohammad Javad Zarif, made public during a NIAC defamation lawsuit against one of its detractors, that show Parsi and Zarif discussing outreach to US lawmakers seeking better relations with Tehran during the George W. Bush administration.

Parsi told Al-Monitor that he was first introduced to Zarif, now Iran’s foreign minister, when he was an aide to former congressman Bob Ney, R-Ohio, in the early 2000s. Ney was sentenced to 30 months in prison in 2007 for his role in a lobbying corruption scandal.

“It wasn’t uncommon at all that members of Congress would ask me, ‘Hey, how can I talk to [Zarif], how can I have access to the Iranians’?” Parsi told Al-Monitor. “Keep in mind, when all of this is happening this is when talk of war with Iran is almost at its height.”

The organization has also been accused of skirting lobbying disclosure rules, and Sen. Jon Kyl, R-Ariz., unsuccessfully sought a Justice Department probe in 2009. NIAC launched a separate NIAC-Action entity last year to take over most of the group’s lobbying, but that organization hasn’t registered as a foreign or domestic lobbyist either.

“The organization and its staff spends less than 20% of time and resources on lobbying,” Executive Director Jamal Abdi told Al-Monitor in an email, “so we don't meet the threshold that triggers the requirement to register under LDA [Lobbying Disclosure Act].”

Parsi flatly denies lobbying for Iran and insists his advocacy is solely on behalf of Iranian-Americans who seek to defuse US-Iran tensions. He said NIAC has a mailing list of 70,000 people and a donor base of about 8,000 people who give anywhere from $5 to $150,000 a year; 80-85% of its revenues ($1.1 million in 2014 according to IRS records) comes from donors, Parsi said, with the rest from foundations such as Ploughshares and the Rockefeller Fund.

Today’s critics, Parsi said, are the same Iran hawks — and their allies in the NCRI — who urged a tougher stance against Tehran at the time.

In particular, Parsi points to the fact that the legal defense of Seyyed Hassan Daioleslam, the man NIAC sued for defamation, was spearheaded by an organization led by Daniel Pipes, a hawkish critic of radical Islam. Pipes wrote in a blog post that his Middle East Forum’s legal initiative took on the case without his knowledge.

The firm chosen to represent Daioleslam? Legal giant Sidley Austin, which just so happens to have been the US lawyer for arch-Iran foe Israel since 1992. NIAC failed to prove Daioleslam was acting out of malice and lost the case, even though the veracity of his claims was not established.

While Parsi and NIAC have built close ties to the Obama administration throughout the Iran deal negotiations, the NCRI and its allies have focused their attention on Congress. An umbrella organization, the NCRI successfully lobbied to get its principal member, the People’s Mujahedeen of Iran (Mujahedeen-e-Khalq, or MEK), off the US terrorist list in 2012.

The group has raised eyebrows for reportedly spending millions of dollars to get former US officials and lawmakers to speak on its behalf. The NCRI says it has the support of thousands of Iranians around the world who believe the group’s leader, Maryam Rajavi, should be the rightful leader of Iran; its critics say the group is little more than a cult with very little popular support inside Iran after it aligned itself with Saddam Hussein during the 1980s war with Iraq.

The NCRI and the OIAC hired three former US lawmakers at two different lobby firms in 2013 to press for the relocation of MEK members from Camp Liberty near Baghdad, where they live as unwanted — and regularly targeted — refugees following the fall of their former patron. Congress has repeatedly expressed support for their safe relocation, and the Obama administration has helped several dozen move to Albania and other countries.

The groups have also sought to build support for Rajavi’s claim that the NCRI is the legitimate government of Iran. The OIAC notably spent just shy of $100,000 over the past three years sending six House members and five staffers of both parties to the NCRI’s annual rally in Paris, according to the for-profit congressional data aggregator Legistorm, and helped put together a special section of the conservative Washington Times newspaper in conjunction with this year’s rally.

“As you boldly call for democracy and human rights in Iran, the American people stand with you in your fight against violence, oppression and terrorism in Iran,” House Foreign Affairs Chairman Ed Royce, R-Calif., wrote in the Times. “Your display of unity is an inspiration to our nation and its people, who like you, sacrifice blood and treasure in pursuit of freedom.”

The investment helped Rajavi briefly grab the Washington spotlight last April when the House Foreign Affairs terrorism subcommittee invited her to testify on the Islamic State, to the consternation of the other witnesses on the panel. Subcommittee Chairman Ted Poe, R-Texas, attended her Paris rally on the OIAC’s dime in both 2013 and 2014, Legistorm records show.

Editor's note: This story was updated with comment from Daniel Pipes.