The Iranian dissident group's leader told lawmakers that Tehran's mullahs are an inspiration for Islamists everywhere. 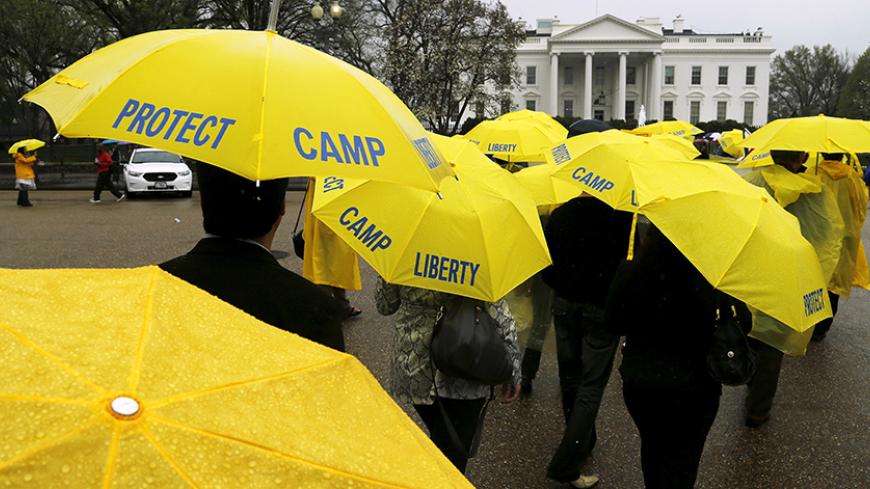 WASHINGTON — MEK leader Maryam Rajavi told lawmakers on April 29 that the path to defeating the Islamic State (IS) runs through regime change in Tehran.

Testifying by teleconference from the exiled group's headquarters in Paris, Rajavi urged the United States to stand up to Iran throughout the region. Her appearance has sparked controversy because the MEK was listed as a terrorist group until 2012, but several lawmakers defended her right to testify and held up her organization as a viable democratic alternative to the mullahs.

"Since [1979], the regime in Tehran has acted as the driving force for, and the epicenter of, this ominous phenomenon regionally and worldwide," Rajavi testified before the House Foreign Affairs Committee's panel on Terrorism, Nonproliferation and Trade. "The ultimate solution to this problem is regime change by the Iranian people and resistance."

The hearing drew a crowd of MEK supporters, including a who's who of lawmakers who have long supported — and taken money from — the MEK and its Iranian-American affiliates. They include Reps. Judy Chu, D-Calif., and Sheila Jackson Lee, D-Texas, who aren't on the committee but stopped by to praise Rajavi.

"This is a very historic hearing," said Jackson Lee, who along with panel Chairman Ted Poe, R-Texas, actively pressed the State Department to take the MEK off its terrorism list. "This is one of the few times that the voice of the opposition [to] the government of Iran has been part of an official discussion. And that's very important for the American people."

Other lawmakers, including ranking member William Keating, D-Mass., ignored Rajavi and directed their questions only at the other witnesses. Rep. Danny Davis, D-Ill., who also isn't a committee member, was the only one to challenge her to explain why the United States should put its trust in a group that was kicked out of Iran in the early 1980s and fought alongside Saddam Hussein against Tehran.

"Over the past 30 years, the United States has been drawn into some serious diplomatic and military dead-ends in the Mideast by mistakenly backing individuals and organizations claiming popular support, which turned out to be exaggerated and somewhat manufactured," Davis told Rajavi. "Would you please tell us about the role of the [MEK] ... and its place in the current Iranian political life?"

Rajavi said it was impossible to gauge support for the MEK because the mullahs would never allow free and fair elections. But she said the regime's "fear" of the group and its efforts at "demonizing" was a strong indication of the MEK's "strength."

Freshman Rep. Lee Zeldin, R-N.Y., left little doubt that he believed in her.

"I honestly do not know if my president is on the same exact team that I am," he told Rajavi. "Because there are individuals like you, who are willing to rise up and take control of your country's future."

Rep. Brad Sherman, D-Calif., said the MEK's terrorism designation belonged in the past and compared Rajavi's appearance to Japanese Prime Minister Shinzo Abe's address to Congress earlier in the day. He said the media had "attacked" the MEK's inclusion in the hearing because she was advocating for a certain policy — namely, regime change — but argued that most if not all other witnesses do the same.

Other witnesses, however, took a much different view, arguing that Rajavi's testimony detracted from the fight against IS. Former State Department counterterrorism coordinator Daniel Benjamin pulled out of the panel after finding out that Rajavi was testifying, and former Ambassador to Syria Robert Ford demanded to be seated on a separate panel.

"I wanted to have an in-depth discussion of the Islamic State in great detail, because, precisely, we have American servicemen and women in harm's way," Ford told reporters after leaving the hearing before Rajavi's appearance. "It's really important to get the strategy right. And that requires a detailed discussion."