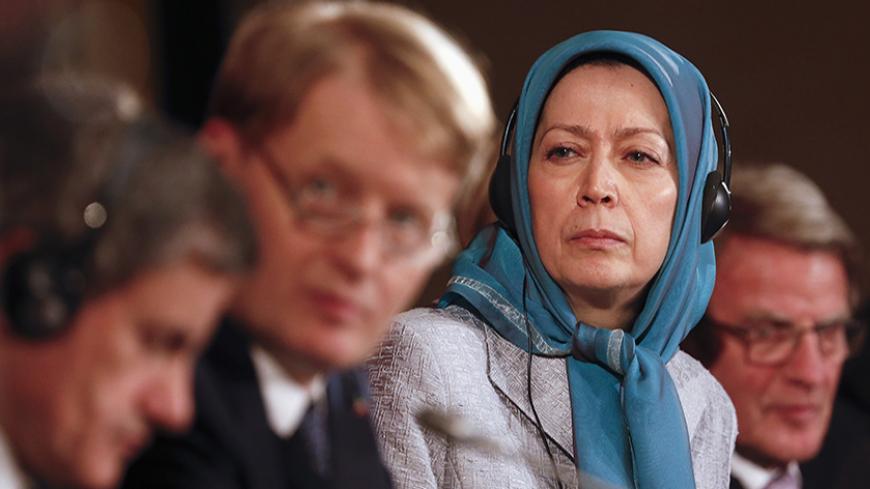 A House panel's invitation to the leader of an Iranian dissident group has caused a furious backlash from former State Department officials who refuse to testify along with her.

Former ambassador to Syria Robert Ford and ex-counterterrorism coordinator Daniel Benjamin told Al-Monitor that they did not want to give a platform to the Mujahedeen-e-Khalq (MEK), a group that the United States considered a terrorist organization until three years ago. Ford said he would not testify at the same time as Maryam Rajavi, while Benjamin has pulled out altogether from Wednesday's terrorism subcommittee hearing on the self-proclaimed Islamic State (IS).

"The committee handled this abysmally," Ford told Al-Monitor in a phone call late Monday. "What the fuck do the MEK know about the Islamic State?"

Ford said he got the committee to agree to host Rajavi on a second panel after other witnesses testify as a condition for his participation. She is set to appear via teleconference from Paris, where the National Council of Resistance of Iran (NCRI), an umbrella group of Iranian opposition groups that includes the MEK, has its headquarters in exile.

Benjamin, who helped delist the MEK while serving as coordinator for counterterrorism in 2009-12 under Secretary of State Hillary Clinton, called the invitation from panel chairman Ted Poe, R-Texas, "disgraceful." The MEK is widely believed to have been added to the terrorism list under President Bill Clinton as a goodwill gesture to reinforce the relatively moderate presidency of Mohammad Khatami, and the NCRI has since spent millions of dollars lobbying to get it delisted and boost its standing on Capitol Hill.

Benjamin told committee staff that he "did not believe the MEK had anything to contribute to a discussion of [IS], and that this would be a distraction from an important issue," he told Al-Monitor. "I said the story of the day would be the rehabilitation of the MEK, and I did not want to be associated with that in any way."

Poe has defended his invitation to Rajavi, which Al-Monitor first reported last week, saying hundreds of MEK members who remain at Camp Liberty in Baghdad could be at risk of being massacred by IS militants. Proponents of regime change in Iran have applauded the invitation, calling Rajavi and the NCRI a viable, democratic alternative to both Sunni and Shiite Islamists.

"Is Maryam Rajavi the right person to testify?" asked Raymond Tanter, who served on the National Security Council under President Ronald Reagan, at the conservative website Townhall.com. "She is the right person: As a pro-democracy woman with a moderate view of Islam, Rajavi represents the opposite of the misogynous Iranian regime’s rulers; they are authoritarian, suppress women and hold an extreme view of Islam."

The MEK did not respond to a request for comment.

Its defenders say the decades-old allegations against the group are misinformed and rely excessively on propaganda from Tehran.

"Now freed from the restrictions and stigma of [the terrorist] designation, the MEK's members and supporters will have the opportunity to contest not only the factual record but assessments dismissive of the group's political potential," Lincoln Bloomfield, a former State and Defense Department official, wrote in a 2013 book about the MEK. "Their first and obvious point will be that no one knows how Iranians would vote in a free and open election."

Bloomfield and other MEK defenders argue that MEK attacks against Iranian targets were a form of legitimate armed resistance against a religious dictatorship, and that the killings of a half-dozen American citizens inside Iran in the 1970s were carried out by factions with no connection to the current leadership. They point out that support for the MEK within Iran is impossible to gauge since advocating on its behalf is punishable by death.

The group's detractors, of which there are many among current and former State Department officials, think banking on the MEK is delusional. They say the MEK is little more than a Rajavi cult and that supporting it publicly undermines pro-democracy activists within Iran.

"Although I participated in and supported the decision to delist the MEK as a Foreign Terrorist Organization — in part because of real humanitarian concerns about the plight of its members in Iraq — I continue to have serious concerns about the group," Benjamin told Al-Monitor in an email. "No one can seriously dispute that the MEK has plenty of American blood on its hands. In addition to killing US civilians and military personnel, participating in the 1979 takeover of the US Embassy in Tehran and serving as a strike force for Saddam Hussein, the group treats its own member abysmally and coercively."

Barbara Slavin contributed to this report