The US removed a controversial Iranian opposition group from its list of terrorist organizations, Barbara Slavin and Laura Rozen report for Al-Monitor, after most of its members decamped from their base near Baghdad. The move does not mean the US condones the Mujahedin-e-Khalq, which has assassinated Americans and Iranians. 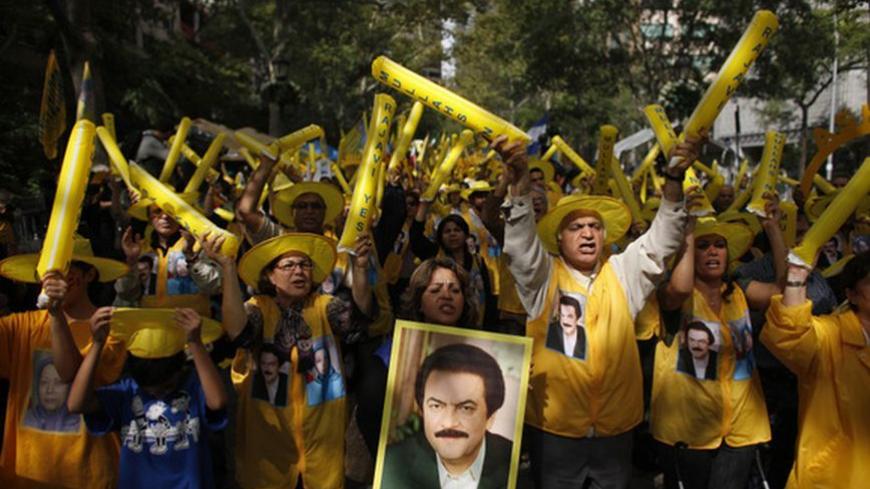 A woman holds a picture of Iranian resistance leader Massoud Rajavi as supporters of the main Iranian opposition, the Mujahedin-e Khalq, protest against Iranian President Mahmoud Ahmadinejad's visit to the UN outside the UN headquarters in New York on Sept. 22, 2011. - REUTERS/Eduardo Munoz

Secretary of State Hillary Clinton has decided to take a controversial Iranian opposition group, the Mujahedin-e-Khalq (MEK), off the State Department’s list of terrorist organizations as compensation for the group’s almost complete evacuation of its historic base in Iraq, a US official told Al-Monitor on Friday.

The official, speaking to Al-Monitor on condition of anonymity, said the decision — first reported by CNN’s Elise Labott — reflected the fact that all but 200 MEK members have now relocated from Camp Ashraf north of Baghdad to a facility near Baghdad airport, where they will be processed for resettlement out of Iraq by the UN High Commissioner for Refugees.

Iraq’s pro-Iranian Shiite government has insisted for years that the MEK — a once militant group that lost out in the post-1979 revolution struggle for power in Iran — vacate the camp that had been its base since the mid-1980s. Only by holding out the prospect of delisting, however, was the Barack Obama administration able to convince more than 3,000 members of the group to leave in several batches this year.

Clinton Friday notified Congress that she would be delisting the MEK in time to meet an Oct. 1 deadline set by a US court.

Beyond “the MEK’s cooperation in closing Ashraf,” the official said, the State Department determination reflected “a review of the actual record,” which showed that the group has not been responsible for acts of terrorism in recent years.

Ashraf has been under US or Iraqi supervision since the US overthrew Saddam Hussein’s regime in 2003. At least until the late 1990s, the MEK used to send operatives into Iran to kill Iranian officials. The MEK is widely detested in Iran because it took Saddam’s side against Iran during the 1980-88 Iran-Iraq war.

The US official added that taking the MEK off the terrorist list would not connote US government approval. Responsible for the deaths of half a dozen Americans in the 1970s and for killing hundreds of Iranians after 1979, the MEK is widely regarded as a cult that demands that its followers stay celibate and obey the commands of Mariam Rajavi, the wife of MEK leader Massoud Rajavi, whose whereabouts are unknown. Mariam Rajavi lives outside Paris.

The US official said he had “no idea” whether Massoud Rajavi was still at Ashraf, as has been rumored. Under an agreement brokered by the UN representative in Iraq, Martin Kobler, 200 MEK members can stay at the camp until the end of September, at which point 100 will be allowed to remain to look after MEK property, the US official said.

The MEK has paid large sums of money to former US officials including former New York City mayor Rudy Guliani and former Pennsylvania Governor Ed Rendell to lobby on its behalf. The US Justice Department had been looking into charges that Rendell and others illegally accepted money from a terrorist organization, but those cases are likely to be dropped once the MEK is delisted.

Iranian officials are likely to be furious at the move, which could negatively impact already stalled nuclear negotiations.

Raymond Tanter, a former National Security Council official under the Reagan administration, told Al-Monitor on Friday that the Iranian government “will assume that regime change is more on the table than it has ever been.”

The National Iranian American Council (NIAC), a group that has opposed delisting the organization, warned that the decision “opens the door to Congressional funding of the MEK to conduct terrorist attacks in Iran, makes war with Iran far more likely, and will seriously damage Iran’s peaceful pro-democracy movement as well as America’s standing among ordinary Iranians.

"The biggest winner today is the Iranian regime, which has claimed for a long time that the US is out to destroy Iran and is the enemy of the Iranian people,” wrote NIAC Policy Director Jamal Abdi.

The Iranian mission to the United Nations had no immediate comment on the reports, which come on the eve of the annual UN General Assembly meeting. Iranian President Mahmoud Ahmadinejad is scheduled to address the UN on Wednesday and is also due to meet with US journalists and Iran experts while in New York.

Philip Zelikow, who dealt with the issue as counselor to then Secretary of State Condoleezza Rice, told Al-Monitor, “From what I can learn, I don't see any basis for keeping the MEK on the FTO [Foreign Terrorist Organization] list and thus obstructing the resettlement, outside of Iraq, of the Ashraf folks as refugees. My advice is also unwelcome to the MEK supporters since I've told them bluntly that the US can no longer protect them in Iraq and that they should accept resettlement outside of Iraq.”

“I am relieved to see that, thanks to some able US diplomatic work, we seem to have found a solution,” Zelikow added. “Fortunately I've turned my attention to other matters in the last year, but am glad to see this one is in a somewhat better place.”

Barbara Slavin is Washington correspondent for Al-Monitor and a senior fellow at the Atlantic Council, where she focuses on Iran. She tweets at BarbaraSlavin1. Laura Rozen writes the Back Channel news blog for Al-Monitor. She previously served as senior foreign-policy reporter for Politico and Yahoo News, and wrote the “Cable” blog for Foreign Policy magazine. She is based in Washington, D.C. You can follow her on Twitter at @lrozen.