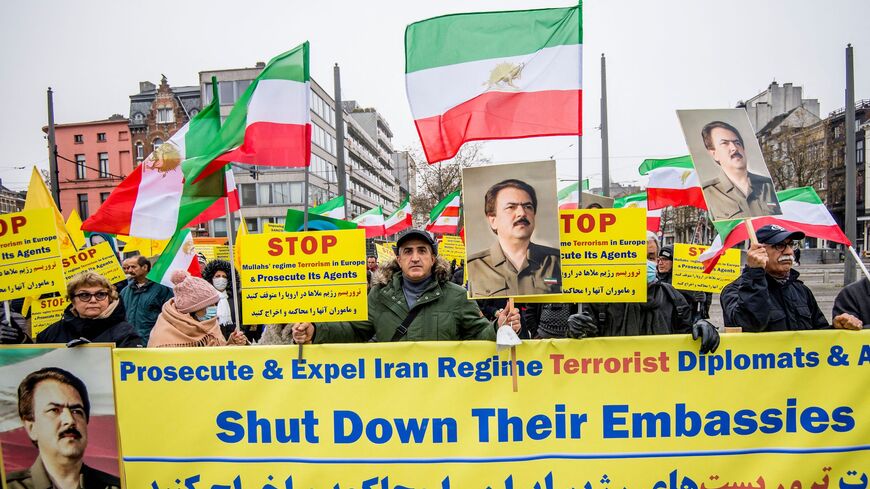 Protesters wave the former flag of Iran and hold portraits of Iranian resistance leader Massoud Rajavi as they take part in a protest action during a session of the trial of four persons accused of planning an attack in France in 2018, outside the Antwerp court of appeal on Nov. 17, 2021. - JASPER JACOBS/Belga/AFP via Getty Images

State TV in Iran acknowledged a brief hack of its channels on Thursday that appeared to be the work of an exiled dissident group in the run-up to the anniversary of Iran’s 1979 revolution.

“During a period of 10 seconds, the faces and voices of hypocrites appeared on Channel One,” IRIB said, adding that the incident was under investigation.

The Associated Press described the apparent hack as showing MEK leader Massoud Rajavi and his wife Maryam Rajavi, who leads the group's political wing. A man’s voice could be heard chanting “Salute to Rajavi, death to Khamenei.”

Iran considers the Albania-based MEK a terrorist group, as did the United States until 2012.

The MEK has not claimed responsibility for the incident. A Paris-based spokesperson for the group, Shain Gobadi, told AP, “We, like you, were just informed about the issue.”

“It appears that it was done by supporters of the MEK and resistance units within the regime’s radio and television stations,” he said.

The hack comes as Iran gears up to celebrate the 43rd anniversary of the 1979 Islamic Revolution that toppled the American-backed shah, Mohammad Reza Pahlavi. The MEK took part in the revolution that brought Ayatollah Ruhollah Khomeini to power, but was later forced into exile in Iraq, where the Marxist-leaning group backed Saddam Hussein’s war against Iran.