The group, once on a State Department list of terrorist organizations, has influential supporters in the Donald Trump administration. 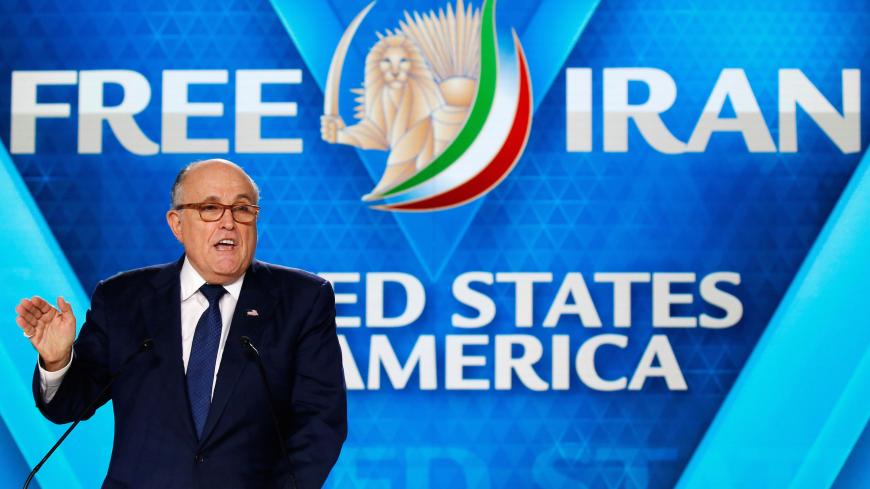 US administration talking points no longer exclude the Mujaheddin-e Khalq (MEK) as a potential replacement for the government of the Islamic Republic of Iran, Al-Monitor has learned.

Removed from a State Department list of terrorist organizations in 2012 after an expensive lobbying campaign, the MEK is understood to be widely reviled inside Iran as a leftist Islamist cult that sided with Saddam Hussein during the 1980-88 Iran-Iraq war. The group advocates the overthrow of the Iranian government and the elevation of Maryam Rajavi, the wife of MEK founder Massoud Rajavi, as the new leader. She lives in exile outside Paris.

Top officials close to the Donald Trump administration — including national security adviser John Bolton and Rudolph Giuliani, the president’s personal lawyer — have taken tens of thousands of dollars in fees from the MEK and its front organizations over the years to speak before rallies that promote Maryam Rajavi’s leadership ambitions. Just last month, Giuliani told a pro-MEK rally in Warsaw, Poland, on the sidelines of a US-organized Middle East conference that Iran’s leaders are “assassins” and “murderers” who should be overthrown and then replaced by Rajavi.

In the past, State Department talking points have said that the United States believes that the MEK is not a viable political alternative for Iran. But that line was changed just before the Warsaw conference last month.

“We have said in the past, and say it now, that the Mujahideen Organization has no place among the people of Iran,” State Department spokeswoman Elizabeth Stickney told Deutsche Welle’s Persian-language channel as recently as September.

Asked this week if the MEK is now on a list of acceptable alternatives to the current government in Iran, a State Department spokesperson would not rule it out.

"We support the Iranian people. We have had many opportunities to engage the large and vibrant Iranian diaspora to hear many diverse views about the future of Iran,” the spokesperson told Al-Monitor. “As President Trump has clearly stated, the United States wants to see a free and prosperous future for the people of Iran. We do not back any specific Iranian opposition group; rather we back the Iranian people as they struggle to secure the freedoms and dignity they deserve."

Officially, the Trump administration insists that its policy on Iran — quitting the nuclear deal last year and reinstating harsh sanctions — is meant to compel the Iranian government to change its policies, particularly on regional intervention. But the hawkish views of individuals such as Bolton and the rhetoric used by Secretary of State Mike Pompeo indicate that the real goal for many in the US administration is regime change.

On the 40th anniversary of the Iranian revolution, Bolton tweeted a harsh video message to the Supreme Leader of Iran, Ayatollah Ali Khamenei, telling him, “I don’t think you’ll have many more anniversaries to enjoy.” Pompeo has chastised European governments for seeking to salvage the 2015 nuclear deal despite continued Iranian compliance, as has Vice President Mike Pence.

Newt Gingrich, a veteran Republican politician who is close to the Trump administration, sought guidance from the Justice Department last year about whether he needed to register as a lobbyist for a “foreign political party” that appears to be the France-based National Council of Resistance of Iran (NCRI), the name for the MEK’s political front. In January, the NCRI hired Robert Joseph, a former undersecretary of state for arms control and international security, to lobby for it for $15,000 a month. Joseph replaced Bolton at the State Department under the George W. Bush administration.

The MEK, whose name in Farsi means People’s Holy Warriors, came into existence as a guerrilla group that sought the overthrow of the US-backed shah, Mohammad Reza Pahlavi. It was responsible for numerous acts of violence, including the assassination of six Americans in the 1970s, and supported the 1979 revolution. The group broke with the Iranian government after the revolution when it lost out in a struggle for power to supporters of Ayatollah Ruhollah Khomeini. Massoud Rajavi fled first to Paris and then to Iraq, where Saddam Hussein gave the group refuge. The MEK fought against Iran during the Iran-Iraq war, earning the enduring enmity of most Iranians. The government executed thousands of jailed followers of the MEK in 1988 after members of the group in Iraq entered the country following Iran’s acceptance of a UN cease-fire.

Over the years, the MEK has paid tens of thousands of dollars in speaking fees to former US officials from both the Republican and Democratic parties. Its sources of funding are a mystery. In the current environment, the group clearly sees an opportunity to find favor among those hoping that sanctions will weaken and destabilize the government in Tehran.

Some backers of regime change, particularly in the Iranian diaspora, have looked toward the son of the late Shah as a more plausible substitute for the Iran’s theocratic government. However, Reza Pahlavi made clear at an appearance late last year at the Washington Institute for Near East Policy that he doesn’t see himself as a replacement for the current Iranian leadership but simply someone who could play a “guiding” role after that regime’s fall. He spoke today at the conservative American Enterprise Institute.

At the Washington Institute, Pahlavi also appeared to reject any role in a post-Islamic Republic Iran for the MEK. “The continuing problem we have, or you can see with the MEK, is that they have yet to agree to work with democratic forces,” he said. “Maybe it’s because by doing so they’ll lose the integrity and control of their structure.”