Prince Turki bin Faisal Al Saud’s attendance at the annual meeting of the People’s Mujahedeen of Iran has angered Iranian officials and media. 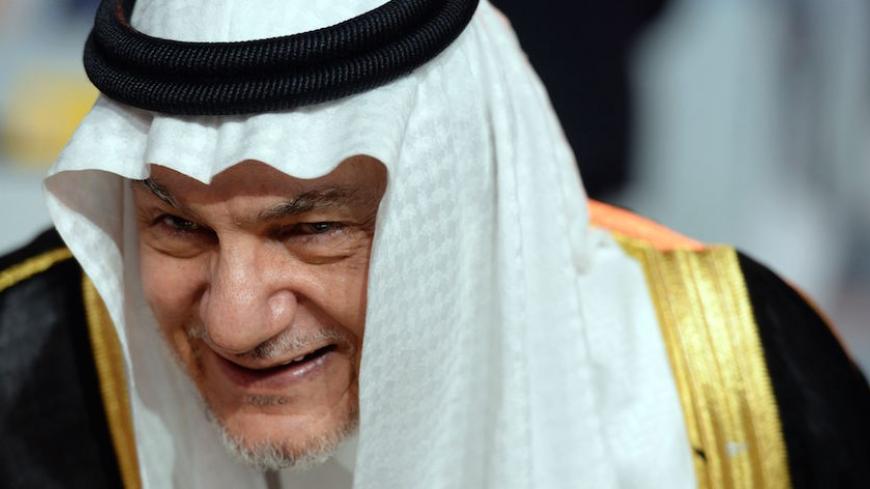 The attendance of Prince Turki bin Faisal Al Saud at the July 9 rally backed by the Iranian opposition group People’s Mujahedeen of Iran (MEK, or Mujahedeen-e-Khalq) has angered many Iranian officials and media. The rally in Paris is typically condemned by Iran, given the group's history of carrying out attacks against the Islamic Republic. However, the attendance and speech of Faisal, who is part of the Saudi royal family and was head of Saudi intelligence for over two decades, has brought charges by Iranian officials of Saudi material support for terrorism against Iran.

The presence of Faisal “shows the longstanding link” between Saudi Arabia and the MEK, said Ramazan Sharif, the head of public relations for the Islamic Revolutionary Guard Corps (IRGC). Hossein Amir-Abdollahian, former deputy foreign minister for Arab and African Affairs, said of Faisal’s comments' supporting the MEK in the overthrow of the Islamic Republic: “These statements confirm that Saudi Arabia’s widespread financial and security support for terrorism has always been the agenda of Riyadh.” Many Iranians have often wondered how the MEK could afford to pay exorbitant sums, ranging from $20,000 to $100,000 for a single appearance, to former US officials to speak on its behalf.

Mohsen Rezaei, IRGC commander during the Iran-Iraq War and current secretary of the Expediency Council, accused Saudi Arabia of being responsible for the attacks by the MEK and also accused the Gulf country of supporting recent attacks by Kurdish groups against Iran’s security forces.

Conservative Iranian media likened Faisal’s appearance to former Iraqi President Saddam Hussein’s support of the MEK. An article in the IRGC-affiliated newspaper Javan was headlined, “Saudi in the direction of Saddam.” A Mashregh News article was headlined, “The hypocrites yesterday with Saddam, today with Wahhabi Saudis.” Iranian media and officials often refer to the MEK with the religiously charged term “hypocrites.”

Mashregh News also criticized Iran’s Foreign Ministry, particularly Foreign Minister Mohammad Javad Zarif, for not condemning the meeting between Faisal and the MEK. The article accused the Hassan Rouhani administration of pursuing a weak foreign policy with respect to Saudi Arabia that has only emboldened the kingdom. The article said that even sidelining Amir-Abdollahian will not stop Saudi enmity toward Iran. Conservatives have speculated that Zarif replaced Amir-Abdollahian in June in a conciliatory gesture toward Saudi Arabia. The article said Zarif's and the Foreign Ministry’s silence with respect to Faisal meeting with the MEK “is a mystery for the Iranian people.”

Perhaps the most interesting aspect of Faisal’s speech is his reference to the “late” Massoud Rajavi, the leader of the MEK. Rajavi's wife, Maryam, has been the public face of the MEK since the 2003 US invasion of Iraq. Some have speculated that Massoud fled into hiding after the invasion or died in the invasion. The front page of Reformist Shargh Daily covered the topic with a cartoon image of Faisal lifting a casket containing Massoud Rajavi’s body with the headline, “The death announcement of a dead person.” In response to Faisal’s comments about the “late” Massoud Rajavi, the MEK continued to deny Massoud’s death. Shahin Ghobadi, spokesman for the MEK, said Faisal’s comments were “misinterpreted.” In the audio, however, Faisal refers on two different occasions to Massoud as “marhoom,” which means “late” in both Arabic and Persian.

The MEK has existed as an Islamist-Marxist group since 1965, when it fought against the government of Mohammad Reza Pahlavi. It carried out a number of attacks against US soldiers stationed in Iran and years later it was put on the US State Department terrorist list. After the 1979 Islamic Revolution, the MEK lost power to Ayatollah Ruhollah Khomeini and in response resorted to bombings and assassinations. Iran accuses the group of being responsible for 17,000 deaths. The MEK’s most devastating bombing was the 1981 blast at the Islamic Republic headquarters building that killed over 70 people, including Ayatollah Mohammad Beheshti, who was believed to be the second-most influential figure in Iran at the time after Khomeini.

The MEK took refuge in Iraq and in the final year of the Iran-Iraq War in 1988 launched an unsuccessful military attack against Iran, resulting in thousands of MEK deaths. Thousands of alleged MEK supporters in Iranian prisons are believed to have been executed in response. The group, while at one time a popular revolutionary force, is now accused of being a cult-like operation run by Maryam Rajavi.