Were Saudis behind Abbas-MEK meeting?

A meeting between Palestinian President Mahmoud Abbas and Mujahedeen-e-Khalq leader Maryam Rajavi in Paris has sparked both Iranian and Palestinian suspicion about Saudi Arabia's ties to the Palestinian Authority. 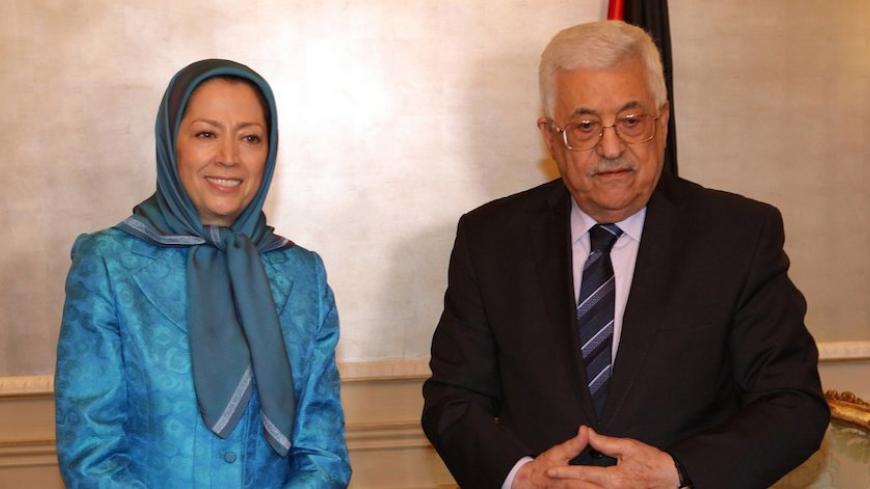 According to the MEK, the meeting took place to discuss fighting fundamentalism and terrorism in the region. Iran, which accuses the MEK of being behind assassinations and bombings resulting in the deaths of thousands over the last 37 years, criticized the meeting. “[Abbas'] problem is that he does not focus on pursuing the rights of the Palestinian people,” said Hossein Amir-Abdollahian, the former deputy foreign minister for Arab and African affairs and current foreign policy adviser to parliament Speaker Ali Larijani. He called the meeting “support for terrorism” and said that it will neither weaken Israel nor liberate Jerusalem. Hossein Sheikholeslam, an adviser for the Iranian Foreign Ministry, said that the MEK is supported by the United States, Israel and Saudi Arabia and called Abbas a “puppet of America.”

Iran is one of the main sponsors of the Palestinian Authority’s (PA) rivals for power in the West Bank and the Gaza Strip. According to Fars News Agency, a coalition of Palestinian groups condemned Abbas’ meeting. A statement by the group read that the meeting can only hurt relations between Palestinian groups and Iran, which has helped Palestinian resistance groups more than Arab countries have since the 1979 revolution. The statement viewed Abbas’ meeting as being in line with Saudi policies in the region, and given the recent closeness between Saudi Arabia and Israel, “the negative consequences of this action will be a hundred fold.” Ten Palestinian groups, most notably the Palestinian Islamic Jihad, which has close ties to Iran, signed the statement.

A number of Iranian analysts viewed the meeting as an extension of the Saudi-Iranian regional rivalry. An article in Mehr News concluded that the meeting was the result of either pressure applied by Saudi Arabia or Abbas’ “welcoming dance for Riyadh” to strengthen ties between Saudi and the PA. Despite Iran’s support for resistance groups in Palestine, the article continued, Iran has never taken an official position against the PA. In fact, the leaders of the Islamic Republic closed the Israeli Embassy after the 1979 revolution and handed it over to a Palestinian delegation led by PLO leader Yasser Arafat. In the face of regional and international pressure, reported the Mehr article, Iran has supported Palestinian groups as one of the goals of the revolution.

In an article for BBC Persian, Mehrdad Farahmand wrote that some politicians meet with MEK members and take pictures with their leaders, but have little knowledge of their background. However, given Abbas’ history of political activity, he could not be unaware of MEK’s own history. Farahmand wrote that before the 1979 revolution, MEK fighters had trained in Lebanon with Fatah, the political party that Abbas now leads. The two groups had also reportedly fought together with Iraqi troops during the Iran-Iraq War. Regarding the meeting, he found, given Faisal’s attendance at the MEK rally and the Saudi media’s wide coverage and support of the Paris event, it is natural to assume that they are investing in groups opposed to Iran.