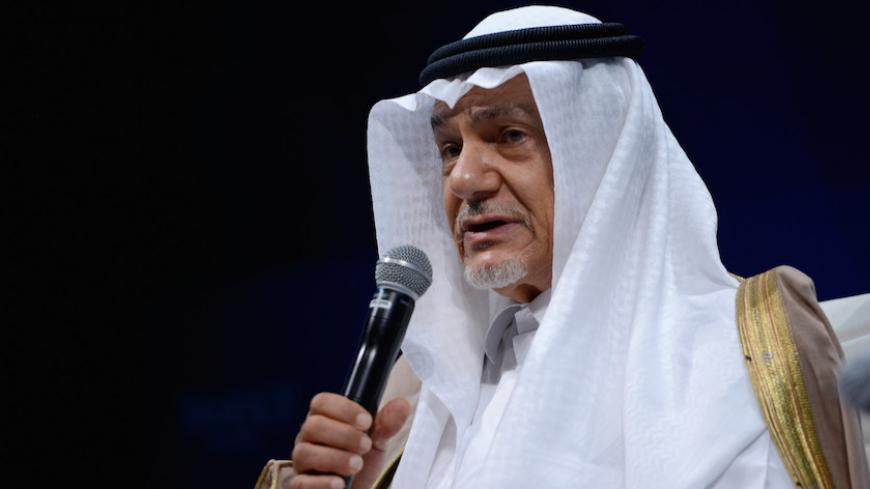 TEHRAN, Iran — Just as the Iranian judiciary was preparing to put those who stormed the Saudi Embassy in Tehran earlier this year on trial, former Saudi intelligence chief and diplomat Prince Turki al-Faisal Al Saud appeared to step up the campaign against Iran by appearing at the July 9 annual conference of the exiled Iranian opposition group Mujahedeen-e-Khalq (MEK) in Paris.

Iran has listed the MEK as a terrorist organization since the 1980s, blaming it for the deaths of over 12,000 Iranians, including civilians, politicians — and in recent years — nuclear scientists. The MEK notably fought on the side of former Iraqi dictator Saddam Hussein during the Iran-Iraq War (1980-88), and also later helped Saddam suppress an uprising by Iraqi Shiites and Kurds.

At his 30-minute speech in Paris, Faisal expressed admiration for the “people of Iran,” while lambasting the Islamic Republic and particularly its late founder Ayatollah Ruhollah Khomeini. Indeed, he accused Khomeini of trying to “export” the Islamic Revolution.

Iran’s Foreign Ministry spared no time in reacting to Faisal’s appearance at the MEK gathering, not to mention his remarks. What seemed to have infuriated the Iranians the most was that he repeated the crowd’s chants — in Arabic — of the popular Arab Spring slogan “The people want the fall of the regime.”

One anonymous source at the Iranian Foreign Ministry told the Tehran Times on July 10 that Faisal’s statements showed Saudi Arabia’s “stupidity, indecency and political frustration.” Other Iranian officials have referred to the former Saudi spy chief’s remarks as further proof of Riyadh’s “support for terrorism.”

In an interview with Fars News Agency on July 10, Hossein Amir-Abdollahian, who until recently served as deputy foreign minister for Arab and African affairs, said that he had previously told the Saudis that “it is impossible to use terrorists as a tool to make the region insecure and at the same time expect calm within the kingdom.”

Al-Monitor asked Seyed Mohammad Houshisadat, a professor of political science at Tehran University and visiting researcher at the Center for Scientific Research and Middle East Strategic Studies, whether Faisal was voicing his own views or Riyadh’s official stance.

Houshisadat said, “Prince Faisal is an influential figure from the conservative branch of the Saudi ruling family. He was the director of the General Intelligence Directorate for 23 years and served as ambassador to the United Kingdom and the United States. His role and key positions leave no doubt that those remarks are Saudi Arabia’s official line. Therefore Iranian authorities and the Islamic Revolutionary Guard Corps see his speech in the framework of the kingdom’s policy vis-a-vis Iran.”

Houshisadat added, “The Saudis have been seeking to topple the Islamic Republic since 1979; they backed Saddam Hussein in the war with Iran despite having grave ideological differences with him. Their relationship with the MEK dates back to the 1980s. However, the events over the past two years and the increased Iranian influence in the Middle East prompted them to drop the ambiguity and pursue the policy of regime change in Iran with more transparency.”

When asked about the recent remark by Ali Younesi, the presidential aide for ethnic and religious minorities affairs, that Riyadh is making the same mistake Saddam made when he used the MEK in his war against Iran, Houshisadat replied, “The Saudis are trying to revive threats … by activating several opposition groups, including the MEK, or Kurdish militants in Iraq’s semi-autonomous Kurdistan Region and Baluch militants in Pakistan’s Baluchistan province. In the long run, this policy will backfire — as it did for Saddam Hussein — but for the time being, the MEK has turned into Saudi Arabia’s instrument to bash Iran.”

Al-Monitor also asked Houshisadat what Tehran’s response might be to Faisal’s call for regime change in Iran. He said, “There are two camps in Iran: One promotes direct confrontation with Saudi Arabia and the second camp favors dialogue. Iranian policymakers have always sought to de-escalate tensions and negotiate with Saudi Arabia. Considering that fact, Tehran will not confront Riyadh directly because it knows only too well that the region cannot stand another war — this time between its two powerhouses. Besides that, the current world order would not support an all-out war that would endanger Western financial and political investments in the Middle East and divide it along two hostile lines.“

Husseini, who is one of the founders of the popular Arabic news channel Al-Mayadeen, similarly dismissed the possibility of war between the Kingdom of Saudi Arabia and the Islamic Republic of Iran. However, he told Al-Monitor, “The United States and Israel are encouraging Saudi Arabia — and in fact would support it — if Riyadh launched a war against Iran.”

He added, “But Tehran is not walking into that trap and instead responds to the Israelis, the Americans and the Saudis on the ground in Syria and Iraq.” In this vein, Husseini predicted that “in the coming months, we will witness an escalation of regional violence and tensions related to Saudi Arabia’s aggressive attitude. Saudi Arabia is … using any means to put pressure on Iran.” However, he said that he doubts such a policy will achieve its desired results.

Most of all, Amir-Abdollahian perhaps expressed the most ominous concern, saying, “Saudi Arabia’s strategic mistake to employ terrorists will eventually cause irreversible losses not only to the kingdom but to all of us.”