Why Iran needs to fight Saudi Arabia to forge peace

Despite all the challenges it poses for Iran, Saudi Arabia’s regional policy and strategic behavior is still not perceived as a threat in Tehran — but could failing to respond be a mistake? 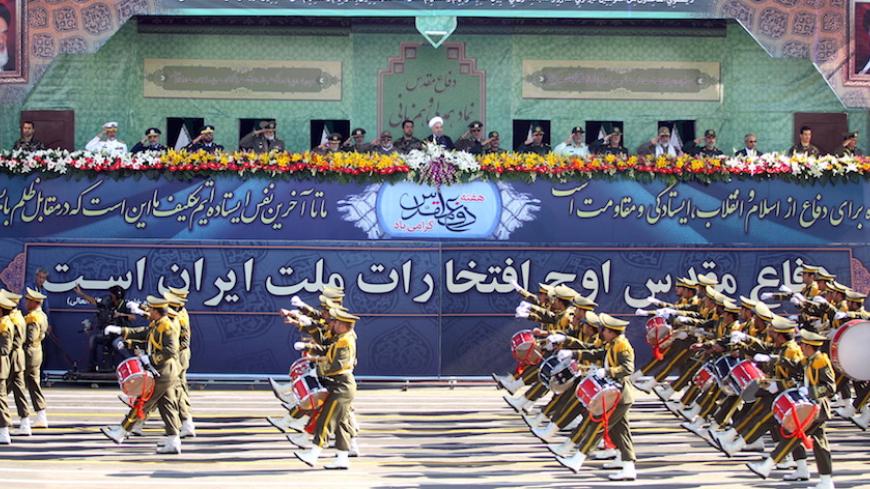 Members of the Iranian army march past President Hassan Rouhani (C top) and military commanders during a parade marking the anniversary of the Iran-Iraq War (1980-88), in Tehran, Sept. 22, 2015. - REUTERS/Raheb Homavandi/TIMA

Prior to Faisal’s statements at the MEK convention, the Saudi deputy crown prince, Mohammed bin Salman, paid a 10-day visit that started on June 14 to Washington and then Paris, during which he stressed the necessity to counter the "Iranian threat.” Meanwhile, as has been the norm during his tenure so far, Saudi Foreign Minister Adel al-Jubeir, who accompanied Mohammed, went even further in his criticism of Iran's regional policy, demanding that Tehran stop “exporting its revolution.”

This situation has in fact been prevalent ever since King Salman bin Abdul-Aziz Al Saud was crowned in January 2015. As such, one can assume that there has been a paradigm shift in Riyadh's regional policy, which encompasses relations with Tehran. At this point, Saudi Arabia has crossed so many unwritten rules in its dealings with Iran that some observers anticipate a war between the two nations.

Yet despite all these changes, there are no parallels in Iran’s policy toward Saudi Arabia. Even with reference to the abovementioned developments, Iran did not bother to reciprocate — at least in terms of the level of its reaction. The question as to why it did not react has two logical answers. The first would be that Iran accepts the Saudi accusation that it is the main source of instability and terror in the region. However, given internal debates on regional policy in Tehran, this assumption has no basis. The second possible answer is that Iranian elites do not perceive the Saudi moves against Iran as being of importance, in terms of their effect. This answer is more relevant in Iran’s internal debates.

In fact, Iranian elites tend to exclude Saudi Arabia from their list of perceived national security threats, even though Riyadh has ironically been the main source of threat against Iran during the past five turbulent years in the Middle East. Iranians have been witnessing aggressive acts on the part of Saudi Arabia in Iraq, Syria, Bahrain, Yemen and now even within Iran. Yet, Iranian elites still refrain from viewing Riyadh as a threat.

In the Iranian debate on Saudi Arabia’s regional policies, there have always been two viewpoints: The first and most prevalent one stresses the need for dialogue and diplomatic engagement with Riyadh as the best way to stop its hostile attitude toward Iran. Indeed, the majority within Iran’s diplomatic and political and even security apparatus hold this stance. The second and more marginal viewpoint takes Riyadh’s hostility as a threat and advocates the creation of an infrastructure to counter this threat. Notwithstanding its reasoning, this point of view has never made its way to foreign policy decision-making in Iran. Thus, Iran’s formal bureaucracy has never moved to perceive Riyadh as a threat and hence never dealt with it as such.

This perception stems from a tradition in Iran’s worldview that divides Middle Eastern states into independent and dependent ones. In the view of Iranian elites, at least in the 1980s and 1990s, Saudi Arabia was dependent and could not initiate nonaligned policies. According to this point of view, even the Saudi support for Iraq during the 1980-88 Iran-Iraq War was not an independently initiated Saudi policy. Thus, Saudi hostility toward Iran at that time was perceived as being somewhat beyond the will of the Saudi state. Even though this understanding of Saudi Arabia has changed in Iran during the past decade, Tehran’s approach toward Riyadh has not. As such, within the current framework of the Iranian understanding of Saudi Arabia, differences with Riyadh are seen as manageable via diplomacy. This was the case during the tenures of former Reformist President Mohammad Khatami (1997-2005) as well as Principlist President Mahmoud Ahmadinejad (2005-13), and has continued under incumbent President Hassan Rouhani since 2013, too.

Another reason why Tehran in the past did not consider Riyadh as a threat was the perception of the latter’s military as weak and security as fragile. In this reading, a country with limited military might is not considered as a direct threat. Accordingly, Riyadh was perceived as so vulnerable in terms of its military and security that it would be deterred from posing any sort of direct threat against Iran. In other words, the logic behind this perception was that the risk of putting oneself in jeopardy would pre-empt threats against others. Despite Saudi Arabia’s huge military expenditure over the past decade, this perception has not changed. Indeed, there have even been voices in Tehran who despise Riyadh for what they perceive of as the Saudis' purchasing arms that they cannot use.

Despite all the changes in Saudi foreign policy, Riyadh is still perceived in Tehran almost the same way it was a decade ago. Although the voices demanding a stronger stance and a revision in Iran’s policy toward Saudi Arabia are getting louder, it seems that Iranian elites, even if they feel a need for change, still stick to the previous policy of preferring diplomatic engagement to resolve differences to avoid yet more escalation with Saudi Arabia. Thus, the main objective in Tehran is to de-escalate the situation or at the very least stop any further escalation.

Hence, despite all the challenges it poses, Riyadh’s regional policy and strategic behavior is still not perceived as a threat in Tehran. At this point, the question is thus whether Iran’s approach to de-escalation will eventually backfire. Indeed, the Iranian perception of Saudi Arabia as not constituting a direct national security threat appears to be well understood in Riyadh and may even be part of Saudi decision-makers’ calculations in their dealings with Iran. As such, Saudi decision-makers may have latitude that their Iranian counterparts are lacking. Taking developments last year as an example, Riyadh appears to not have missed an opportunity to escalate things with Tehran, in the knowledge that the Iranians will not respond in kind.

Thus, Iran’s policy of seeking to not create another source of instability in the Middle East by avoiding counterescalation in its dealings with Saudi Arabia may, in fact, very well paradoxically constitute a threat to both regional stability and Iranian national security. By avoiding a shift in policy toward Saudi Arabia, Iran may be inviting Saudi escalation against both Tehran and its allies while at the same time tying its own hands in terms of its responses. In other words, current Iranian policy can best be characterized as an inverse security dilemma that may cause more trouble than it solves.