Iran’s UN Envoy: We Will Not Initiate Confrontation

EXCLUSIVE: Iran’s ambassador to the United Nations said that Iran will not "initiate any provocative steps" with the West despite the imposition of draconian sanctions, in a wide-ranging interview with Al-Monitor's ​Laura Rozen and Barbara Slavin. He also described recent nuclear talks as tentative and vague. Read more from the conversation. 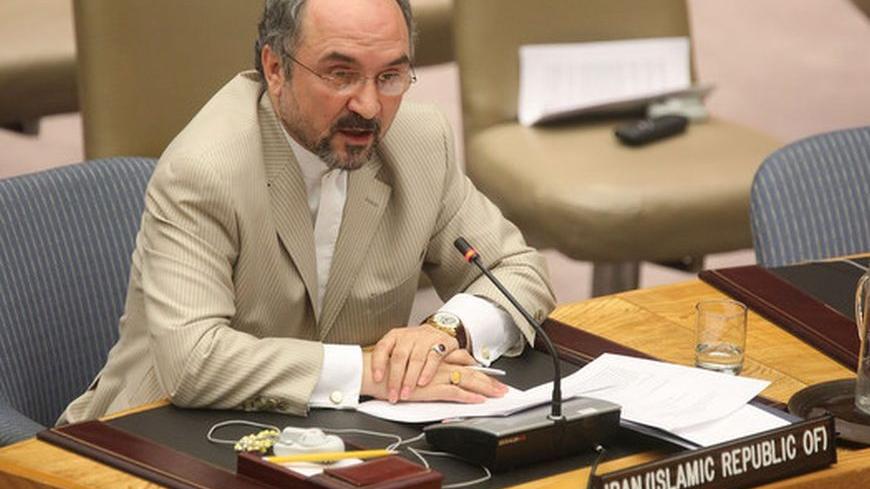 Iran’s ambassador to the United Nations Mohammad Khazaee said Tuesday (July 10) that Iran will not take actions that would escalate confrontation with the West and criticized the international proposal in nuclear negotiations as tentative and vague.

In an exclusive and wide-ranging interview with Al-Monitor at Iran’s UN mission in New York, Khazaee said Iran would not “initiate any provocative steps” such as undertaking higher level enrichment or closing the Strait of Hormuz, despite the imposition on July 1 of draconian new sanctions and little progress to date towards an agreement in talks with the five permanent members of the UN Security Council plus Germany.

Khazaee and other Iranian diplomats have embarked on something of a charm offensive in recent days, seeking to explain their position amid the continuing impasse. Negotiators from Iran and the P5+1 have held a series of high level meetings in Istanbul, Baghdad, and Moscow in recent months, followed by technical discussions among nuclear experts in Istanbul July 3. Deputy nuclear negotiators from Iran and the European Union are due to meet in Istanbul July 24. The Iranian mission to the UN gave Iran experts a copy of a summary of their position and rebuttal to P5+1 proposals last week. The document revealed a wide gap between the two sides.

On Tuesday, Khazaee said that it should be “possible to close the gap” to reach a compromise. But the Iranian envoy also mocked proposed inducements in the P5+1 package, saying they offered no firm commitments in return for demands that Iran significantly curb its nuclear program. Iran, in turn, says it’s willing to discuss stopping 20% enrichment, but wants recognition of its right to enrich uranium for energy purposes.

“There is no promise in the proposal: There is ‘consideration, thinking, trying,’” Khazaee said.

For instance, the P5+1 proposal would require Iran to stop 20% enrichment, which Iran says it undertakes to fuel a reactor which produces isotopes to treat Iranian cancer patients. But on whether the international offer would then supply fuel for the Tehran research reactor, “they said they will try to consider it,” Khazaee said.

The P5+1 proposal laid out a three-step process. As a first step, Iran is being asked to stop its 20% enrichment, ship out its stockpile of 20% uranium, and close the fortified Fordo enrichment facility.

“Step two was capping enrichment at 5% as well as [ending production of] the heavy water in Arak, in exchange for ‘thinking, finding a way’ for removal of unilateral sanctions,” the Iranian envoy said.

The third step “is that Iran should implement fully the Security Council resolutions [requiring Iran to suspend all enrichment],” he said. “Then they will ‘consider’ remov[ing] the [UN] sanctions.”

Another element in the P5+1 package involves spare parts for Iran’s aging civilian airlines, a perennial incentive dangled before Iran. The proposal, according to the summary released by the Iranians, says that the P5+1 “is prepared to permit safety-related inspections.”

“This means go and get the permission of OFAC and do this and that and blah blah blah,” Khazaee said, referring to the US Treasury Department’s Office of Foreign Assets Control, which tightly controls all US economic interaction with Iran. “This is a humanitarian issue,” Khazaee continued. “People are getting killed because of the [plane] crashes. Put yourself in Iranian shoes.”

Given the wide discrepancy between positions, it is difficult to envision significant progress although there appears to be a mutual decision to continue talking. Khazaee said that Iranian policymakers are skeptical that Western powers are prepared to close a deal with Iran, especially in advance of US presidential elections.

“The main problem in my view is the mistrust that exists between the two sides, especially from the Iranian side,” Khazaee said. “We have to find a way to overcome this mistrust. As long as mistrust and lack of confidence exists, whatever we negotiate will not work.”

Western negotiators have expressed similar doubts about whether Iran’s leadership is prepared to compromise, given Iran’s request that it receive upfront recognition of its right to enrich before agreeing to stop 20% enrichment. Khazaee said, however, that agreement was possible.

“The issue of the 20% enrichment is the first proposal of the P5+1 and the third proposal of Iran,” Khazaee responded. “So [this] is an issue that could be discussed and decided. It is not off the table.”

“I do not think it is impossible,” Khazaee said. “It is possible to close the gap. Based on good will, respect, preserving the Iranian nation’s right” — a reference to Iran’s insistence that its right to lower level enrichment for energy purposes be recognized — “ not harming them.”

Asked if the Iranian leadership really wants a deal, Khazaee said “it depends on how we define the deal, but the seriousness of the Iranians for negotiations is an indication.”

“We should not expect that this process is a short-time process or a solution will come after just a few rounds of negotiations,” the envoy added. “Because it is not only the nuclear issue, it is the whole idea of decades of mistrust and hostility.”

by Murielle KASPRZAK and Joseph SCHMID | AFP | May 26, 2022
END_OF_DOCUMENT_TOKEN_TO_BE_REPLACED