Two days of talks between Iran and six nations ended Thursday in Baghdad with no breakthroughs but a plan to meet again next month, write Al-Monitor's Laura Rozen and Barbara Slavin. Chief European Union negotiator Catherine Ashton said that while discussions made it clear while "that there is some common ground … significant differences remain.” 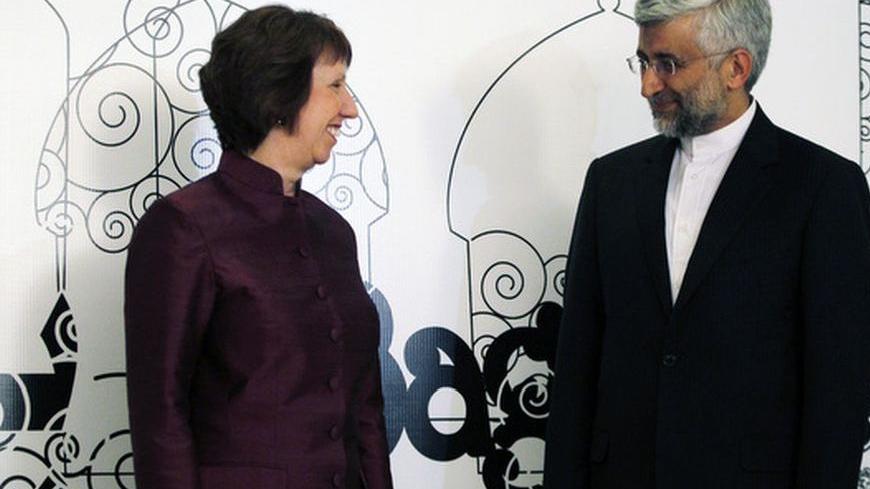 BAGHDAD — Iran and six nations ended two days of “intense” and difficult nuclear talks in Baghdad late Thursday with no breakthroughs but a plan to meet again in Moscow next month.

Chief European Union negotiator Catherine Ashton said that while the discussions made it clear that while “we both want to make progress and that there is some common ground … significant differences remain.”

The talks focused on a proposal from the five permanent members of the UN Security Council plus Germany — the so-called P5+1 — aimed at ending Iran's enrichment of uranium to 20%. The proposal — an updated version of a package Iran accepted then rejected in 2009 — included fuel for a vintage US reactor that produces medical isotopes for 800,000 Iranian cancer patients, safety upgrades for the reactor and for Iran’s lone civilian nuclear power plant at Bushehr plus spare parts for Iran’s ancient Boeing airliners.

In return, Iran was asked to stop enriching uranium to 20% U-235, send out its stockpile of more than 100 kilograms of that uranium and eventually close operations at a plant dug into a mountain near the holy city of Qom. European sanctions preventing the purchase of Iranian oil as of July 1 would go forward.

Notably, the six powers did not make public the detailed package they had proposed to Iran — as Western diplomats indicated at the beginning of the talks they planned to do.

“In line with our agreement in Istanbul, the E3+3 [what the Europeans call the P5+1] laid out clear proposals to address the Iranian nuclear issue and in particular, all aspects of 20%-enrichment,” Ashton said.

The Iranians presented their own five-point proposal that called for formal recognition of their right to enrich uranium for civilian use as well as broader discussions on other regional issues.

A senior US official in Washington, speaking on condition of anonymity, told Al-Monitor that the results of the session in Baghdad, which followed meetings in Istanbul in April that did not delve into substance, were “pretty slim pickings.”

On the other hand, no one expected a breakthrough in what amounted to the first detailed nuclear negotiations with Iran in more than two years.

“If there had been a deal yesterday, people on both sides would have said … we gave in too easily,” George Perkovich, a non-proliferation expert at the Carnegie Endowment for International Peace, said Thursday at a Washington event sponsored by the National Iranian American Council (NIAC).

Ashton announced that another meeting would be held in Moscow, with delegations arriving June 17 and meeting June 18-19. She described the two days of discussions with the Iranians in Baghdad as “very intense and detailed.”

American and European diplomats said they intended to continue a dual-track policy of pursuing more intensive diplomacy with Iran aimed at curbing its most sensitive nuclear work, while at the same time moving forward with tough new sanctions on Iran’s energy and finance sectors.

“Maximum pressure is not yet being felt in Iran,” a senior American diplomat told a group of journalists at the conclusion of the Baghdad talks, on the condition of anonymity. European Union sanctions on Iranian oil and US sanctions on Iran’s Central Bank, both due to be fully implemented in July, “increase leverage on the negotiation as it proceeds forward,” the offical said.

“The Iranians don’t like it," the diplomat continued. "They hope and would rather we not put additional sanctions on. Indeed they are not at all pleased that soon after Istanbul, the president [Barack Obama] signed a new executive order [sanctioning Iran for supplying technical assistance to Syria to repress dissidents]. We heard about that.”

“We have the dual-track policy, and we believe that policy works and is effective,” the official said. “It will take some time for all of that to play out. We will do whatever we need to do to make that effective.”

Iran appeared to have higher hopes for the talks.

“There was a mismatch between Tehran’s expectations and what was feasible in Washington and the European Union,” Bijan Khajehpour, an Iranian business consultant based in Austria, told the NIAC conference in Washington. “The Iranians expect more and also are right to expect more.” Despite public complaints about new sanctions, however, Iran’s nuclear negotiators actually talked less about the issue inside the closed-door meetings in Baghdad than they did last month in Istanbul, American and European diplomats told Al-Monitor. The diplomats surmised that Iran may have “overplayed” the sanctions card in Istanbul and exposed its vulnerability.

Sand storms swirled outside the cool marble Baghdad Guest House where the Iraqi government hosted the talks. but western diplomats said they found the venue site with its open meeting spaces highly conducive to formal and informal meetings.

Chief US negotiator Wendy Sherman managed a brief exchange with her Iranian counterpart, Iran’s Secretary of the Supreme National Security Council Saeed Jalili, on Thursday, something that eluded her during the Istanbul meeting.

"At the end of today’s plenary, Dr. Jalili approached [Sherman] to chat for a minute or two,” the senior U.S. official said, adding that “there’s a recognition that we are beginning to understand and communicate and talk with each other.”

Sherman was traveling from Amman, Jordan to Israel on Friday to brief nervous Israeli officials about the results of the talks.

Iran had proposed three possible venues: the capitals of Kazakhstan, China or Russia.

The P5+1 diplomats agreed on Moscow.

“The momentum on negotiations is taking on a life of its own,” Joel Rubin, who directs Iran policy for the Ploughshares Fund, told Al-Monitor by email. “Ironically, the administration's strategy of forcing choices on Iran so that it will come to the table may be bearing fruit more quickly than Washington is able to absorb. This is a manageable challenge, as the administration both wants to simultaneously show progress while not raising expectations.”

“Political forces in Washington will be very reluctant to endorse a nuclear deal right away, due to deep skepticism about Iranian follow-through, so any deal needs to keep momentum and show tangible results,” Rubin added.

Given the bitter history between the US and Iran, few experts believe that a lasting solution to the nuclear crisis or other disputes with Iran is likely at this stage, especially as the United States is in a presidential election year. Instead, the goal is to manage the situation so that Iran does not acquire nuclear weapons and there is not another war in the Middle East.

“The sweet spot is for Iran to have a capability but not weapons,” Perkovich said. He said a realistic goal would be to make sure, through intrusive inspections, that Iran would remain at least two years away from the ability to make a bomb.

“We should want them to keep leverage,” Perkovich said. If the US demands that Iran entirely give up its enrichment of uranium, he said, they are bound to cheat on a nuclear agreement like the North Koreans did.

Laura Rozen writes the Back Channel news blog for Al-Monitor and covered the talks in Baghdad and Istanbul. You can follow her on Twitter at @lrozen.

Barbara Slavin, Washington correspondent for Al-Monitor, contributed from Washington. Slavin is also a senior fellow at the Atlantic Council, focusing on Iran. She tweets at BarbaraSlavin1.