The West’s current goal in dealing with Iran is not to resolve the crisis but to manage it by preventing the development of Iranian nuclear weapons. The best way to reassure the P5+1 that Iran cannot  “dash to a bomb” is by freezing its stockpile of 20% enriched uranium, especially at the well-protected Fordow facility. Barbara Slavin reports. 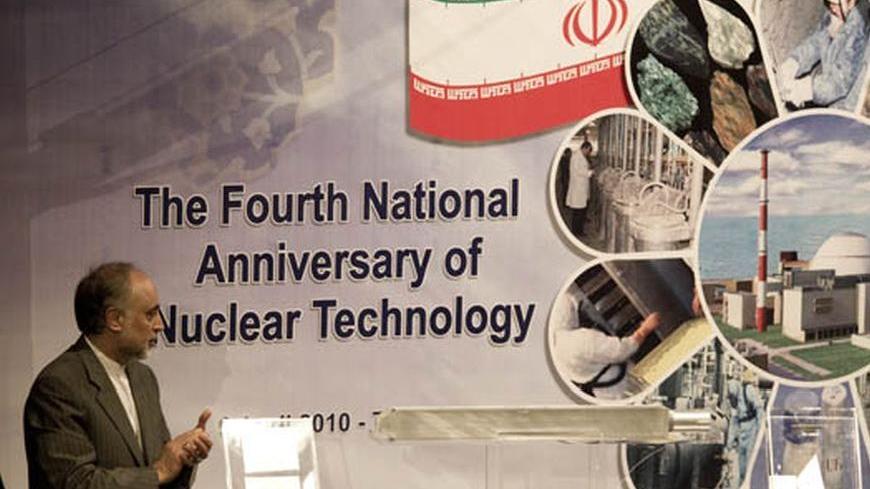 Salehi, head of Iran's Atomic Energy Organisation claps as he looks at object representing nuclear fuel which will be used in Tehran's research reactor 09/04/2010.

As diplomats from Iran and the world’s big powers assemble in Istanbul on the inauspicious day of Friday 13, the key to managing the Iranian nuclear crisis lies deep in a mountain near the Shiite theological center of Qom.

There at a facility called Fordow, Iran has been enriching uranium to 20% U-235, the isotope that in 90% concentration can be used to make nuclear weapons.

Iranian officials have been offering to curb enrichment at the 20% level since last fall, when President Mahmoud Ahmadinejad raised the subject with reporters on the sidelines of the UN General Assembly. However, Iran dithered over accepting new talks with the P5+1 (the five permanent members of the UN Security Council plus Germany) until February 2012, when the pressure of new economic sanctions began to mount.

From the point of view of the P5+1 — and a nervous Israel — Iran has to do something dramatic to inhibit its ability to make a nuclear weapon quickly if it so chose. The best way to insure that it cannot “break out” and dash to a bomb is by freezing its stockpile of 20% enriched uranium, which can be converted in a matter of few months to weapons grade.

According to the International Institute for Science and International Security (ISIS), a Washington think tank that closely monitors Iran’s nuclear program, Iran’s current stash of 20% enriched uranium — about 100 kilograms — is half the amount needed to make a nuclear weapon if further enriched. Thus if Iran stops producing more 20% enriched uranium, that would instill confidence that it is not in a position to break out anytime soon. Under this scenario, Iran could continue to make 3.5% enriched uranium, which is typically used to fuel civilian nuclear reactors.

In an interview with Al-Monitor Monday [April 9], US Deputy Secretary of State William Burns said the Obama administration hopes “that Iran will come to the negotiating table prepared to get down to business and to reach agreement on early, concrete steps.”

A week earlier at a conference in Istanbul, Secretary of State Hillary Rodham Clinton mentioned “ending the enrichment of highly enriched uranium to 20%” as one way for Iran to prove — as its Supreme Leader Ayatollah Ali Khamenei recently affirmed — that it considers building nuclear weapons to be a “great sin.”

It is especially crucial that Iran stop making 20% enriched uranium at the Fordow facility. That would address Israel’s concerns that it cannot effectively target a plant that is protected by 90 yards of rock.

Iranian officials have ruled out shutting Fordow down entirely, but might freeze 20% enrichment there and at another facility at Natanz.

“The job is being carried out based on need,” he said. “When the need is met, we will decrease production and it is even possible to completely reverse to only 3.5% [enrichment levels].”

According to ISIS, Iran already has enough 20% enriched uranium to fuel the reactor in Tehran for at least five and perhaps as long as 20 years. Abbasi has spoken of building other such reactors but it remains unclear if Iran can turn its enriched uranium into workable fuel plates.

The P5+1 could sweeten a deal by reviving an offer to send Iran fuel for the Tehran reactor and even to provide new civilian technology to deliver electricity — an offer that has been on the table since negotiations with Iran in 2006.

The biggest incentive the West could provide would be to delay new sanctions set to cut off Iran’s oil exports to Europe by July and further limit its ability to conduct international financial transactions.

In the run-up to this weekend’s talks, media outlets in both the US and Iran have been full of purportedly authoritative leaks. Iran sought to unsettle its adversaries by haggling for days over the venue for the negotiations and is continuing to suggest that future rounds be held in Baghdad, where an Iran-friendly Shiite Muslim government is in charge.

The last talks in Istanbul in January 2011 were an abysmal failure. Iran’s relations with Turkey, the talks’ host, have only worsened since then as a result of differences over the uprising in Syria. However, Turkish Prime Minister Recep Tayip Erdogan has continued to deliver messages to Khamenei from US President Barack Obama, so Iran should have a good sense of the US bottom line.

In Istanbul, Iranian negotiator Saeed Jalili will be dealing with a new American across the table: Undersecretary of State Wendy Sherman, who replaced Burns when he was promoted last year. Sherman, an expert on the North Korean nuclear program in the Clinton administration, has been studying hard to master the Iranian brief.

David Albright, a former nuclear inspector who is the president and founder of ISIS, said he and other experts “have been primed not to expect much” from Istanbul. The Obama administration has “just got burned badly by North Korea,” which is preparing a missile launch and possible nuclear test in violation of a just-reached agreement with Washington, Albright noted. This puts pressure on the US to be even tougher with Tehran.

On the other hand, a Russian proposal for an orderly de-escalation of the Iranian crisis provides a structure for progress if Iran is prepared to move, Albright said.

Given the tortured history of negotiations with Iran, it is hard to be optimistic. Still, the goal is not to resolve the crisis but to manage it so that Iran does not develop nuclear weapons — and the region is spared another disastrous war.

Barbara Slavin is Washington correspondent for Al-Monitor and a senior fellow at the Atlantic Council, where she focuses on Iran.