US experts converge on breakout formula for Iran talks

There isn’t much daylight between the Barack Obama administration’s breakout estimates for Iran and that of David Albright, a so-called gatekeeper who is influential on nuclear issues within the expert community and on Capitol Hill. 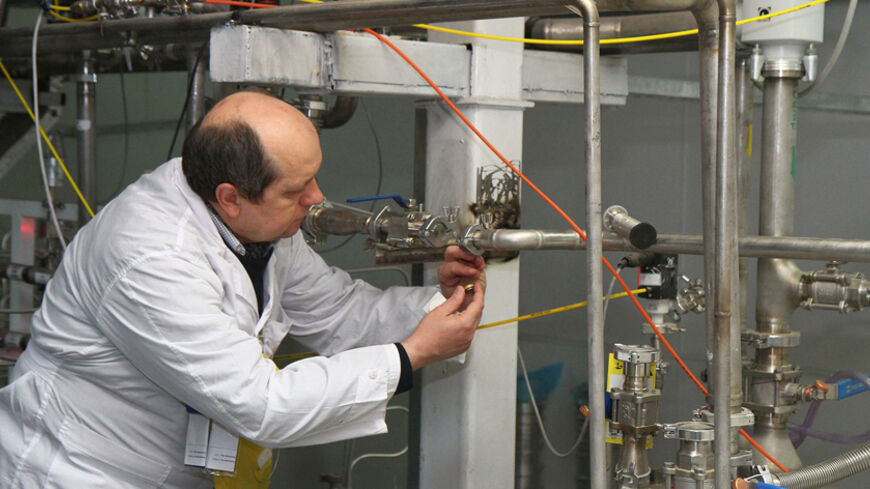 As negotiators close in on a possible nuclear agreement with Iran, David Albright, one of the most widely quoted Washington experts on the issue, says that a formula that allows Iran to operate 6,000 rudimentary centrifuges but keep a stockpile of only 500 kilograms (2,205 pounds) of low-enriched uranium (LEU) would provide assurance that Iran could not produce fuel for a nuclear weapon for a year without detection.

Albright, one of a handful of so-called gatekeepers who frequently testifies about Iran on Capitol Hill, told Al-Monitor on Feb. 23 that he has other concerns about the negotiations, particularly how they will address allegations of past Iranian nuclear research with military dimensions. But when it comes to the breakout period — a key metric that estimates the time it would take for Iran to produce enough weapons-grade uranium for one nuclear bomb if it chose to do so — there seems to be declining daylight between Albright’s position and that of the Barack Obama administration and the rest of the permanent members of the UN Security Council plus Germany (P5+1).

Interviewed by Al-Monitor a year ago, Albright said Iran could meet the breakout goal with several combinations such as 4,000 IR-1 centrifuges and less than 100 kilograms (220.5 pounds) of uranium enriched to 20% of the isotope U-235. Iran has about 19,000 centrifuges installed in two facilities, of which about 9,000 are currently operating.

Under an interim nuclear agreement reached in November 2013 and extended twice, Iran stopped producing 20% uranium gas and converted its stockpile to powder or fuel rods. Iran has continued to enrich uranium to 5% or less, and currently has about 8,000 kilograms (17,637 pounds) in a gaseous form that is easy to further enrich, according to a Feb. 19 report by the International Atomic Energy Agency (IAEA). Iran has reportedly agreed to send out large quantities of LEU, probably to Russia, under a comprehensive accord.

“When we first did work last year, we didn’t envision that Iran would agree … that massive amounts [of LEU] would leave” the country, Albright said. He added that it was crucial to keep Iran’s stockpile of LEU below 1,500 kilograms (3,307 pounds) to make it hard for Iran to dash toward enriching uranium to 90% U-235, the level needed to make nuclear weapons.

Albright, and other independent experts interviewed by Al-Monitor, said they would need to see an entire deal before they could decide whether to support it.

The comprehensive agreement under negotiation will cover other Iranian nuclear facilities, verification measures and a schedule for sanctions relief. It is expected to last about 15 years, with some limitations on enrichment phased out in latter years and others remaining in effect in perpetuity — such as Iran’s pledge not to build nuclear weapons and to remain a part of the Non-Proliferation Treaty.

Albright, who is president and founder of the Institute for Science and International Security, questioned what sort of mechanism could be established for Iran to continuously send out excess LEU.

In an analysis of the latest IAEA report about Iran, Albright and his staff noted that Iran had reduced its average monthly production of 3.5% LEU from 233 kilograms (514 pounds) of gas to about 206 kilograms (454 pounds). Iran did this by reducing the output of the centrifuges — a tactic Albright said Iran could be using as a justification for keeping a larger number of centrifuges in operation.

Other analysts question the emphasis on breakout time, asserting that it underestimates the technical difficulty of making a nuclear bomb and that no country would risk the ire of the international community just to amass enough fissile material for one weapon. “The objective for the United States … should not be focused on any one component [e.g., centrifuge numbers], but instead on obtaining an agreement that creates the conditions that will deter Iran from ever trying an overt or covert breakout to a nuclear weapon,” wrote Ilan Goldenberg, a former Obama administration official who directs the Middle East Program at the Center for a New American Security.

Still, centrifuge numbers remain a focus for much of the expert community and Capitol Hill.

Daryl Kimball, executive director of the Arms Control Association (ACA), told Al-Monitor that the P5+1 is proposing a limit of 300 kilograms (661 pounds) on Iran’s LEU stockpile and reconfiguring Iran’s centrifuge configuration so that the output of LEU would be lower.

“As we wrote in our ACA/ICG [International Crisis Group] proposal in August, by reducing Iran's current operating enrichment capacity by half, disconnecting and removing its 9,000 installed but not yet operating machines, combined with a significant reduction in the size of Iran's low-enriched uranium stocks [to about 200 kilograms] and conversion to more proliferation-resistant oxide form [or removal to a third country], the time it would take Iran to produce enough weapons grade enriched uranium gas for one nuclear weapon would grow to about 9-12 months, possibly more,” Kimball said.

Robert Einhorn, another influential expert and former US nuclear negotiator, told Al-Monitor, “[A] one-year breakout is [the] minimum political requirement for a deal.” Other elements that must be assessed, he said, include how long an agreement will be in effect, what constraints it places on Iran’s research and development, what happens to an underground plant at Fordow and a heavy water reactor at Arak, the disposition of excess centrifuges, the details of “intrusive verification,” resolving possible military dimensions and sanctions relief.

Gary Samore, also a former US nuclear negotiator, expressed surprise at Albright’s calculations, saying that another expert, Scott Kemp, an assistant professor of nuclear science and engineering at MIT, figures that 6,000 IR-1 centrifuges and 500 kilograms of LEU would yield a breakout time of seven months.

“Based on the technical assessments I have seen, it’s not possible to achieve a one-year breakout with 6,000-7,000 centrifuges and a very small stockpile of LEU, so I assume that the US proposal also includes constraints on centrifuge performance, for example, by modifying the cascades to degrade enrichment output,” Samore, who is currently executive director for research at the Belfer Center for Science and International Affairs at Harvard University, told Al-Monitor. “So, the critical question is how we propose to degrade centrifuge performance, how these modifications will be verified and monitored and how quickly they could be reversed.”

For Olli Heinonen, a senior fellow at the Belfer Center and former IAEA deputy director general, 6,000 centrifuges is excessive.

Iran does not have enough natural uranium to provide fuel for its one functioning electric power reactor at Bushehr, for which Russia currently supplies fuel. There are also ample amounts of highly enriched uranium around the world — a legacy of the Cold War — that Iran could obtain for use in reactors that produce medical isotopes, Heinonen said.

Under the 2013 interim agreement, the P5+1 said Iran could have enough enriched uranium to meet its practical needs, which Heinonen estimated could be met by as few as 1,000 centrifuges.

Having sunk tens of billions of dollars into the nuclear program in terms of outright expenditures and lost opportunities for trade and investment, however, Iran is unlikely to agree to such a drastic reduction. To save face, it is trying to keep as many centrifuges as possible while offering other means of providing confidence that it is not aiming to build nuclear weapons.