Iran has made several nuclear advances ahead of talks next week in Kazakhstan, according to the latest report by the International Atomic Energy Agency, reports Barbara Slavin. 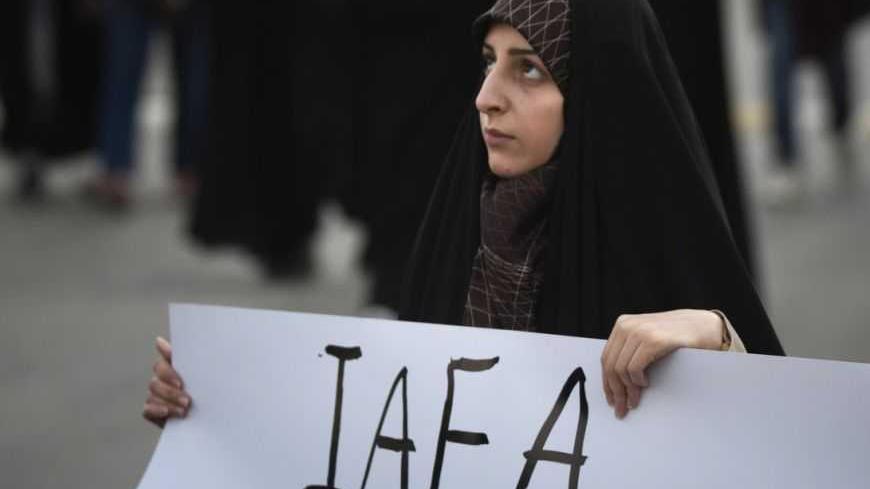 An Iranian student holds a placard as she attends a demonstration before a ceremony to form a human chain around the Uranium Conversion Facility to show her support for Iran's nuclear program in Esfahan, 450 km (280 miles) south of Tehran, Nov. 15, 2011. - REUTERS/Morteza Nikoubazl

Days before Iran sits down with the United States and five other countries to discuss its nuclear program, the International Atomic Energy Agency (IAEA) reported that Iran is planning to use an ostensibly civilian facility to test fuel for a reactor that can yield plutonium.

The finding was among several troubling elements in the new report, which also said that since November, Iran has installed more than 2,250 additional centrifuges at its main uranium enrichment plant at Natanz for a total of 12,669 centrifuges.

Iran has also begun to place more advanced centrifuges at Natanz and has increased its stockpile of 20%-enriched uranium from 135 kilograms to 167 kilograms— closer to, if still below, a threshold of 240-250 kilograms necessary to produce enough material for one nuclear weapon.

“The trend is not good,” David Albright, president and founder of the Institute for Science and International Security, told Al-Monitor.

While Albright assessed that it would still be mid-2014 before Iran could “break out” and dash toward  a weapon if it so chose, he said Iranian activities in defiance of six U.N. Security Council resolutions do not bode well for talks next week [Feb. 26] in Kazakhstan between Iran and the five permanent members of the Security Council plus Germany.

“The depressing news is they think they’re strengthening their position by racing ahead with the installation of all these machines,” Albright said. He acknowledged that it was possible that Iran’s nuclear authorities are not coordinating with negotiators and are simply trying to make as much progress as they can before reaching any international agreement.

Another possibility is that Iran — despite its frequent protestations to the contrary — is seeking to make nuclear weapons or at least become a “virtual” nuclear weapons state with the capacity to build bombs quickly.

Albright said he found most disturbing Iran’s declared intention to test fuel for a heavy water reactor at Arak at the Tehran Research Reactor (TRR), a small facility supplied by the United States to the shah in the 1960s that has been used in the past to produce medical isotopes to treat cancer patients.

The Security Council has repeatedly told Iran not to complete the Arak reactor, which could produce plutonium — another potential bomb fuel — as a byproduct of its eventual operations. According to the IAEA, Iran has stated that it plans to start up the Arak reactor in the first quarter of 2014.

The mingling of civilian and potentially non-civilian activity at the TRR is worrisome, Albright said, and could complicate Western offers to supply Iran with fuel for the Tehran facility.

The good news in the report is that Iran in December resumed sending some of its 20%-enriched uranium for conversion into fuel for the TRR. While Iran has added to its stockpile of 20% uranium since the IAEA's last report in November, it is still below what is believed to be an Israeli red line for possible military action.

Also, while the IAEA reported that Iran has installed 180 so-called IR-2m centrifuges at Natanz, Albright said it was not clear if these more advanced machines had been connected and whether they would even work.

In the lead-up to next week’s talks, Iranian officials have tried to sound optimistic. Iranian Ambassador to the United Nations Mohammad Khazaee told a New York audience earlier this week that Iran would be willing to talk one-on-one with U.S. negotiators — something it has not done since 2009 — if “the right conditions are created.” Vice President Joe Biden offered bilateral talks with Iran in a speech earlier this month at a security conference in Germany.

Khazaee also said that “the level of enrichment is not a red line for us,” suggesting that Iran would be willing to stop enriching uranium to 20% U-235 if its “right” to enrich was acknowledged.

“The whole issue is respecting Iranian rights within the NPT,” Khazaee told a meeting of the Asia Society, referring to the Nuclear Non-Proliferation Treaty, which Iran has signed and which bars it from making nuclear weapons.

According to published reports, the P5+1 is prepared to offer Iran a slight rollback of economic sanctions — on the use of gold and precious metals to compensate Iran for oil exports — if Iran stops enriching to 20%, closes an underground facility at Fordow and sends out its stockpile of 20% uranium.

Barbara Slavin is Washington correspondent for Al-Monitor and a senior fellow at the Atlantic Council where she focuses on Iran. On Twitter: @BarbaraSlavin1.