Iran was prepared to discuss halting 20% enrichment in Moscow, but refused other conditions that could have meant an end to the nuclear standoff. Laura Rozen and Barbara Slavin write that the western members of the P5+1 insisted that Iran meet all the conditions in their proposal, which may indicate that the US has hardened its position. 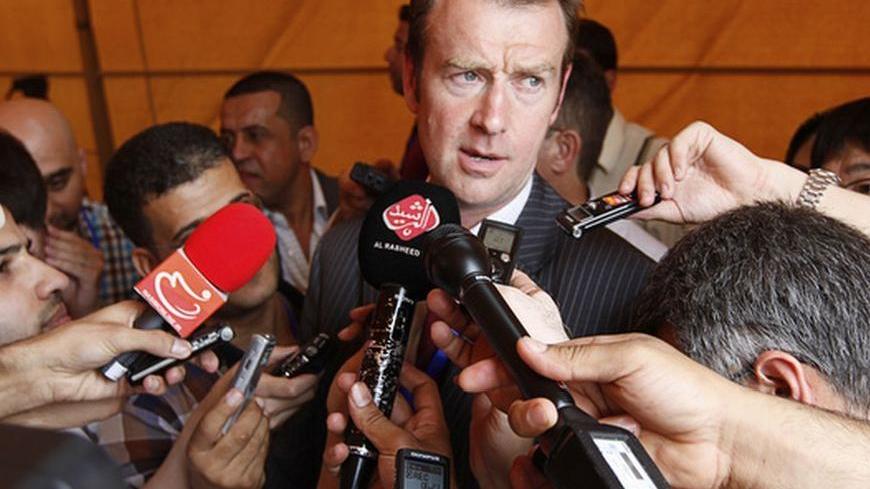 Iran came to talks in Moscow last week (June 18-19) prepared to discuss stopping enriching uranium to 20% but refused two other conditions that could have led to a partial agreement in the nuclear standoff.

Briefings by diplomats whose countries took part in the talks portrayed the meetings as a "dialogue of the deaf," with the two sides trading widely divergent proposals. However, Iran’s chief nuclear negotiator did express willingness to discuss one key step requested by the five permanent members of the UN Security Council plus Germany (P5+1): stopping enrichment of uranium to 20% U-235, the isotope that gives uranium its explosive power.

The western members of the P5+1 insisted, however, that Iran had to meet all three conditions contained in their proposal: stop 20% enrichment, ship out a stockpile of more than 100 kilograms of 20%-enriched uranium and close Fordo, a fortified enrichment facility built into a mountain near Qom.

That stance has led some P5+1 members to conclude that the United States hardened its position in Moscow compared to two earlier sessions in Baghdad and Istanbul, according to diplomatic briefings shared with Al-Monitor.

Previously, American officials had signaled they were planning to take what some called a “Chinese menu” approach to the proposed confidence-building measure aimed at halting Iran’s higher enrichment activities: in essence, the more "items on the menu” that Iran agreed to embrace, the more reciprocal benefits would be on offer. So if Iran, for example, stopped 20% enrichment, it might get fuel for a reactor that makes medical isotopes, or spare parts for Iran’s aging Boeings. Even if Iran agreed to all three steps, western diplomats have said they were unlikely to grant it significant sanctions relief, such as postponement of a European ban on Iranian oil imports or on insurance of oil shipments due to go into effect July 1.

“Earlier, the US had implied that they were ready to address the three E3+3 demands … separately,” a briefing shared with Al-Monitor said, using the terminology Europeans employ for the P5+1. “However, this position had changed in Moscow,” where the US insisted “that the three demands should be treated inseparably, as a package.”

Indeed, after the P5+1 presented its proposal to Iran in Baghdad last month, Washington’s clear expectation was that Iran would not accept it as-is.

“There were two possible scenarios," said Ali Vaez, an Iran analyst at the International Crisis Group, in an interview with Al-Monitor Tuesday. "Either the P5+1’s proposal was no more than an opening salvo,” and it would be willing to negotiate better terms with Iran based on it during the next round, "or with tougher sanctions looming in the horizon, it was simply a take-it-or-leave-it offer. And it turned out in Moscow that Washington was not prepared to offer more.”

What led to the perceived hardening of the US position in Moscow? One P5+1 nation's diplomat surmised that the US was reacting to the perceived “stubbornness” of chief Iran nuclear negotiator Saeed Jalili. Prospects for compromise on the terms of an interim deal also seem to be increasingly constrained by a number of factors, including western skepticism that Iran is serious about negotiations and domestic political concerns, as well as Israeli pressure not to agree to a small deal that might reduce momentum for further economic sanctions.

Jalili, in Moscow, proposed a five-point plan that included international recognition of Iran’s “inalienable right to enrichment” in exchange for Iran’s commitment to the nuclear Non-Proliferation Treaty and agreement to “operationalize” the Supreme Leader’s fatwa against nuclear weapons. Iran also sought the lifting of both UN and unilateral sanctions in return for cooperation with the International Atomic Energy Agency (IAEA) on its longstanding questions regarding suspected possible military dimensions of Iran’s nuclear program. A fourth point included cooperation on nuclear safety and the provision of modern light water reactors. The fifth plank, according to a diplomatic source, was for Iranian inclusion in talks on regional security issues, including Syria and Bahrain.

The Iranian proposal was also seen as an overreach by all P5+1 members, including the two delegations Iran usually sees as more sympathetic, the Russian and Chinese. (China’s delegation was judged not to be very active in Moscow, perhaps because China’s chief negotiator couldn’t come and was substituted by his deputy, Le Yucheng.)

“The Iranian delegation arrived well-prepared and presented a more detailed proposal … compared to previous rounds,” Russian diplomats assessed of Moscow. But “there was no movement towards a compromise … It was clear that the [P5+1] package was not acceptable to Iran.” Iranian pressure for an experts meeting “was interpreted as an Iranian attempt to resolve the issue, but also to buy more time.”

“Both sides are looking to buy time, but for entirely different reasons,” the ICG’s Vaez said. “The West appears to be waiting for the new onerous sanctions to sink in and render Iran more amenable to compromise. In mirror image, Iran seemingly believes that President Obama will be in a better position to offer genuine concessions after reelection.”

So-called technical experts from the P5+1 and Iran are due to meet in Istanbul on July 3.

The US team to the Istanbul talks will be led by Bob Einhorn, the State Department Iran sanctions czar and a veteran nonproliferation expert, a US official told Al-Monitor Tuesday. Iran's team may be led by Ali Ashgar Soltanieh, Iran's envoy to the IAEA, Iran experts heard, noting that had not yet been confirmed.

Barbara Slavin is Washington correspondent for Al-Monitor and a senior fellow at the Atlantic Council, where she focuses on Iran. She tweets at @BarbaraSlavin1