President Barack Obama signed an executive order Tuesday that bars anyone who violates existing U.S. sanctions against Iran and Syria from gaining access to U.S. financial and commercial systems. Barbara Slavin and Laura Rozen analyze whether Iran will get the sanctions relief it is seeking from nuclear talks scheduled for later this month. 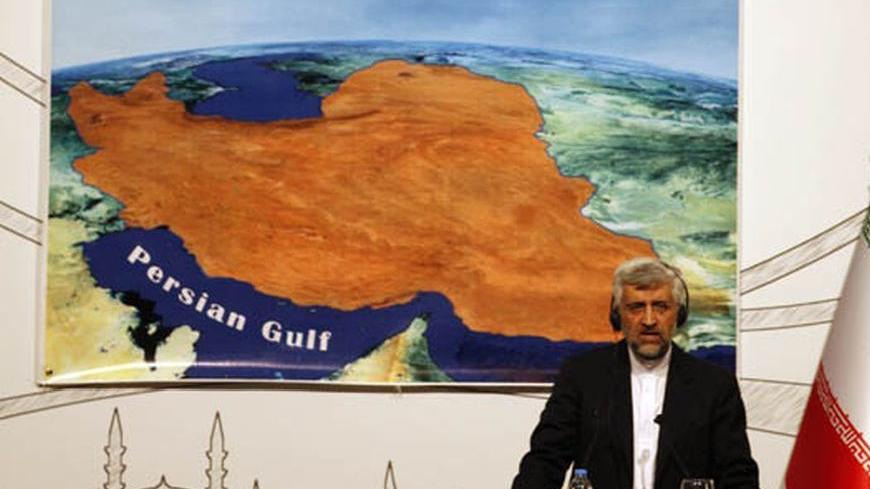 As Iran ponders whether to accept curbs on its nuclear program, it worries less about the possibility of foreign military attack than about the relentless onslaught of economic sanctions that are squeezing its oil-based economy.

U.S. and European officials have said that only tangible progress in the talks due to resume in Baghdad May 23 could convince them not to fully implement measures this summer that will bar Iran from selling oil to Europe and make it harder for Iran to receive payment from remaining customers.

But it is unclear whether Iran will get the degree of relief it seeks in return for the kind of measures it is likely to embrace. Such a mismatch could jeopardize already uncertain prospects for progress.

If Iran, for example, agrees to stop enriching uranium to 20 percent U-235 — a concession Iran has been floating since last year — the most it might get in return is a brief delay of the European oil embargo and a moratorium on new punishment. Even that is not certain. It is possible that Iran would only receive fuel for a reactor that makes medical isotopes — resurrecting a confidence-building measure that foundered in 2009.

“They won’t get dramatic relief,” predicts Clifford Kupchan, an Iran expert at the Eurasia Group, a consulting firm.

While the Barack Obama administration says it follows a two-track approach to Iran that combines diplomatic engagement with economic pressure, pressure has taken precedence in recent years.

Sanctions have been a major factor in bringing Iran back to the table after a lapse of more than 15 months.

Although Iranians are practiced in circumventing economic restrictions, it is facing an unprecedented “downward spiral of negative economic phenomena,” according to Bijan Khajehpour, a Vienna-based business consultant.

Over the past six months, the Iranian currency, the Rial, has lost nearly half its value, plunging to 20,000 to the dollar before recovering slightly after the April 14 nuclear talks in Istanbul. Unemployment and inflation are both in double digits and rising. In anticipation of the July 1 embargo, many European countries have already stopped buying Iranian oil. Iran has been forced to sell crude largely through barter to remaining customers in Asia and is storing millions of barrels on tankers in the Persian Gulf.

Afterwards, Iranian state media declared the talks a success in an apparent effort to prepare the ground for concessions as well as to boost public morale.  But there is also unease among some Iranian hard-liners that their negotiators may seem too eager for a deal and will come away with minimal returns.

Stressing sanctions is a sign of weakness, the newspaper Iran wrote in an editorial on Monday (April 30): “This is a wrong repeated message,” according to a translation by Mideast Mirror, a London-based service. “It burns our trump cards and has caused the Western side to have dangerous and wrong evaluations of what the Iranian people and officials actually want from the Baghdad negotiation.”

The largely positive spin risks a backlash if the talks fail to produce tangible relief for the Iranian economy.

Even as the talks proceed, the U.S. has imposed new sanctions. An executive order signed by President Barack Obama Tuesday (May 1) bars access to the U.S. financial and commercial systems to anyone identified as violating or attempting to violate existing U.S. sanctions against Iran or Syria.

More measures are awaiting final action in the U.S. Congress.

The Iran Sanctions, Accountability and Human Rights Act of 2012 would block U.S. visas and freeze U.S. assets for those who provide Iran with riot control or Internet jamming equipment and also bar top executives of foreign companies that do other proscribed business with Iran. A proposed amendment to the bill would prohibit U.S. banks from dealing with foreign banks that have any transactions with any Iranian banks — not just the 23 already blacklisted by Washington.

Mark Dubowitz, executive director of the Foundation for Defense of Democracies, a Washington think tank that has advised Congress on sanctions legislation, says this is the time to intensify sanctions. He notes that there are 8-10 Iranian banks that have not been designated by the U.S. Treasury Department and 14 Iranian banks that have not been barred by the Society for Worldwide Interbank Financial Telecommunication or SWIFT, a Brussels-based organization that facilitates international financial transactions.

Dubowitz also advocates designating Iran’s energy sector as a “zone of proliferation concern” barring every energy-related transaction except for oil trades allowed under legislation passed last year. (The Obama administration has exempted Japan and 10 European countries from these new sanctions because they have “significantly reduced” their purchases of Iranian oil. The administration has until June 28 to persuade other countries buying Iranian oil to follow suit.)

“When the Iranian regime stops enrichment, ceases the construction of more centrifuges, admits that it has engaged in weaponization activities, and agrees to intrusive inspections under the Additional Protocols, then the U.S. administration can consider stopping sanctions,” he told Al-Monitor in an email.

“Iran is at the table because their oil wealth is now under the greatest threat since the days of the Iran-Iraq War,” he said. “And only intensifying sanctions, and the regime’s belief that the U.S. has the will to destroy Iran’s nuclear weapons program if it doesn’t yield, can create any chance of a negotiated agreement that meets the requirements of multiple U.N. Security Council resolutions.”

Iran will certainly not go as far as Dubowitz demands anytime soon. Claiming that its nuclear program is peaceful, it insists on continuing some uranium enrichment though it might accept curbs on the level of enrichment as well as more thorough inspections.

This raises the question of what it might get in return for such concessions and whether this issue could divide its interlocutors in the P5+1 — the five permanent members of the U.N. Security Council plus Germany.

A Western diplomat, who spoke on condition of anonymity, told Al-Monitor that in the past, Iranian intransigence had succeeded in unifying the P5+1. Even Russia, a sometimes defender of Iran, has accepted a tough stand because it “doesn’t like being taken for a fool,” the diplomat said.

But the P5+1 has yet to decide how to react, he said, if Iran freezes 20 percent enrichment or promises to take other steps, such as stopping enrichment at Fordo, a facility near Qom that is under 90 yards of rock.

“If they really do something, it would change the game,” the diplomat said. “We’ve never believed that they were serious…If they manage to give us the feeling that this is for real, we need to think about what we could do.”

Other sources briefed on the deliberations have described the current thinking as presenting Iran with a “Chinese menu” of options. If Iran agrees, for example, to suspend 20 percent enrichment, send out its stockpile of that uranium and stop operations at Fordo, then it would get X, Y, and Z: hypothetically, fuel for the Tehran research reactor, suspension of E.U. oil sanctions and perhaps spare Boeing parts for its civilian aircraft. If Iran agrees to just one or two of the concessions, it might get just fuel for the reactor.

The lead US negotiator to the P5+1, Undersecretary of State for Political Affairs Wendy Sherman, has been given discretion to negotiate based on such a menu of options, whose exact nature is being closely held. Western negotiators are hoping more may be worked out at preparatory meetings prior to the Baghdad talks which are to be led by the EU’s Helga Schmid and Iran’s Ali Bagheri and conducted with a minimum of publicity.

“We’re expecting to have some preparatory meetings at a lower level,” State Department spokeswoman Victoria Nuland said at a press briefing Monday. “Those have not begun yet, but I think that’ll help flesh out where we are. …Now we want to see some concrete proposals, and we would be prepared to respond to those.”

The Iranians, Nuland added, “have got to come forward with a plan.  We would be prepared to respond to real concrete steps, but we have to agree on what those are going to be.  And then we have to go from there.”

The atmosphere for compromise in the West is not propitious, however. Europe has been increasingly hawkish toward Iran, while the U.S. is in a presidential election year. Sanctions advocates such as Dubowitz, most members of Congress and the presumptive U.S. Republican party candidate, Mitt Romney, will be loath to give Iran — or Obama — much maneuvering room.

Barbara Slavin is Washington correspondent for Al-Monitor and a senior fellow at the Atlantic Council, where she focuses on Iran. She tweets at BarbaraSlavin1. Also contributing to this column was Laura Rozen, who reports on foreign policy from Washington, D.C. She has written for Yahoo! News, Politico and Foreign Policy. Follow her on Twitter @LRozen.